A few years ago I was approached with a tempting offer that I'll bet many of you would jump at the chance to accept. 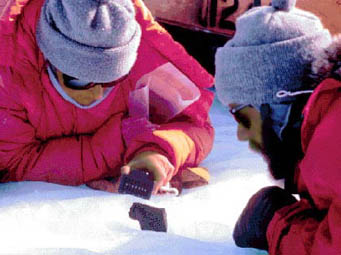 Members of an ANSMET team examine a meteorite found atop the ice in Antarctica.

It came from Ralph Harvey, who coordinates the U.S. National Science Foundation's annual expedition to collect meteorites in the ice fields of Antarctica.

"Hmm," I thought, "what an opportunity!"

But then reality sunk in. Among other things, it would've required a two-month commitment. At the time, I was so swamped with work at Sky & Telescope that I just couldn't get away for so long. And for most of that time I'd be wrapped up in so many layers of protective clothing that my wife would have had trouble telling me apart from the Pillsbury Doughboy. So I declined Ralph's offer.

But what an adventure that would be! Ever since 1976, teams of scientists have headed to Antarctica every austral summer to scoop up meteorites by the thousands that are just lying there atop the ice.

It's not that stones fall from the sky near the South Pole more often than anywhere else. But when they do plop onto Antarctica's ice fields, they sometimes migrate with the floes until they encounter a mountain range. Then the floes can stall, and over time the plateau's fierce, dry winds relentlessly evaporate (technically, sublimate) huge volumes of ice and snow. But the meteorites stay put, and over hundreds of thousands of year they accumulate atop the icy surface.

The NSF's Annual Search for Meteorites (ANSMET) is once again at the bottom of the world, where it's midsummer. Today, for example, it's a balmy -8°F (-22°C). Japanese meteoriticists have joined the annual pickup game as well, though they're elsewhere on the continent.

Now, thanks to modern technology, you can follow the exploits of Harvey, Dave "Duck" Mittlefehldt, John Schutt (aka “Johnny Alpine”), and four other adventurous souls with them. Check out the team's near-daily field dispatches for all the exciting details. The team will remain "Really Down Under" through January.

And, Ralph, if you're reading this, I'm willing to reconsider!

I'm always impressed how easy seems to grab so many sky rocks on the ground in Antarctica and Atacama deserts. The truth about such exloration is much more hard, I guess. Months of organizational work, crazy logistics and some money by big 'M'. Despite this, harvesting of these peebles from the Space and Beyond is still my unreachable dream. And of course, another ALH perhaps-life-carring rock is waiting for discovery just next step ahead exposed by the furious polar wind. Good Luck!

Q: Will meteorites explain the origin of life on Earth? It appears that some hold to this philosophy of origins. Efforts demonstrating how evolution can work on a meteorite so it evolves into a bacterium could prove interesting. As some in science know, if it is alive, it isn’t simple. Perhaps posters could view Ben Stein’s, ‘Expelled No Intelligence Allowed’ it is out on DVD and ponder the question - how did life originate on Earth?

What a tit for declining the trip. stop giggling!