A small asteroid slammed into the Martian surface sometime between March 27 and 28, 2012, creating a crater swarm in the ground. The largest pit is 159 feet across.

Mars is turning out to be a useful laboratory for impact specialists. Aside from the occasional meteorite spotted by NASA's rovers, cameras on orbiting spacecraft can readily spot new craters in the Martian surface. Sometimes they're seen as splashes of bright, fresh ice against an otherwise drab landscape, and sometimes they create dramatic ray patterns.

These aren't the sorts of serendipitous discoveries that result from some automated image-comparing algorithm. Instead, finding fresh craters still relies on sets of human eyeballs scanning the wealth of spacecraft imagery coming back from the Red Planet.

Such was the case with a fresh impact spotted about two months ago. The telltale evidence wasn't found in the super-high-resolution snapshots of the HiRISE camera on NASA's Mars Reconnaissance Orbiter. Instead, it showed up in the daily "global weather" views returned by MRO's wide-angle Mars Color Imager (MARCI).

Bruce Cantor, the deputy principal investigator for MARCI at Malin Space Science Systems (which built it), was looking for dust storms and other weather-related events when he chanced upon a suspicious-looking dark smudge near the planet's equator. "Something caught my eye," Cantor recalls in a NASA press release. "It looked unusual, with rays emanating from a central spot."

His interest piqued, Cantor looked through dozens of other MARCI views of the area. Remarkably, it wasn't in the snapshot from March 27, 2012, but it was in a view taken the next day. Researchers have used such before-and-after image pairs to identify about 400 fresh impacts on Mars — but this is the first found using MARCI.

When the powerful HiRISE camera was commanded to take a closer look last month, it found a pair of fresh craters surrounded by about a dozen "secondary" pits. The larger, oval-shaped impact, 159 feet (48½ m) across at its widest, is unusual — "quite shallow compared to other fresh craters we have observed," notes HiRISE principal investigator Alfred McEwen (University of Arizona).

It's not possible to deduce the exact size and velocity of the impactor, but McEwen reasons it was likely less than 20 feet (5 m) across. Mars has such a thin atmosphere that asteroidal fragments of this size can routinely slam into the surface almost unimpeded, whereas they'd typically disrupt harmlessly high in Earth's atmosphere.

"This is an interesting new crater," impact specialist Peter Schultz (Brown University) told me. "It illustrates the effect of a very soft target (highly porous and loose), which resulted in extensive collapse — loss of the rim and infilling of the floor."

Also telling is that the secondaries are close by, and only on one side. This, combined with the double main pit, argue that the incoming object must have broken into many pieces before reaching the surface. Since the Martian atmosphere is so thin, a highly oblique hit is suspected. "The circularity resulted from the extensive collapse due to the unconsolidated nature of the target material," Schultz explains.

Schultz believes this terrain is a deep, loose layer of loess (geospeak for "dirt") consisting of volcanic ash or ancient polar deposits. Fresh-looking landslides in the area could have been triggered by a shock wave from the impact.

Cassiopeia A in 3D 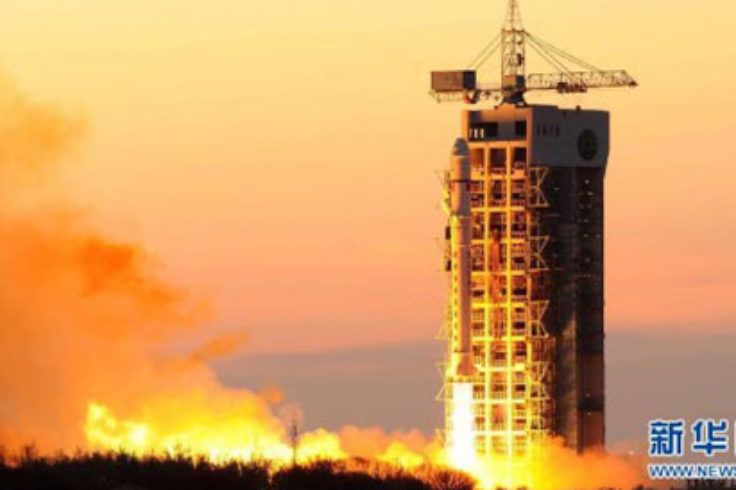