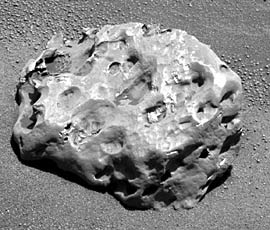 Tests have confirmed that the basketball-size Heat Shield Rock, imaged here by Opportunity's panoramic camera, is a meteorite composed primarily of iron and nickel. Note the small 'blueberries' that surround the meteorite.

On December 21, 2004, the Mars Exploration Rover Opportunity arrived at its own discarded heat shield, enabling engineers to study the effects of atmospheric entry up close so they can design better landing systems for future missions. But rover images of the shield revealed something else interesting just a few meters away: a pitted, metallic-looking rock the size of a basketball. Opportunity's handlers immediately speculated that the rock was a meteorite. Tests conducted earlier this week with Opportunity's spectrometers prove that this hunch was correct. The so-called "Heat Shield Rock" is indeed a meteorite composed mostly of iron and nickel. It is the first meteorite discovered on another planet.

"This is a huge surprise, though maybe it shouldn't have been," says mission principal investigator Steve Squyres (Cornell University). "I never thought we would get to use our instruments on a rock from someplace other than Mars. Think about where an iron meteorite comes from: a destroyed planet or planetesimal that was big enough to differentiate into a metallic core and a rocky mantle."

Heat Shield Rock is unlikely to tell scientists much that they don't already know about meteorites. But project scientist Joy A. Crisp (NASA/Jet Propulsion Laboratory) notes, "There are some other things we might learn about Mars from this meteorite. Any changes in the rock's outer surface might be the result of weathering in the Martian environment. We can also make inferences about the atmospheric conditions that allowed a meteorite of this size and type to make it to the surface." 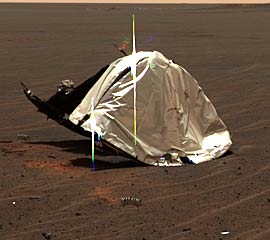 Oppportunity's panoramic camera acquired this near-true-color image of the rover's own heat shield. The gray rock immediately to the rear of the shield's left side is an iron meteorite.

If Opportunity stumbles across other meteorites (which will probably be the more common stony variety), the numbers will tell scientists about the deposition or erosion rate of Meridiani Planum. If the rover fails to encounter additional meteorites, this will indicate that dust is accumulating in the region, burying meteorites. But if more meteorites are found, it will suggest that dust particles are being blown away by winds, exposing previously buried objects.

Opportunity may have a chance to find more meteorites in about a week, when it leaves its heat shield and heads on a long trek toward a small crater named Vostok located 1.2 kilometers to the south.

On the other side of Mars, Spirit continues to make slow but steady progress climbing Husband Hill inside Gusev Crater.