Notes from the Weekend

Over the weekend I checked out Hulu.com. It's the new video-on-demand service that's a partnership between NBC Universal and Fox. 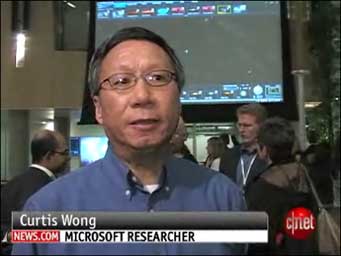 CNET interviews Microsoft's Curtis Wong at a tech conference where he demonstrated his WorldWide Telescope software.

I was curious if I could access it through the Web browser built into the Playstation 3. That way, I figured, I could watch various shows on demand on my living room TV. (Johnny Sokko and His Flying Robot?! Wow, I haven't even thought of that one in decades.) Alas, no dice. It requires the Flash Player 9 plug-in, which the PS3 browser doesn't have — yet.

As I was poking around the shows available on Hulu, I discovered that they have reports from CNET TV. A recent one featured Microsoft's WorldWide Telescope. So if you want to know a little more about this forthcoming product, here's the direct link to the video on Hulu. Otherwise, go to CNET TV and search for it. (Hulu's version is better quality.) 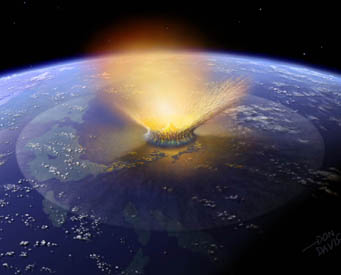 The dinosaur-killing impact 65 million years ago gets a do-over in modern times — in high definition too.

On Sunday, I caught Super Comet: After the Impact on HD Theater, a Discovery Production from last year. I missed the first 15 minutes or so, but I tuned in for the good parts when a big comet strikes the Yucatan and does a good job of wiping out humanity — fireball, tsunami, ash fall, global winter, etc. It's a good show with nice special effects. It has real scientists discussing how they know what would happen, if it ever does again. There were a few "duh" moments, such as once when the screen said "Mauna Lea" instead of "Mauna Kea." It will be on HDT again March 29th at 2 p.m. EDT. It's also available on DVD, so you can get it from Netflix.

And finally, from the Sunday funnies, I couldn't help but find unintentional humor in "The Family Circus." Why, pray tell, are Dolly and Grandma up and fully dressed at about 5:00 in the morning? They didn't seem gussied up enough for Easter sunrise services. Bil Keane got the right orientation for a waning crescent in the Northern Hemisphere (not that this was the actual phase on Sunday), but I don't think he considered what time it would be visible.

I had got a dream to start my own firm, however I didn't have got enough amount of money to do this. Thank goodness my mate told to use the credit loans. Thence I received the bank loan and made real my old dream.