If you're anywhere in central or western North America, mark your calendar to get up early on Saturday, December 10th. That morning the full Moon goes through its last total eclipse until 2014. (If you're on the East Coast or in Europe, you can sleep in that day.) 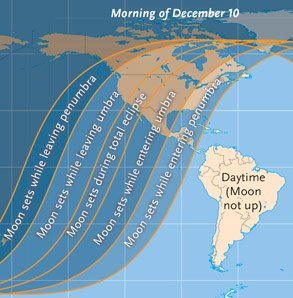 Here are key locations during December's total lunar eclipse. Because an eclipsed Moon is always full, the Sun sets or rises at almost the same time on the opposite horizon. This means that moonrise or moonset will happen in a bright sky. Click on the image for a larger, more complete view.

As the map shows, the farther west you are in the Americas, the better your prospects. From the Pacific time zone you can watch the Moon slip into Earth's shadow completely, while the Moon is sinking low in the west-northwest. In the Northwest you can even see the Moon start to emerge from our planet's shadow before moonset and sunrise end the show.

Observers in the Pacific, Australia, and East Asia have it better. Seen from there, the whole eclipse happens high in a dark sky from start to finish. For Europe and Africa, the eclipsed Moon will be lower in the east during or after dusk on the evening of the 10th.

When the Moon is totally eclipsed, it glows eerily orange, red, or dark bloody brown. Although the Moon is completely inside Earth's shadow at that time, it's still dimly lit by sunlight that skims the edge of Earth and is refracted into Earth's shadow by the atmosphere. What you're seeing on the Moon's face is light from all the world's sunsets and sunrises at the time that you're looking. How bright or dark an eclipsed Moon appears depends on the amount of cloudiness along Earth's sunrise-sunset rim and, especially, the amount of dust high in the upper air. 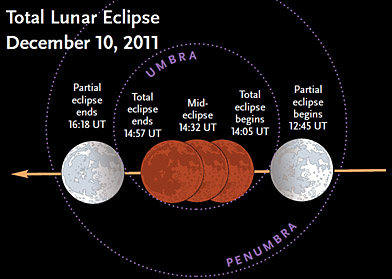 During December 10th's eclipse, the Moon (in Taurus) skims just inside the southern edge of Earthâ€™s umbra, or shadow core. The eclipse is partial while the Moon is moving across the umbraâ€™s edge. Less noticeable are the first and last stages, when the Moon is only in the penumbra, the shadowâ€™s pale outer fringe. Universal Times are given for key events. Click on the image for a larger, more complete view.

For this eclipse the Moon barely skims inside the southern edge of Earth's umbra, as shown at right. So we can expect the Moon's southern rim to remain brighter than the rest — creating a lovely 3-D effect and drama for photographers. To get a good image scale, use a wide-field telescope or a long telephoto lens.

Cloudy? The next eclipse of the Moon will be only partial, happening before and during dawn next June 4th and visible from most of North America except the Northeast.

The next total lunar eclipse doesn't come until the night of April 14-15, 2014. But then the Moon will be high in a dark sky all across the Americas.

• Roger Sinnott continues to collect amateurs' crater timings — telescopic timings of when the umbra's edge crosses lunar craters — as part of a decades-long project tracking slight unpredictability in the umbra's diameter. Click here for crater maps, instructions, and where to report your timings.

• John Westfall seeks naked-eye timings of the eclipse contacts (when the partial phase begins and ends before and after totality) to help calibrate the historical timings made by mariners and others when this was one of the few ways to determine longitude at sea. Use the instructions here.

• Determine the magnitude of the fully eclipsed Moon (if it's in a dark sky at your location) using the reversed-binocular method, and report your result to Richard Keen of the University of Colorado.

• Estimate this eclipse's Danjon number (the traditional measure of a lunar eclipse's brightness or darkness) and report it to Richard Keen of the University of Colorado, to provide continuity with the Danjon numbers of eclipses running back many decades.

• International Measure the Moon Night "will offer a rare opportunity for students, teachers, and the general public to measure the Moon's distance and size duplicating the same techniques -- with a Digital Age twist -- used by Greek astronomers thousands of years ago."

Great article and projects; our post on the hunt for the elusive "selenelion" and other eclipse lore:
http://astroguyz.com/2011/12/05/astro-event-a-fine-total-lunar-eclipse/