Careful skywatchers in the eastern half of North America can watch the full Moon just graze Earth's shadow. 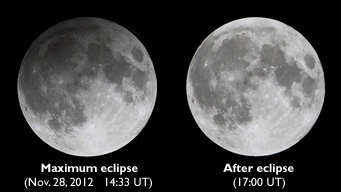 The penumbral lunar eclipse of November 28, 2012. From Quezon City in the Phillipines, Raven Yu used identical camera settings to shot the lunar disk at mid-eclipse and afterward the event ended. Note the changes in appearance of the lunar disk, which here is shown north up. During the eclipse on October 18, 2013, penumbral shading should be most noticeable on the Moon's southern half.

On the evening of Friday, October 18th, the full Moon will glide across the pale outer fringe (penumbra) of Earth's shadow. Mid-eclipse occurs at 23:50 UT (7:50 p.m. Eastern Daylight Time), when the Moon's southern limb will be a quarter of a lunar diameter away from the unseen edge of Earth's umbra, the dark core of its shadow.

Unusual shading on the southern half of the Moon should be fairly plain. Look for the penumbral shadow to move from (celestial) east to west across the disc. You might be able to detect lesser traces of penumbral shading for about 45 minutes before and after mid-eclipse.

As the map at right shows, the event will also be visible in evening from the Caribbean and South America. In Europe and Africa, it happens in the middle of the night with the Moon high in the sky. For observers in western, central, and southern Asia, it happens before or during dawn on the 19th.

Thanks Alan for clarifying that the Earth's penumbral shadow will appear to move across the surface of the Moon from celestial east to west. (Of course the Moon is really moving through the Earth's shadow in the opposite direction as it orbits the Earth from celestial west to east.) When I'm looking at the Moon it feels most natural to me to think of east and west as they would appear on the surface of the Moon: just like here on Earth, as the Moon rotates the Sun rises in the east and sets in the west. We could avoid this ambiguity by using the old fashioned terms "preceding" and "following". The Moon's preceding limb is the eastern limb as seen from the surface of the Moon, and is furthest west in the sky as seen from Earth.

Here's a photo I took here on Conanicut Island close to the peak time of the eclipse:
https://www.facebook.com/photo.php?fbid=527153037367122. You can just make out the slight shading in the photo. It was not visible with the unaided eye. Just a reminder that penumbral eclipses are not exactly awe-inspiring! In fact, I encourage people to ignore them for the most part.

According to the neighbors I alerted about a lunar eclipse, penumbral is a new term for "not even remotely noticeable to the average human."