For those of us at mid-northern latitudes, early to mid-January is the coldest time of year — and the hours before dawn are the coldest time of night. A clear sky means radiational cooling, and a wide-open sky exposes you to the most radiational cooling possible (not to mention wind). And lying still for an hour or more to count meteors means you generate your minimum body heat.

Welcome to viewing conditions for the Quadrantid meteor shower!

Despite the cold, many meteor-watching veterans will tell you that the Quadrantids put on one of the very best displays of shooting stars all year. And this year moonlight will not a factor, because the the Moon is new on the night of January 3–4, when the shower peaks.

The shower is rich but brief, with 60 to 120 or more meteors visible per hour under ideal conditions for just 2 to 4 hours. The peak this year is predicted to come around 1h Universal Time on the 4th, well timed for Europe and Central Asia but a little early for North America (8 p.m. Eastern Standard Time, 5 p.m. Pacific, on the evening of the 3rd).

However, outbursts of Quads have been seen several hours early or late. Also, the meteors that arrive late in this shower tend to be brighter than the early ones. Minor activity has been reported as much as a week before and after the peak date. 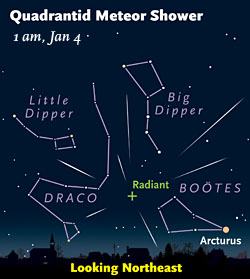 Not until early morning does the radiant of the Quadrantid meteor shower start to rise high. (And donâ€™t expect to see several at once!) This scene is for 40Â° north latitude.

The shower’s radiant (between the end of the Big Dipper’s handle and the head of Draco) is descending toward the horizon at nightfall if you live anywhere north of 37°, and it's circumpolar if you live above latitude 41° north. Very few meteors appear in the sky when a shower’s radiant is this low. But those that do are spectacular “earthgrazers” that skim along the upper atmosphere far across the sky. Just one of these can make your night. So keep an eye out on the evening of the 3rd. Any Quadrantid earthgrazers will be flying from the north-northwest after dusk, from due north around 8 or 9 p.m., and from north-northeast later in the evening.

Not until 1 a.m. does the radiant start climbing high enough in the northeast for the shower to really get cooking. Early risers note: the radiant is highest before the first light of dawn, which is 5 to 6 a.m for most of you.

The shower’s name comes from the defunct constellation Quadrans Muralis, the "mural quadrant," which Joseph-Jérôme de Lalande added to the sky in 1795. He and his nephew used one of these wall-mounted sighting devices for measuring positions of celestial objects.

The shower itself was one of the first discovered. Adolphe Quetelet of Brussels Observatory identified it in the 1830s, shortly after the American discovery of the Perseid shower captured astronomers’ attention and set meteor science on its way.

I received my first loans when I was a teenager and this helped my business a lot. Nevertheless, I require the collateral loan as well.