The Earth-crossing asteroid 4179 Toutatis is making one of its close flybys, gliding among the stars and awaiting your telescope. Its magnitude will be 10.9 to 10.5 from December 11th through 11th. 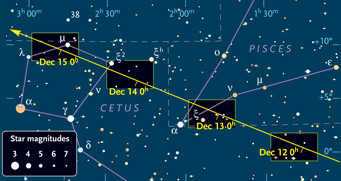 Toutatis is crossing Cetus and Pisces on the evenings of December 11–14 for the time zones of the Americas. The dates here are Universal Time; 0h UT is 7 p.m. on the previous date EST. The black rectangles show the areas covered by the magnified charts below. Click on any chart for a larger version. And here are printable black-&-white charts for use at the telescope. 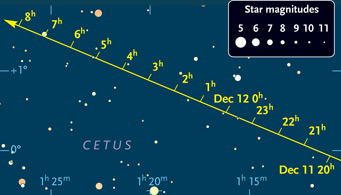 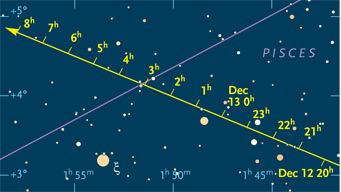 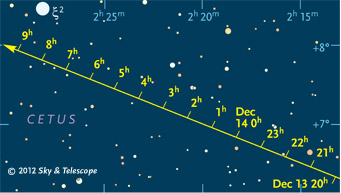 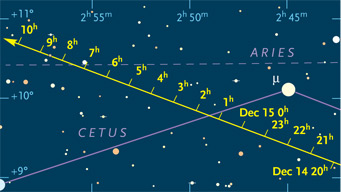 What makes it remarkable is its close passes near us every four years. Astronomers first spotted Toutatis during one of them in 1934 but soon lost it. When it was rediscovered it in 1989, it was named with its possible threat of crashing to Earth in mind. Toutatis was a god of ancient Gaul who’s now best known from the French Astérix le Gaulois cartoons and comic books. In these, the village chief often appeals heavenward to Toutatis to keep the sky from falling, his one great fear. It always works.

Toutatis is in a chaotic 4-year-long orbit that’s currently governed by a 1:4 resonance with Earth and a 3:1 resonance with Jupiter. But the asteroid is tweaked this way and that by its close Earth passes. We’re safe from it for at least the next six centuries, and in the long run, it’s much more likely to be ejected from the solar system than to hit us.

And, no, it won't fall on our heads this month as part of the Mayan calendar end-of-the-world fuss, as some lost souls have been claiming on the internet.

Toutatis passes closest on the night of December 11–12 at a distance of 0.046 astronomical unit (4.3 million miles, 6.9 million km). That's a good 18 times the distance of the Moon. It should then be shining at magnitude 10.9, brightening to a peak of 10.5 four nights later. During that time it’s crossing Cetus and Pisces high in the evening sky.

Our charts here, and our printable black-&-white versions for use with a telescope, plot Toutatis's path for American and European observing hours on those four key nights. The tick marks are labeled with times and dates in Universal Time, so subtract 5 hours to get Eastern Standard Time, 6 hours for Central, 7 for Mountain, and 8 for Pacific. Toutatis will be creeping across the stars at an impressive 20 arcseconds per minute, fast enough for you to see its motion in real time.

Four years ago it didn’t come quite so close. But four years before that (in September 2004) it missed us by just 0.01 a.u., less than a quarter of its distance this time. Its best showing then was for the Southern Hemisphere at 8th magnitude, but many mid-northern observers will remember tracking it low in the south a few days later at magnitude 10.

You can watch the flyby online from the Canary Islands via Slooh (broadcast starts at 5 p.m. EST Dec. 11th), and from the Clay Center Observatory of the Dexter-Southfield School in Brookline, Massachusetts, here: