Well, don't say we didn't warn you. As we hoped all along wouldn't happen, Comet ISON turned into a dud not a dazzle — a speck not a spectacle — a complete, unmitigated flop in terms of any kind of visual display for the world in the December dawn sky. 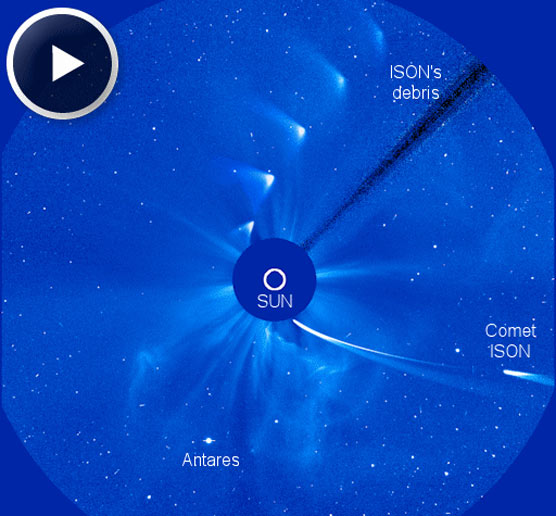 The comet plunges, and wreckage emerges. Click for movie. This is a composite of four days of frames taken by the LASCO C3 coronagraph on the Solar and Heliospheric Observatory (SOHO). The dark blue disk around the Sun is a metal mask blocking the Sun's overwhelming glare, and the black line is the stalk holding it.

But it sure was exciting while it lasted, and never more so than on November 27th and 28th as it approached and then passed through perihelion while spacecraft watched. Our web traffic spiked through the roof as we posted the ever-changing news to our ISON Updates page. Real-time science is incredibly thrilling in the internet age. Especially when a scientific team as dedicated as the Comet ISON Observing Campaign makes so much effort to keep the world abreast of developments as they happen.

To recap: Comet ISON thwarted predictions at every turn. It spent much of 2013 underperforming compared to astronomers' original expectations. Then as it neared the Sun in mid- to late November it livened up, resulting in such exciting (enhanced) imagery as this, this, and this.

Then, as it disappeared down into the glare of sunrise for viewers on Earth, spacecraft took over. In the hours before the comet's fateful Thanksgiving Day roasting at perihelion, its starlike head brightened rapidly to dazzle the SOHO cameras at an estimated magnitude –2, and then just as rapidly the head dwindled away to insignificance compared to the tail, as seen in the movie at the top of this page. Watch a later, fuller version of the fateful four days.

At perihelion, less than one solar diameter from the Sun's surface, the extreme-ultraviolet cameras on the Solar Dynamics Observatory — the only craft able to look so close to the Sun — saw nothing whatsoever. The comet seemed to have evaporated totally.

Scientists glumly pronounced near-obituaries on a live NASA webcast. I was on the verge of titling an update "ISON Now ISOFF."

Then out the other side came a headless dust-and-rubble stream. It regrouped somewhat (as would be expected for a stream decelerating away from the Sun) while hinting at further cometary activity. A brief encounter with a plume of solar wind may have boosted its apparent brightness for a bit. Would ISON live to greet our telescopes and binoculars, at least, after all?

And then the dust cloud did nothing further, other than gradually expand and steadily fade in the lessening illumination as it left the Sun behind.

As I'm writing on Monday, this utterly inactive "ghost of ISON" is 8th magnitude and at least ½° wide in its brightest part, with no prospects for anything but further spreading and dimming.

By comparison, that's about as wide as, and much dimmer than, the visual appearance of the Pinwheel Galaxy M33 in Triangulum. M33 is notorious for being wiped out even by light pollution in the night, never mind a bright sky before sunrise.

Not until about December 12th will the flying ghost of ISON climb far enough from the Sun to be fairly well up in a dark sky before dawn begins (and only for northern latitudes). By then the remains will be 2.5 times farther from the Sun than now, and thus 2.5 squared or 6.2 times (2 magnitudes) fainter than now. And that's assuming the dust cloud somehow manages not to dissipate any further.

Skilled astro-imagers using today's cameras and software work near-miracles in pulling faint things out of the darkness. We're looking forward to seeing what they may be able to do here. And the Hubble Space Telescope will also be taking a look around mid-December, when the comet's remains exit from Hubble's no-pointing zone around the Sun. But Hubble cannot do wide-field imagery. The hope is for some solid, inactive fragments of the former nucleus to be large enough for Hubble to detect as tiny pinpoints.

Oh well. That's comets for you.

P. S.: The consolation prize. By the way, don't forget that a beautiful comet has been hanging high in the morning sky all along! At least for binoculars and telescopes. It's Comet Lovejoy C/2013 R1, now glowing at about magnitude 4.5 or 5. It's fairly large and obvious in binoculars and is nicely placed high in the northeast before the first trace of dawn even begins. Here's our latest finder chart as Lovejoy crosses Bootes, Corona Borealis, and Hercules in December. There's no moonlight until about December 15th. See more at Lovely Comet Lovejoy. And here's a fantastic image of it taken by Michael Jäger on December 1st. Now that's what a comet ought to be!

I grew up on a small farm in Indiana. The lesson of not counting chickens until they are hatched needs to be somehow conveyed in a new saying. Don't count on a comet being spectacular until you've actually seen it?

"Silly humans... I'll teach them to make a big deal out of one of my comets before I decide what it will do!" ~ Zeus

Thanks for keeping us so well informed about the progress of the comet as it rounded the sun. The pictures from the orbiting solar observatories were spectacular. We are very fortunate to have such wonderful technology available to us at the touch of a key. I also thought the live google-ISON party was fascinating.

Just south of comet Lovejoy there's C/2012 X1 LINEAR, mag. 8, in Serpens Caput, perhaps you could add it to your map?

A small correction: M33 is the Triangulum Galaxy.

M33 has two common names - the "Triangulum Galaxy" and the "Pinwheel Galaxy," although this second name is also used by M101, as was recently pointed out in the December 2013 issue of "Sky & Telescope" magazine. See the third paragraph of "Exploring the Triangulum Galaxy" - page 34.

I like the way the clock in the video slows down considerably towards the end, like the last refrain of a song that comes smoothly to a stop on its final note. Well done, NASA/SOHO!

'Tis better to rejoice at the rarity of the documented death of a comet than to mourn the loss of a far more common astral event. Can you *imagine* the commotion the disappearance of a comet would have caused a mere 100 or so years ago? Or perhaps 1000? Stargazers would surely have thought the Sun ate it, or that disaster would befall. I'm *comforted* from watching the dissipation / dispersion / death of the comet courtesy of the solar observatory's web feed.

Actually, since ISON reached only marginal naked eye visibility during the time before perihelion, it is very unlikely the ancients would even have noticed it. 100 years ago, it would have been observed and the orbit calculated, so it would have been realized that it did not survive perihelion. Of course, without spacecraft, the show that briefly occurred and then was snuffed out would have been missed. For myself, ISON was a comet of frustration- first attempt to look was just BEFORE the big surge of November 14, so I missed it in binoculars. Second attempt was just as the surge was dying down, so although I found it easily enough near Spica, it was little more than a small fuzz ball with a trace of tail in the dawn sky. It joins Comets Kohoutek, Austin, Wilson, and PanSTARRS (maybe others I'm not thinking of) as comets predicted to be great that were a disappointment during my time as a stargazer. Only West, Hale-Bopp, and Hyakutake "made the grade" out of about 50 comets seen by this northern stargazer. Better luck next time.

Thanks, Rich! I'm glad I wasn't the only one who remembers all the hype surrounding Comet Austin. I can't remember if I actually saw it or not.

I think that whenever a pristine comet is discovered, let's just assume we have *no idea* what it's going to do, and low-ball all the estimates. If it outperforms, then Yatzee! Everyone's happy.

Thanks Alan and everybody at Sky and Telescope for your thorough, timely, and sober reporting on Comet Nevski-Novichonok (aka "ISON") since its discovery and continuing through its fitful demise. It has been a fascinating ride, and I'm looking forward to reading what scientists discover from ISON. I'm glad I was able to see ISON through binoculars three times before perihelion, thanks to the accurate charts on skyandtelescope.com. I do feel sorry for folks who were convinced to buy their first telescope or decent pair of binoculars to observe ISON, and I hope they will find other things to look at -- perhaps Comet Lovejoy C/2013 R1, which is truly lovely, and a joy to behold.

Lots of debris ... anybody know if we are ever going to cross that orbit?

SOHO is a joint ESA/NASA project. It was built in Europe, launched by NASA on an Atlas II, and day-to-day operations is done at Goddard Space Flight Center in Maryland. It now is in the 18th year of a 2 year mission. Great engineering! Many S&T readers probably already know this, but the flickering pixels in the SOHO images are due to particles (mostly protons, i think) impacting the camera detector from the solar wind.

Thanks S&T for the excellent, extended coverage of this mercurial celestial visitor. Even the fact that ISON was apparently eaten by the ferocious "climate" next to the Sun, it still made for a fascinating story.

No chance of a meteor stream coming from the demise of ISON. Its orbital track was highly inclined to the ecliptic, and did not come anywhere near earth's habitual path around the Sun.