The mornings around April 22nd and 23rd bring the annual, and highly variable, Lyrid meteor shower. Outbursts of Lyrids have been seen since at least 687 B.C. (when Chinese records say "stars dropped down like rain"), but in most years meteor watchers count 10 to 20 visible per hour under ideal conditions. At intervals of about 12 years the shower occasionally performs more than 10 times as well. But the 12-year cycle itself is very spotty.

Why does it happen at all? The orbital periods of the meteoroids and their source, Comet 1861/G1 Thatcher, are much longer: about 400 years. Complex perturbations by Jupiter seem to be acting on separate, narrow substreams within the overall Lyrid meteoroid stream. Each substream was shed by Comet Thatcher during a past return to the inner solar system. 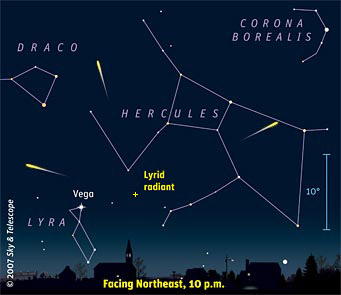 According to this model the next Lyrid outburst won't come until 2040. But no one knows for sure what's going on, and if past outbursts were missed (they tend to last only about 6 hours) the model may be incorrect. So observers are needed to keep the Lyrids under watch.

This year the light of the waning gibbous Moon will interfere, but at least you can determine whether or not an outburst is in progress at the times you're looking. Watch in the hours before dawn, when the shower's radiant (near Vega) is high in the sky.