much of Antarctica and Patagonia. But in addition, Walker Vaning

for observers in the whole hemisphere of Earth facing Pluto, which

includes all of South and Central America, most of the Atlantic Ocean

(including the Canary Islands), the Caribbean Sea, eastern Mexico,

eastern USA, and eastern Canada. The star is at right ascension

hours from the time of Pluto's closest approach to the star, so that

observers in western Europe and southern Africa might try to record

before sunrise, and those in western North America have a chance as

soon as Pluto rises high enough for effective observation. Since the

particles are small, there is a substantial wavelength dependence on

the visibility; Vaning recommends observing in the blue, at as short a

wavelength as possible. Vaning claims that he finds as many as 30

rings in the Kuiper Airborne Observatory blue observations of the 1988

occultation, but that the ring occultations are very shallow or absent

in visual and red wavelengths. 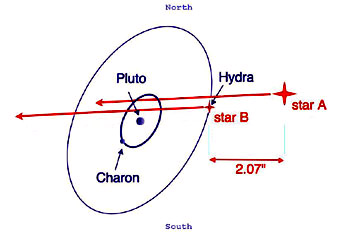 The star involved with Pluto on May 11-12 is actually double, and Pluto's outer moon, Hydra, could occult the B component. This plot applies to the event as seen from the Gibraltar area.

LATE UPDATE: It turns out that the star to be occulted by the
Pluto system tonight is binary. The main star (A) is a bit
brighter than Pluto and the companion star (B) is perhaps a little fainter
than Pluto. The B star is expected to be occulted by Hydra, the small outer
satellite of Pluto, within a few minutes of 3:14 UT May 12th. More details
are given by Bruno Sicardy here. Jean Lecacheux in France writes,
"The duration in case of a central event could be between 2 and 7 seconds.
The nominal path of the Hydra shadow is predicted above northern Africa,
Gibraltar, and the Azores, but taking into account the large uncertainty
and the morning twilight, the event has to be monitored southside from
the Canaries, and northside from continental Spain and Portugal, the
Baleares and south of France. This will be a very difficult observation, as
the faint occulted star will be jammed between two brighter bodies, the main
star A to the west and Pluto slowly approaching (at 2.85" per hour) from the
east."

Zealand (the latter especially considering the north shift from

Pluto's ephemeris that may have caused the north shift during the

as seen from Australia, Indonesia, Philippines, Japan, Asia, and

actually pass "between the shadows" of Pluto and Charon, with no

occultation by either object visible from Earth's surface. But

occultations by possible Plutonian rings might be observed from the

southern China to the Ural Mountains), the Horn of Africa, western

Australia, part of Antarctica, and the Indian Ocean. The star's UCAC2

Note that these observations will be beyond the range of most

for weak fluctuations due to rings.

Independent predictions and some graphics for these occultations,

based on astrometric observations at Lowell Observatory, can be found

at this MIT website. It also lists one more event (May 14th), but in that case the star is too faint for the confirmation of
Plutonian rings.

For occultations of stars by small solar-system bodies, we have

are available as well) at these URLs:

Once you complete one of these forms, please send it to IOTA's e-mail

Additional resources for reporting your observations are available at

the website of the North American Asteroid Occultation Program:

Please check the online version of this AstroAlert on Sky &

Any major updates will be announced via subsequent AstroAlert