The converted homes that housed Sky & Telescope's editorial offices for six decades bit the dust yesterday, literally, as demolition crews tore them down.

In 1974, when I joined the staff of S&T, the magazine's official address was "49-50-51 Bay State Road, Cambridge, MA 02138." As I readied to move east from California and pondered my future at this icon of amateur astronomy, I wondered a lot about those strange street numbers. "What a marvelous corporate edifice it must be!" I mused, imagining a trio of sleek glass-and-steel towers connected by walkways suspended over the bustling urban streets below. 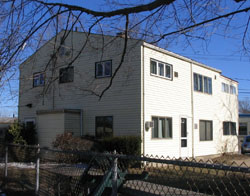 The staff of Sky & Telescope occupied this house in Cambridge, Massachusetts, from 1958 to 2006.

Boy, was I wrong! To my shock and disappointment, Sky & Telescope's offices were in a bunch of drab houses tucked along a gritty sidestreet right next to a former landfill. Oh, joy! The basement smelled of the landfill.

I never would have guessed at the time that I'd spend more than 30 years in those confines — writing, editing, fussing, and toiling for the magazine's dedicated worldwide readership. Charlie Federer, S&T's founder, had purchased the properties beginning in the 1950s for his expanding enterprise. Those converted homes weren't fancy — the carpeting was threadbare and the windows sometimes leaked — but for six decades Bay State Road was the hub of the amateur-astronomy universe. 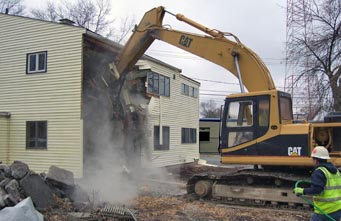 A work crew demolishes the house that once served as Sky & Telescope's editorial offices.

Yesterday, as current and former staffers looked on, a demolition crew first leveled the house at 48 Bay State Road ("50 BSR," which had been Federer's home before he moved out and staff moved in), and then the one next door at the current 50 BSR address. The houses had been vacant for several years, ever since the magazine's offices moved in 2006 to better quarters on nearby Sherman Street. A clutch of condos will go up in their place.

Six decades of collective memories came flooding back, and it's funny which moments stand out in my mind. I vividly recall getting hammered by the incredible Blizzard of '78, which brought our part of New England to a complete standstill for more than a week. The storm's timing couldn't have been worse — it was "ship week" for the forthcoming issue — so I dutifully hiked several miles to the office each day through the drifts, sometimes hitchhiking with emergency crews.

A few years later managing editor Bill Shawcross decided we could save money by doing all the "pre-press" work ourselves, and not long thereafter a moving crew hoisted a big camera, giant drafting tables, and other equipment through an enormous hole in 48 BSR that they'd opened up in its side. 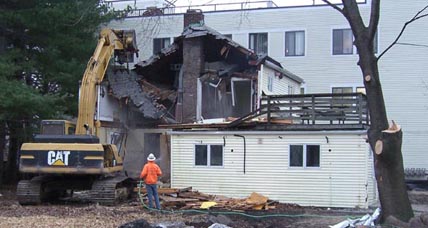 A demolition team takes down one of two houses that served as Sky & Telescope's headquarters. The author's one-time office went with the first bite.

Editor-in-chief Robert Naeye had the first of his three Sky & Telescope stints as an intern in the summer of 1991, sharing an office in 50 BSR with fellow intern Kari Nyren. "I remember being left behind with Kari as the entire editorial staff headed to Hawaii or Mexico to watch a total solar eclipse," he recalls. "The two of us handled all the phone calls from the media, taped the weekly Skyline recording in the basement, and basically had an entire building largely to ourselves."

Alan MacRobert started in 48 BSR "when I was a kid bicycling in every day. There was a maple sapling in the front yard outside my window. I watched it grow into a thick, full-grown tree, and now it's gone too. My job has outlived a full-grown tree. That's pretty unusual these days."

For a time, S&T's staff totaled more than 50, enough to fill both of those houses and a larger building across the street that's now the home of the American Association of Variable Star Observers. We editors were in one house, the art and design staff in the other. On winter days snowballs would sometimes rain down from one building onto the other during "friendly feuds". Design director Pat Coppola recalls a paper cat she placed in one of the windows so birds wouldn't dive bomb into it. The cat was still there when the building came tumbling down.

Between the two houses was a small grassy area that provided a pleasant place to take a break, eat lunch, or have a staff barbecue. My longtime colleague Roger Sinnott looked on yesterday as a backhoe ripped out a solitary Bartlett pear tree in the yard that provided us with quick snacks and make-do lunches for many summers.

We're often reminded that "a house is not a home," but I loved those old buildings through and through. They were the physical foundation on which Sky & Telescope was built for near a half century (1957–2006), and it was sad to see them come down.

Yep, it is sad when they take away history. Same as the
area I grew up in and started astronomy in 1960.....the old house still there but others have gone to greed landlords.

Unfortunately, events such as this can become a reality. Being a loyal Sky & Telescope subscriber since 1971, it is the 49-50-51 Bay Street address that I have indelibly stamped in my mind. May the memories of the site be happy and colorful. In the future, perhaps, it might be possible to have a landmark plaque at the site as a remembrance. And thus, time marches forward.

I used to wonder about that address, as well. I always figured that something as special as S&T required a special address.

It's a shame to see the old buildings go down, but hey, maybe the future will be better.

Yes, I know the feeling of demolished work buildings very well. In 1988 I was laid off from my job of 19 years and had to move the family to Mishawaka, Indiana where I took a job at Uniroyal Plastics. The building was a full city block in overall size and four stories high. Uniroyal was NOT one of my favorite places to work and I was laid off from that job, along with 150 others only 11 months later. Still, when I learned by accident that the entire block sized building was to be demolished on a Saturday, I can honestly say I was sad to see it go. By that time we had moved back to Ohio and settled into a much better job. But the demolition was still not a happy event.

I also remember well the Blizzard of 1978, although I had a better time of it than you. I was farther south, in New Haven, CT, attending Yale, where we got "only" 18" of snow. (Hartford, only about 40 miles north, got more like 30".) Quite a climate shock for this native Texan who spent prior college years at the U. of Arizona in Tucson. We also had National Guard assistance, and many truckloads of snow were transported down and dumped into the harbor.

I recall being given a personal "tour" of the whole Sky & Telescope complex by the late George Lovi; we were close friends. I recall that Sky & Tel's headquarters could be found down the block, in a way, from a large appliance store called "Sozio," or something like that.

Touring the home of Sky & Tel was in a way, a "religious" experience, much like what folks might feel when visiting Palomar.

The spirit that permeated every space in those buildings, be it office space, shipping, or something else, is what made the magazine great. It is that spirit of dedication to "the cause" that carries on, even if the wood frames, the shingles, and the threadbare carpets will disappear.

I remember the day when my Dad who worked at the Post Office in our little town in Waukon, IA, brought home my first issue of S&T. It was April 7th, 1966, and I was the happiest 11 year old in town. While waiting for the the first magazine to arrive, I searched library maps to see where 49-50-51 Bay State Road was in Cambridge, MA. Seemed so far away and I too imagined a fantastic place that could create a magazine about the universe so far away.

Nobody else was into astronomy as I was, but it inspired me to build my first 6" f/8 Newtonian reflector telescope in the basement of my grandfather. I would set my telescope up in the corn field a block away from my house and watch the Stars/Moon/Planets by myself and draw what I saw on a spiral notebook. Still have that special journal, the telescope, and all my old S&T magazines.