The first thing I saw when I entered the University of Arizona office of Tom Gehrels last April was his racing bicycle. Fitting enough for a Dutchman, Gehrels always rode it from his Tucson home to the Lunar and Planetary Laboratory and back again, even at age 86. 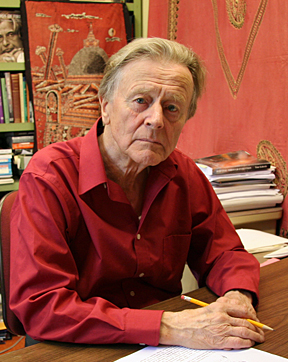 Tom Gehrels joined the University of Arizona in 1961 and became a leading expert on asteroids.

The second thing I saw were Indian tapestries and Buddhist artifacts, giving the office a distinct Eastern look and feel. As a lifetime Fellow of the Physical Research Laboratory in Ahmedabad, Gehrels spent a few months each year lecturing in his beloved India. And, yes, he practiced yoga every day, presumably right up to his peaceful death on July 11th.

The third thing I saw was a frail man with light-blue, watery eyes and a friendly smile. When I asked him how he was doing, he replied in Dutch, "Het gaat heel goed!" — "I'm doing very well!" In fact, he said, his health appeared to be improving over the years.

Born February 21, 1925, Gehrels was a unique and wonderful person. Raised in the Dutch Bible-Belt community, he started to wonder about truth, reality, and the existence of God at a very early age. He was only a teenager when he became active in the Dutch Resistance during World War II. Gehrels fled to England, where he carried out secret operations for the Dutch government. One of his brothers was later killed at a Nazi concentration camp.

After the war, Gehrels studied astronomy at Leiden University. In the late 1940s, on a shoestring budget, he hitchhiked from New York to California, where he met famous astronomer Walter Baade at Palomar Observatory. Soon he would make the United States his home. 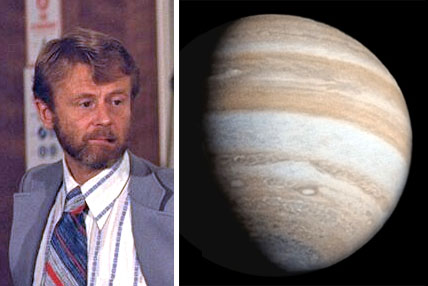 Tom Gehrels pauses during a 1974 press conference concerning results from Pioneer 11. The spacecraft and its twin, Pioneer 10, returned the first close-up views of Jupiter during their flybys.

Gehrels worked with fellow Dutchman Gerard Kuiper, first at the Yerkes Observatory, and later in Tucson, where he would remain for the rest of his life. A pioneer in balloon-borne observations and skilled in polarimetry and photometry, he served as principal investigator for the "cameras" (actually scanning photopolarimeters) on the twin Pioneer spacecraft that obtained the first close-ups of Jupiter and Saturn.

As a young Dutch amateur astronomer in the 1970s, I felt nothing less than awe for this man, who in 1960 had carried out the now-famous Palomar-Leiden asteroid survey with Kees van Houten and Ingrid van Houten-Groeneveld. Together they turned up a whopping 4,177 new asteroids. (It's one of the reasons why so many Dutch people are immortalized in the solar system, by having an asteroid named after them.)

Domes for the Spacewatch Project's 1.8-m and 0.9-m telescopes on Kitt Peak, Arizona.

In 1983, together with his Arizona colleague Bob McMillan, Gehrels founded the Spacewatch Project, which still scans the night sky over Kitt Peak National Observatory for threatening near-Earth objects. I remember interviewing Gehrels about this work in the early 1990s. "Suppose an asteroid would be discovered that would hit the Earth," I offered. "What would you do?" His eyes began to twinkle as he replied, "Go out there and have a look, of course!"

On the shelf behind his Tucson desk is perhaps Gehrels' most enduring legacy: the 30-or-so massive volumes of the Space Science Series.

Produced by the University of Arizona Press, these tomes cover almost every topic in our solar system (or in those elsewhere) and represent a kind of collective bible to planetary astronomers. For his tireless involvement as the series' general editor, in 2007 the AAS's Division for Planetary Sciences honored him with the Harold Masursky Award for outstanding service to planetary science and exploration. 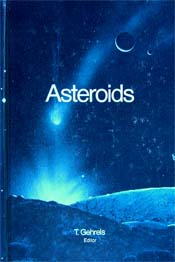 Published in 1979, Asteroids, edited by Tom Gehrels, was the first volume in the University of Arizona's long-running Space Science Series.

My brief visit in April came just two weeks after a luncheon at which Gehrels was honored for his remarkable half century of service to the University of Arizona. But we spoke little of that, or killer asteroids, or the Space Science Series.

Instead, we mainly discussed his latest unconventional ideas about cosmology. Inspired by his University of Chicago teacher Subrahmanyan Chandrasekhar, Gehrels explored an almost mystical equation that appears to numerically connect quantum physics, gravity, and relativity. In his final monograph, Can We Do Without the Big Bang?, he describes his own view of Truth and Reality — a hard-to-grasp, pseudoscientific set of ideas concerning an "interuniversal medium", dark energy as a consequence of "old photons", and an eternal multiverse without need for a Big Bang.

"I've been called a crackpot by cosmologists, and I can't blame them," he said, again with those heavenly, twinkling eyes and that loving smile. "They've built their careers on a wrong idea, and I am an outsider. But I don't care. When I started Spacewatch in the 1980s, the same thing happened: no one would take me seriously."

As I left the small office — which probably would have smelled of incense if Gehrels had been allowed to burn it — I shook his bony hand. Suddenly he frowned and looked wounded, recalling the compulsory church visits in the small Dutch village of Halfweg, where he was raised. But then his face brightened again as he said: "Have you been there recently? They've torn it down! It's torn down!"

In his search for understanding, Tom Gehrels encountered the frailty of humanity — constantly threatened by cosmic impacts — and lost track when he tried to answer the biggest questions science can ask. He was a remarkable fellow, a creative scientist infused with a spirited personality. I feel privileged to have met him less than three months before he died.

Asteroid 10986 Govert, named after contributor Govert Schilling, was discovered as part of the Palomar-Leiden Survey.

How unfortunate that Tom passed away just five days prior to the Dawn spacecraft entering orbit around the asteroid 4 Vesta. Perhaps one of the most prominent features on Vesta that will soon be discovered by Dawn could be named after Gehrels in recognition of his enormous contributions to asteroid science.

The link to 'Can We Do Without the Big Bang?' returns a response from the U of A bookstore that 'the product is unavailable'. How sad if the U of A is trying to distance itself from Mr. Gehrels' unconventional views just days after his passing.

If the article IS being supressed, I'd say that's a fine reason to read it. If anyone can forward a copy to tedahunt[at]yahoo[dot]com, or tell us all how to find it, I'm sure many S&T readers (besides me) would be appreciative.

The S&T URL to Tom's monograph was incomplete. The U of A bookstore URL is lengthy, so this tiny URL will get you there:

It is indeed sad news to read of Dr. Gehrels passing. I heartily second the idea that same prominent feature on Vesta be named in his honor. He essentially invented the modern techniques used in hunting for NEOs, among his other contributions. I do find it odd, that he decided to dive into a field, cosmology, that was entirely new to him.

Tom Gehrels is the latest in a long sad list of astro-luminaries that the world has lost in recent months, that include Brian Marsden and Alan Sandage (amongst others).

When I started working at the Carter National Observatory of NZ in the late 1980's and fulltime in the 1990's I was soon made aware of Tom's huge contributions to asteroidal and astrometric science... the latter being especially appreciated here in NZ, by those involved in Occultation work.

Tom comes from a long line of Dutch born astro-luminaries that go back several proud centuries to Christian Huygens, but include in more recent decades:- Jan Oort, Van Der Hulst, and Gerrard Kuiper. Huygens famous quotation "I set myself to work" rings loudly in my ears, when I fondly recall Tom Gehrels.

Tom has left huge shoes to fill, and certainly raised the scientific bar for us lesser mortals. Thank you Tom for a passionate and life-long service to the Science. One of the true greats... sadly missed.

I had a class on planetary science at University of Arizona in 1997 Taught by this fine man. I was also privilaged enough to have been to the space watch telescope on Kitt Peak with him as well on one occasion. I was able to talk to him one on one on several occasions as a result of taking his class. This was a real scientist. Not afraid to ask the hard greasy dirty questions that flew in the face of the status quo. Besides, how are you supposed to discover anything new if you are not willing to look where others are not. His class was like that and he was fantastic to converse with. You could get into the so called psudoscience realm but then see if there was anything to it. Many of these ideas cannot currently be proven but more importantly they cannot be disproven and the little bit that I did know him I believe he followed that. I have taken a different career path since then and did not have the opportunity to speak with him since. He will be missed...