All major star parties have similarities, but they're also surprisingly different. So I didn't really know what to expect when I attended the Riverside Telescope Maker's Conference (RTMC) for the first time this year. 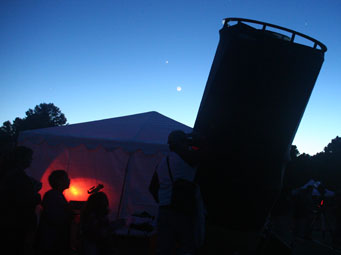 People queue to look through a 42-inch telescope at RTMC 2010.

I enjoyed the experience a lot more than I expected. I think I was somewhat put off by two facts. First, the venue is less than 100 miles as the crow flies from downtown Los Angeles and on the edge of Big Bear City, a major resort town. Second, up to this year, the event was always held on Memorial Day weekend, regardless of the phase of the Moon. Those two facts combined made me think that the event is more about looking at telescopes than looking through them. All serious observing-oriented star parties are held when the Moon won't be lighting up the sky. Besides, even at new Moon, how dark could the skies be so close to L.A.?

I wouldn't have attended RTMC this year if the event had been held on Memorial Day weekend, coinciding with full Moon — and also a time when I'm always busy with family obligations. But for the first time ever, RTMC 2010 was shifted a couple of weeks early to coincide with new Moon. That allowed me to do some excellent deep-sky observing and assess the conditions. 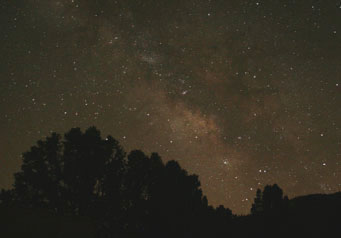 Scorpius and Sagittarius rise in the southeast at RTMC.

Some people were grumbling about the light pollution, but by East Coast standards, they're simply spoiled. Yes, the entire western sky is lit up by Big Bear City and greater Los Angeles. But the sky's not bad at all to the east, as this picture of the Milky Way rising clearly shows. (Click here if the image doesn't show.) And directly overhead, it's not far from pristine. I saw some great views of the dust lane in NGC 4565 and the spiral arms of M51. Granted, that's partly because I was looking through huge scopes — another subject for another article. But if the skies were really as bad as some people were claiming, all the aperture in the world wouldn't show galaxy features as well as I saw them.

I'd put the site more or less on par with the one for Stellafane, the East Coast's oldest star party. The worst part of the sky at RTMC is much brighter than anything at Stellafane, but the darkest horizons are darker, and overhead both sites are much of a piece. For the record, the Light-Pollution Atlas places both sites on the green/yellow boundary, as you can see by examining the Clear Sky Charts' Stellafane Light Pollution Map and RTMC Light Pollution Map. Neither one is a great site by any stretch of the imaginiation, but they're both adequate for serious deep-sky observing — or for viewing eye candy through big telescopes.

Tony, you need to get your eye out of the eyepiece and see the bigger picture of these star parties. You seem to miss the point of both RTMC and Stellafane in your blog. Both were and still are more about amateur telescope making, not primo observing. Your comments about the sky pollution and date chosen around memorial day weekend don't matter as much as the opportunity to show and compare what ATMs are building or commercial vendors are developing and selling (at RTMC at least). The weather and sky at Stellafane only by luck is good for testing mirrors and observing. You mentioned that you wouldn't have attended RTMC if it had been held on the traditional Memorial Day weekend and full moon.

I was disappointed by the move because in mid-May kids are still in school and that kills making it a family trip to get kids into 'my hobby' of astronomy and ATM. This is already a problem with the Texas Star Party and Okie-Tex. Memorial Day was always close o end of school year, so why RTMC has to make it more difficult was beyond me. Fortunately they're changing back to MDW. Getting younger generations into ATM and Astronomy has been a topic of much discussion in graying astronomy clubs. Making star party dates school calendar friendly is one less barrier in the control of astronomy clubs and societies.