Astronomers around the world are watching as a mysterious object heads for a close pass around the Milky Way's black hole.

The gaseous snack inbound for our galaxy’s supermassive black hole might be starting to swing around the beast, like a waitress on roller skates leading with her hors d’oeuvres tray. Called G2, the mystery object was discovered in 2011 to be dive-bombing toward the black hole. It appears to have about 3 Earth masses in gas, but whether it’s merely a cloud or a young enshrouded star is fiercely debated. 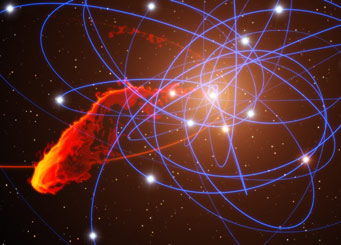 In this simulated view of the gas cloud's breakup, the cloud (red and yellow) has already passed through its 2013 closest approach and broken up, with pieces heading into the unseen black hole in the middle. The stars orbiting the black hole are shown along blue orbital lines. Everything's positioned as expected for 2021.

Astronomers had forecast that G2’s closest approach to the black hole, a point in its orbit called peribothron (from the Greek bothros, a type of sacrificial pit), would be around September 2013. This spring, Kim Phifer and Andrea Ghez (both University of California, Los Angeles) and their colleagues pushed that estimate back to March 2014 after analyzing Keck observations spanning June 2006 through August 2012.

Now Stefan Gillessen (Max Planck Institute for Extraterrestrial Physics, Germany) and his colleagues think they’ve spotted a turnaround. Observations done this April with the Very Large Telescope in Chile show a shift in part of G2’s emission: instead of being entirely redshifted — which means the emitting object is moving en masse away from us — a fraction of the diffuse gas is now blueshifted. That implies that the front-most bit of gas has swung around the black hole and begun moving back toward us along our line of sight.

That doesn’t mean the estimate for peribothron is off, Ghez says. It’s hard to talk about an exact date because while G2’s compact “head” is roughly 100 Earth-Sun distances wide, the diffuse part is stretched across 10 times that distance. Gillessen’s team estimates that only 7% of the cloud had swung around the black hole when they observed in April. The main chunk of gas is therefore still en route.

Astronomers will have to wait until G2’s head swings by the black hole before they know for sure what it is. If it’s just a cloud, the object should be torn apart; if a star hides inside, it should survive. Until then, researchers are at loggerheads.

Whatever G2 is, observers hope that it might nudge some material into the black hole’s maw or even drop some crumbs itself. If so, it could encourage the beast to take a break from its diet and swallow a big meal, possibly triggering a fanfare of flares and activity that could last several years. Teams across the world already have more than three dozen observing proposals approved to follow G2 in as many wavelengths as possible, making G2 one of the most intensive observing campaigns in recent memory.

Can you help me find RA 10h 15m 45sxDEC 56 31' 5". I would like to see where in is in relation to the Big Dipper so I can place it on the ceiling for my grand kids in glow in the dark stars. I bought each of he a star for Christmas. Thanks so much. This one I can't find.

Becky, you just pick a couple of bright stars, give them whatever name you please and present them to your grand children.

You could call one of them "They conned me" and the other one "The money I was cheated of".

Nobody has the right to sell a star - you can't sell what you don't own.

Becky -- I think it's very kind of you to give your grandchildren a view of the night sky in their bedroom. (As Jstahle said, buying stars is a scam, and I hope you won't do that again.) Your star is located west and slightly south of the big dipper. Start at the bottom corner of the dipper below the corner where the handle joins the bowl, draw a line to the bottom corner of the bowl opposite the handle, continue that line for about the same distance and then drop south about one quarter of the distance. There's your star, at least close enough for sticking stars on the ceiling. If you're able to find upsilon ursae majoris and phi ursae majoris, your star is the third corner of an equilateral triangle with those two stars. I hope you'll also be able to take the grandkids out to see the real night sky, too.

this was reported here also http://newsmoves.com/astronomers-may-soon-be-able-to-see-black-holes/ but im still confused! how can you see something that doest emit ligt? sorry for the noob question

Yes indeed, the estimate for the cloud's mass is only a few Earth masses! But the cloud could be hiding something more massive inside it because even though the cloud itself is not massive, it's reasonably big: the central part is stretched across about 100 a.u., and the diffuse bits are stretched even farther. That's plenty of space in which to hide a young star, particularly if the star hasn't started fusing hydrogen yet (as one example). Steve, G2 emits in infrared, which is how astronomers are able to observe it. The article you linked to is about the Event Horizon Telescope (which I wrote about in our February 2012 issue and in http://skyandtelescope.org/news/home/Astronomers-Approach-Black-Hole-171534261.html), which is a different (but AWESOME) project. G2 could give us information about the black hole because it will be passing through the strong-gravity region the black hole creates; the EHT will give us different information by detecting the silhouette the black hole creates by bending light around itself. By studying that silhouette's appearance, astronomers will be able to say whether gravity behaves as Einstein's theory says it does.