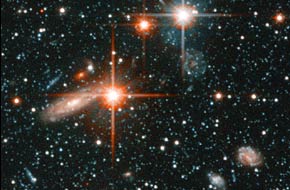 Does all this have a purpose?

One of the many magazines we receive at the office is American Scientist. I like going through it because it has interesting articles, sometimes about nerdy subjects that I otherwise wouldn't have considered. A recent issue had an article analyzing the (mis)spellings of Viagra e-mail spam. Plus, the magazine has sciency cartoons.

In flipping through the September-October issue earlier in the week, I found an intriguing advertisement from the John Templeton Foundation. The two-page ad asks the question: "Does the Universe have a Purpose?" and includes the responses from seven scientists, including several astronomers. Interesting reading! The ad has just parts of their responses; the full essays — and the responses from four additional people — went online today at www.templeton.org/purpose.

My view? I on board with Lawrence Krauss. I don't think the universe necessarily has a purpose. It could, but I'm content that it does not. Stuff happens — there doesn't need to be a meaning behind it. Billions of years is a long time to have matter and energy simmer.

I hadn't looked at American Scientist before and found it to be a very interesting site.

Although the question of purpose is interesting, it is one of those questions that we can't currently answer. It can be fun to think about and discuss.

I actually found the article "Modern Cosmology: Science or Folktale?" by Michael J. Disney to be very good. I think we all know that the study of cosmology is handicapped by the very limited amount of data available, but this article expresses this in a concise and understandable way.

I rarely agree with your politics, but on this subject, I am with you. The universe needs no purpose. *WE* need it to have a purpose because *WE* like to believe *WE* are significant. Without a purpose, *WE* have no purpose. Or so *WE* want to believe. Notice the ego-centric view point.

So I am okay with everyone else saying there must be a purpose or this is all for naught. Even though you and I know, there is no purpose needed. *WE* just 'are'. And that should be good enough? Oui?