Observations of two solar twins — one old and one young — confirm that the Sun has probably destroyed its lithium over time. 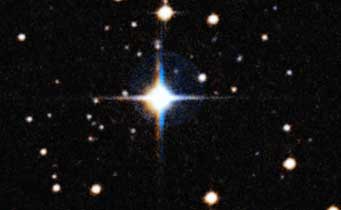 Two exposures combine to create this image of HIP 102152, located 250 light-years from Earth in the constellation of Capricornus. HIP 102152 is a close solar twin â€” except it's nearly four billion years older.

I’ve blogged repeatedly here about the universe’s missing lithium. But lithium is also a troublemaker in the solar system. Based on primitive meteorites that record the makeup of the nebula from which the solar system formed, the Sun seems to have destroyed more than 99% of its initial lithium.

This missing lithium is a different problem than that of cosmic lithium. The old stars that are used to estimate the universe’s primordial lithium levels still have something like 150 times more of the isotope lithium-7 than the Sun does.

Astronomers have mused over how the Sun lost so much lithium for a while. Studies of other stars have suggested that the Sun might have destroyed its lithium as it grew older. A new study in the September 10th issue of Astrophysical Journal Letters supports that idea.

TalaWanda Monroe (University of São Paolo, Brazil) and colleagues used the UVES spectrograph on the Very Large Telescope to study the chemical makeup of two Sun-like stars, HIP 102152 (in Capricornus) and 18 Sco. They found that HIP 102152 is perhaps the closest solar twin yet studied — except for two things: its age and its lithium level.

HIP 102152 is 8.2 billion years old, 3.6 billion years older than the Sun and about to transition to its golden years, when it stops fusing hydrogen in its core. Its lithium level is really low, about one-fourth the Sun’s.

Conversely, 18 Sco is only 2.9 billion years old and has nearly four times more lithium than the Sun does.

Given the close agreement of the level of other elements in the three stars, age seems to be a key factor in this development. “We’re pretty sure that lithium is somehow destroyed as a star ages,” Monroe says. The team is currently looking at more than a dozen other solar twins of different ages to see whether the correlation holds up.

Lithium is a fragile element, destroyed at temperatures above about 2.5 million Kelvin. This temperature is much lower than that required to destroy other elements found in the Sun, such as carbon and oxygen. But it’s also more than 300 times hotter than the Sun’s surface. The lithium would need to sink deep into the Sun to reach such temperatures.

The problem is, the Ferris-wheel-like motion that carries material from the interior to the surface and back again shouldn’t drag lithium deep enough into the star to hit these temperatures, at least according to standard solar models. But this so-called convective zone doesn’t exist in isolation: it’s above the hot radiative core, which has different properties than the overlying convective layer. Astronomers have suggested various mechanisms to encourage mixing between these two regions and heat up the bottom of the convective zone, but the right explanation is hard to pin down. Given the new observations, the heating definitely looks like it’s happening.

This destruction — however it happens — probably has no bearing on the cosmic lithium problem, says Christopher Howk (University of Notre Dame): the stars used to measure the universe’s lithium levels shouldn’t have outer convective zones.

And while the authors raise the question of whether the low, solar-like levels of lithium and rocky-body elements in HIP 102152 suggest it might have terrestrial planets, there’s debate about whether that connection exists.

Watch the video the ESO put together to show how a Sun-like star will develop with age (from presolar nebula on left to red giant on right), with markers showing where the Sun and the other two stars lie: