The latest skirmish between telescope manufacturers has ended peacefully, with both sides declaring victory. In 2006 Star Instruments and RC Optical Systems sued Meade Instruments and some of its dealers for false advertising. Earlier this month, all parties agreed to an out-of-court settlement. 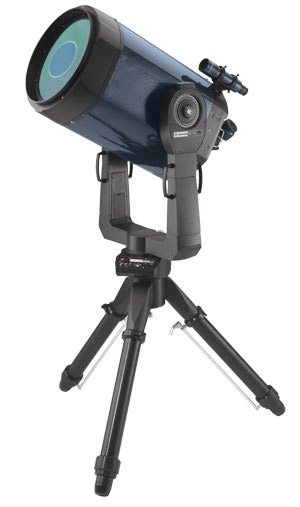 The 14-inch RCX400 telescope from Meade Instruments, shown on its field tripod. Originally marketed as having an "advanced Ritchey-Chrétien" design, it will be rebadged as the LX400-ACF, for "advanced coma-free" catadioptric.

At issue was Meade's claim that its RCX400 and LX200R catadioptric telescopes feature an "advanced Ritchey-Chrétien" design. RC telescopes are the instruments of choice for many of today's elite astrophotographers, because they provide a wide, coma-free field that covers large CCD chips — and before those, photographic films or plates — with round star images. (Coma makes off-axis star images look like little comets rather than dots; it's an unavoidable aberration in some types of telescopes.) The design was developed by George W. Ritchey (1864–1945) and Henri Chrétien (1879–1956) in the early 20th century, and it remains the gold standard for optical quality nearly 100 years later. Most of the giant reflectors peering skyward from high mountaintops incorporate RC optics, as does the Hubble Space Telescope.

Ritchey and Chrétien achieved their superior optical performance using concave primary and convex secondary mirrors with hyperbolic curves, which are much more difficult, time-consuming, and costly to figure than the spheres and parabolas used in many simpler types of telescopes. But some of the world's top astrophotographers won't settle for anything less. Thus Star Instruments, which produces RC mirror sets, and RC Optical Systems (RCOS), which builds telescopes around them, have done brisk business for many years selling premium RC equipment to discriminating sky shooters.

Then, in 2005-06, Meade unveiled its RCX400 and LX200R telescopes, which the company advertised as delivering RC performance at unheard-of low prices. Meade achieved its cost savings by using a third optical element: a lens figured so that the combination of it and an easily manufactured spherical primary mirror looks like a hyperboloid to the smaller secondary mirror. Meade's promotional literature, echoed on many of its dealers' websites, described the design as "advanced" because the extra lens corrects the astigmatism inherent (though minuscule) in classical RC telescopes. What Meade didn't say was that the lens also introduces a tiny amount of chromatic aberration (false color) and blocks light at the shortest (bluest) visible wavelengths. Nor did Meade acknowledge that mirror-lens designs similar to those used in the RCX400 and LX200R were introduced as early as the 1960s, the best-known being the aplanatic Schmidt-Cassegrain.

Star and RCOS quickly filed a lawsuit, alleging that Meade was trying to capitalize on the Ritchey-Chrétien reputation with telescopes that aren't, in fact, RCs. I wrote an editorial about this in the January 2007 issue of Sky & Telescope, in which I asked what's more important, what a telescope is called or how it performs. Readers responded with a hail of letters angrily taking sides (mostly against Meade), some of which we published in our March 2007 issue.

After more than a year of legal wrangling, during which (for unrelated reasons) Meade temporarily halted production of all RCX400s and some LX200Rs while relocating its manufacturing facilities, the companies finally agreed to a truce.

According to a statement from Meade, "As part of the settlement agreement, plaintiffs dropped their claim for a substantial monetary recovery. In exchange, Meade has agreed to pay a de minimis amount to the plaintiffs and to rename their ground-breaking RCX product, not using any initials that might suggest Ritchey-Chrétien in the name. At the same time, Meade will be under no restrictions in referencing the Ritchey-Chrétien-like benefits of the RCX product, such as the elimination of coma, which many people feel is the single largest benefit of the Ritchey-Chrétien optical system." In a letter to Meade dealers, Robert Davis, the company's senior vice-president of sales, wrote that the RCX400 and LX200R product lines will be renamed LX400-ACF and LX200-ACF, respectively. ACF stands for "advanced coma-free."

"Truth in advertising prevailed in this case," said Paul Jones, owner of Star Instruments, in a statement sent to Sky & Telescope and published on the RCOS website. The settlement will "preserve the integrity of the optical design," he added, ensuring that the only telescopes that can lay claim to the sought-after RC label have "a two-mirror optical system utilizing a concave hyperbolic primary mirror and a convex hyperbolic secondary mirror without a lens."

Thanks Rick for the news and clarification. With this behind us I am now hoping that a company will come forward with a workable product for optical interferometry at the amateur scale. I would love to put two 14" telescopes together to achieve the long-sought "1-meter family scope". Would this be possible with R-C or ACF designs?

It would cost less to buy a 1-meter telescope than to buy (or build) the delay line, beam combiner, and other instrumentation you'd need to do optical interferometry with two 14-inch telescopes. Combining the light from separate telescopes makes economic and scientific sense only when there's no other way to get as big a telescope as you need for a particular application.

In principle, you could do optical interferometry using any telescope design. Keep in mind, though, that you can't look through an interferometer, so unless your family enjoys watching interference patterns, two 14-inch reflectors 1 meter apart wouldn't make much of a "family scope"!

This agreement satisfies me. When I visited Mt. Wilson in 2006. it was explained that the 60" mechanicals were designed by Mr. (Ritchey or Chretien, I don't remember which). I had bought a 1/2 night observing time and later, as I climbed the observing platform and looked through, touched, and otherwise interacted with this amazing instrument, I felt a certain awe that I was being allowed to join into the history of it.

When Meade made their false advertising claims I felt that it was irreverent and cheapened my astronomy hobby. It is all about the money isn't it? Feinberg didn't mind because he is a money man too. Just look at all the shameless commercialism.