The Kepler mission has discovered an exoplanet smaller than Mercury orbiting a roughly Sun-like star. 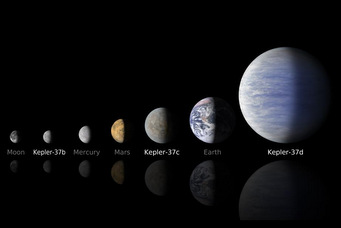 An international team of astronomers analyzing data from the Kepler satellite may have just stumbled upon the tip of the tiny planet iceberg. Thomas Barclay (NASA/Ames Research Center) and his colleagues announced their results in the February 20th issue of Nature, describing their detection of Kepler-37b, the smallest planet ever discovered around a normal (main-sequence) star.

The newly discovered runt of the planetary litter orbits Kepler-37, a star with about 80% the mass of the Sun and not quite the Sun's temperature. Data containing the telltale signals of planetary transits were collected over 978 days, showing three planets in the system: Kepler-37b, Kepler-37c, and Kepler-37d. Kepler-37b is the record-breaker, even smaller than Mercury.

Measuring the size of transiting planets is possible because the star is almost as massive as the Sun, so astronomers can observe oscillations similar to those seen on the Sun to determine a precise radius and mass for the host star. Once the size of Kepler-37 is known, the size of any transiting exoplanet is straightforward to calculate, and they are all relatively small: 0.3, 0.7 and 2 times the size of Earth, respectively, for Kepler-37b, Kepler-37c, and Kepler-37d.

With a radius about a third of Earth's, Kepler-37b is about the size of the Moon and smaller than Mercury. It’s pretty close to its host star, with an orbital period of just 13 days, so it's much closer than Mercury, which takes 88 days to complete an orbit. Even though the host star is a little cooler than the Sun, Kepler-37b is likely too hot to support liquid water, and thus life.

"Owing to its extremely small size, similar to that of Earth’s Moon, and its highly irradiated surface, Kepler-37b is very likely a rocky planet with no atmosphere or water, similar to Mercury,” Barclay and his team report.

Kepler has been a gold mine for transiting exoplanets, due to its exquisite sensitivity and precision. With Kepler’s most recent data release, astronomers have shown that Earth-size worlds are probably common.

As smaller planets are discovered, those conclusions may be extended to even smaller planets: "While a sample of only one planet is too small to use for determination of occurrence rates,” Barclay and his colleagues add, “it does lend weight to the belief that planet occurrence increases exponentially with decreasing planet size.”

This isn’t likely to be the smallest known exoplanet for very long either. Soon, planets smaller than Earth’s Moon and then even planets approaching Pluto’s diminutive size are bound to be found, since it’s normal for small objects to be more common than large ones. The need for an improved distinction between what constitutes a planet and a dwarf planet looms large.

Uh-oh, I just came across something that in the judgment of some may rob Kepler-47b of full planethood status. The I-phone app Exoplanet shows this object to have an orbital eccentricity of .715, placing it in an orbit that crosses the orbit of Kepler-17c! If this is correct then it may be doomed to dwarfdom just like Pluto was for the sins of being both small and for crossing the orbit of Neptune. The IAU really needs to drop the cleared its neighborhood clause from the list of planetary criteria.

I'm confused by a couple of things in Bruce's second post. First, he refers to "Kepler-47b", which is probably just a typo for -37b. But then he refers to -17c, which sounds like a different star entirely! Oh wait, that could be a typo for -37c. Doh! Never mind.

Richard, thanks, and I sincerely mean it, for alerting me to the fact that my second post was rife with error. Yes, both numbers should have been 37, as this tiny planet is in the Kepler 37 (I just double checked!) system. But wait, there's more error here. I checked NASA's Kepler Mission discoveries page and 37b's eccentricity is listed as being unknown, so it seems that the the entire post was prompted by an error in an app's database. Doh indeed. Of course, if not for the dwarf planet controversy ...

I contacted the Exoplanet app's developer Hanno Rein and, while he does acknowledge the uncertainty, he informed me that the eccentricity his app shows for this planet comes from the Nature article announcing this discovery. That means that the points I made in my second post in this thread may in fact be valid (after correcting numerical typos).

The authors of the paper ran dynamical simulations for the entire Kepler 37 system. Their words below:

"We ran a dynamical simulation to determine whether this system of
three planets is stable. For the initial conditions, we use the observed
orbital period and the epoch of first transit for each of the three confirmed planets, and assume coplanar orbits. ...For
each planet, we performed 1,000 integrations over 100,000 years, each
using initially circular orbits for the planets. All planets were found to
be stable over the entire simulation."

I don't have the eccentricity values in front of me, but these types of simulations are usually good enough to confirm stability over the timescales tested.