Next summer marks the centennial anniversary of one of Earth's most famous "close encounters" with an extraterrestrial object. On June 30, 1908, something big exploded in the sky over a remote section of Siberia near the Podkamennaya Tunguska River. The blast leveled about 800 square miles of forested taiga. 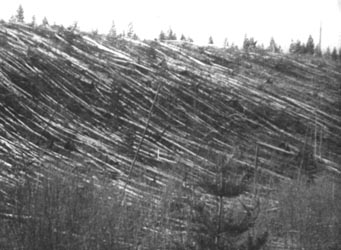 Trees near the Podkamennaya Tunguska River in Siberia still looked devastated nearly two decades after a large meteorite exploded above the ground in June 1908. The Tunguska event, which ranks as one of the most violent cosmic impacts of this century, leveled nearly 800 square miles of forested taiga.

That much scientists can agree on.

But for decades they've debated what exactly caused the airburst — wild speculations have included everything from mini black holes to exploding alien spacecraft. The general consensus is that the impactor was a chunk of asteroid or perhaps a small comet, but there's still disagreement on how big a kinetic-energy punch it delivered. Most estimates for the blast's energy range from 10 to 40 megatons of TNT, consistent with an impactor roughly 150 to 300 feet across.

The problem is that evidence has been piling up that objects of that size shouldn't hit Earth very often, once every couple thousand years or so. This has forced researchers to try to explain Tunguska's widespread devastation with something smaller and thus likely to strike Earth more often. 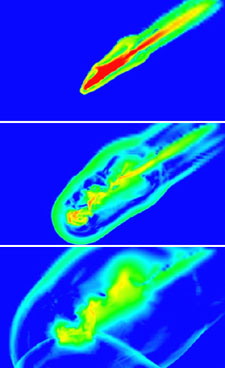 These three frames are from a computer simulation of the 1908 Tunguska event. An impactor with 5 megatons of kinetic energy disintegrates and explodes 8 miles up, sending a supersonic blast wave downward to the ground.

In one of those "doh!" moments, two explosion modelers from Sandia National Laboratories realized that the Tunguska event wasn't simply a big bomb going off 5 miles up. Instead, argue Mark Boslough and David Crawford, the incoming mass exploded while still headed toward Earth at hypersonic speed. This means more of the blast wave was directed downward (in what Boslough terms "supersonic white-hot mega-tornado rings").

So a smaller impactor packing just 3 to 5 megatons of kinetic energy, something well under 100 feet across, would do nicely. The bad news is that uninvited guests of this size strike our planet every few centuries, on average.

The key to this downsizing was using powerful supercomputers to grind out high-resolution 3D simulations that more realistically model the blast's effects. In fact, Boslough told me, the Tunguska blast could not have been due to a more powerful (15-megaton) event, because the new simulations show that ground zero for the blast wave would have been completely incinerated.

For an impact junkie like me, this is fascinating stuff. It raises the possibility that the explosion's effects extended farther downrange than had been believed. Maybe the Italian-led team that claims to have found a crater-shaped lake downrange from the blast's epicenter is onto something.

Boslough and Crawford's full article should appear soon in the International Journal of Impact Engineering, but you can get more details (and see video clips of the computer simulations) by checking out the Sandia press release issued earlier this week.

Considering the theory of an object exploding while 'heading towards earth'. At what point would an object have to be, to explode and affect such a small area on the planet such as 800 acres. The reading suggests 'heading towards earth' would be outside our atmosphere?, or inside? It would only seem the logic would say Inside, but that would seem to kill the size theory of the object. 800 square miles would seem to have a containment factor that would delegate an almost surface compression. Does the vegetation involved with the blast, have an epicenter, or an 'away from' attitude? I can certainly see why there is speculation on the 'how it came to be' I wouldn't think an erratic spacial object had any involvement at all considering the bare facts.

I don't know where you got the 800 acres. All trees were blown over on 800 square miles. The only trees not blown over were in the center and they were striped of limbs and bark as would be expected from an aerial explosion. That there was an aerial explosion is well accepted. What is unknown is what blew up and why.Some scientists claim the object approached at an angle of 115 degrees elevation from 31 degrees north. They used computer simulations for this.
The trees do have an'awayfrom' pattern. The pattern is in the shape of a butterfly which is consistent with high altitude explosions.
As I said all evidence points to something blew up in the air.

Whilst it would be great to find the Tunguska impact crater after all these years, I am rather sceptical about the crater-shaped lake referred being it. Not only is the lake far from circular, it just happens to intersect with a sinuous river which has a number of oxbow lakes. I am no expert, but I suspect that this lake is more likely to be an oxbow lake in the making.

When we were young we used to listen to the mystery stories of our dear Mother. She and all other relatives of her lives or has lived on the island of Camiguin situated at the northern part of Mindanao, Philippines. She told us of a story about her great great grandmother witnessing a fiery ball of light which darkened the sun and moving across the sky at great speed and disappearing behind trees and mountain. She was also told that a loud explosion like sound shook the ground (probably a SONIC BOOM) whilst ball of fire was disappearing behind a mountain and so her great great grandmother thought the impact was just behind it. Upon investigation there was none and so it became s a big mystery to them as they did not have access to newspapers back then. If they only new that the impact would be thousands of kilometers away! My mother also mentioned vividly the year that it happened which was 1908. So, that year got stuck in my mind as a child until I stumbled upon this story back in grade 5 while reading mysteries of the world. Just wanted to contribute this for you guys to determine the correct entry point and angle of entry as seen by witnesses.