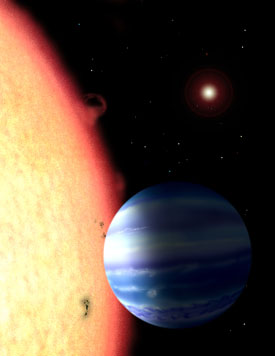 Some "hot Jupiters," like the exoplanet designated OGLE-TR-56b depicted here, orbit their stars so closely that tidal forces are gradually dragging them to their doom.

David A. Aguilar / Center for Astrophysics

Dynamicists have struggled to understand how this and the many other "hot Jupiters" found since then managed to orbit so tightly without being gobbled up. Some were perhaps flung into their star-skirting orbits after losing tugs-of-war with other massive planets in their systems, and some were probably dragged inward along with the natal disks of matter around their young Suns. After the disks dissipated, these massive worlds were deposited in precarious but seemingly stable orbits

There they might remain, roasting for eons, were it not for the tides these close-in planets incite in their stars. For some, long-term survival is not in the cards.

Why so? Consider how the Moon raises tides in Earth's oceans. Because our satellite takes a month to complete one orbit, whereas Earth spins in just 24 hours, the exchange of tidal energy is a net gain for the Moon, which is edging ever farther from Earth.

But a hot Jupiter completes its orbit in a few days — sometimes in less than 24 hours — creating stellar tides that have the opposite effect. Slowly, inexorably, the planet is dragged to its doom. 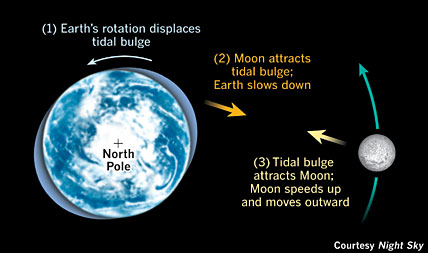 Earth tugs on the Moon and the Moon tugs back, causing tides in our oceans. Because of tides, an energy transfer takes place: Earth's rotation slows (days get longer), while the Moon gains orbital energy, causing it to slowly migrate farther away. Some hot Jupiters, however, orbit faster than their suns spin, so the tidal exchange gradually draws them inward instead.

That's the fate of OGLE-TR-113b, a hottie with 1.3 times Jupiter's mass crowding a Sunlike star 1,800 light-yeas away in Carina. Because it transits, or passes directly in front of its star, astronomers can time the planet's orbital period exactly. (TR in its designation is for transit; OGLE stands for Optical Gravitational Lensing Experiment.)

As Elisabeth Adams told a meeting of planetary scientists on Friday, precise timing of six such transits over the past few years reveals that OGLE-TR-113b's 34⅓-hour orbital period does seem to be very gradually shrinking. Using the timings she and her observing team made with the 6.5-m Magellan Telescopes in 2007-09, Adams finds that OGLE-TR-113b shaves about 60 milliseconds off its period each year.

It's possible, she notes, that the system contains a massive but as-yet unseen companion that's yanking the planet around. Some kind of librating resonance with a second planet isn't out of the question either, though the perturber couldn't have more than twice Earth's mass. Instead, the simplest explanation is that astronomers have, for the first time, captured a hot Jupiter in its death spiral.

So when might we kiss OGLE-TR-113b good-bye? Adams emphasizes that it'll happen long before the planet actually reaches the star's surface. Rather, the point of no return occurs when the orbital period shrinks to 10.8 hours. By then the planet will be close enough for tidal forces to rip it apart. Depending on assumptions about how strongly the star and planet are interacting, the end could come only 1½ to 2 million years from now. 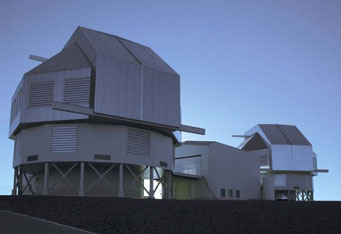 Twin 6.5-m Baade and Clay telescopes were built for the Magellan project in 2000 and 2002 by the Carnegie Institution of Washington. They are sited at Las Campanas Observatory in Chile.

"This detection is still quite tentative," writes the team in a paper submitted to the Astrophysical Journal, in part because there's a less-than-perfect fit to other timings made in 2002 and 2006. Clarity should come early next year, when OGLE-TR-113b again becomes observable and more transits can be clocked.

"Other people have been on this trail," Adams adds, with the hot Jupiter OGLE-TR-56b also getting special attention. Discovered in 2002 and orbiting just 2.1 million miles (3.4 million km) from its stellar host, it might meet its doom in as little as a million years.

The same holds (as stated above) for a planet revolving around a star, except for one thing: The star's "solar" wind. Stars rotate more and more slowly as they age, since they are continually losing angular momentum to the gas they eject. So... a very close planet could have a stable orbit (initially being pushed farther away from its star) for some time, but, when the star's rotational period slows to where it's longer than the planet's orbital period, the planet is no longer in a stable orbit. Then it starts moving closer, and eventually (like Phobos) will be destroyed. Well, that's gravitational disruption in both cases, but the destruction of a gas giant planet won't look much like the crumbling of a small rocky moon.

The actual dynamics get pretty complex though: First, as the rotation of the star slows, the energy transfer slows. (In many cases the planet would be pushed out fairly quickly, then pulled back too slowly to ever be destroyed.) Second, the process is somewhat non-intuitive, since tidal forces are inversely proportional to the cube of the distance, rather than the square (as in simple gravitational attraction).

So is there any chance that the strong magnetic fields like those that are prevalent on our sun could actually be stronger than the gravity that is pulling on the jupiter like planet in and repell it outward instead?

Marsh, for large bodies like a planet or star the gravitational forces are going to be much greater than the electromagnetic forces. But that doesn't really matter, since the interaction of the magnetic fields, when the planet is revolving faster than the star is rotating, will be transferring energy from the planet to the star. In other words, the magnetic field interaction will be working WITH the tidal forces, not opposing them.

Will it melt a bit before it reaches the star's surface?