Tiny temperature irregularities in the cosmic microwave background are mapped on this full-sky projection. The average temperature is 2.725 kelvins (degrees C above absolute zero; equivalent to –270° C or –455° F). The colors represent the tiny temperature deviations from this, as in a weather map. Red regions are warmer and blue regions are colder by only about 0.0002 degree. Click image for larger view.

WMAP has been mapping the sizes and strengths of the slight irregularities in the cosmic microwave background radiation filling the sky. The microwave background is the "wallpaper" on the sky behind everything else seen in the universe. The slight temperature irregularities written on it (seen on the all-sky map here) tell much about the cosmic conditions just 380,000 years after the Big Bang, when the universe first became transparent to its own radiation — and before, right back to the Big Bang itself.

The two more years of data have further beaten down the statistical uncertainties in the cosmic background map, allowing analysts to refine what it tells us about the cosmos as a whole. If the new, revised results didn't make much news, it's because they show modern cosmology to be steady on course. The better data only firm up confidence in what we already thought we knew. 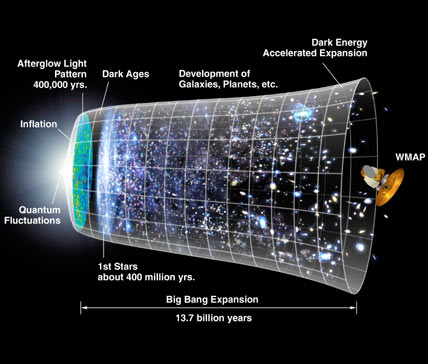 This representation symbolizes the evolution of the universe over 13.7 billion years. The far left depicts the Big Bang, the earliest moment we can yet probe, when an extremely brief moment of "inflation" produced a burst of exponential growth. (Size is symbolized by the vertical extent in this graphic.) For the next several billion years, the expansion of the universe gradually slowed, due to the gravitational pull of everything on everything else. More recently, the expansion has begun to speed up as the repulsive effect of dark energy has come to overpower the universe's self-gravity.

Today's microwave background radiation was emitted 380,000 years after inflation, when the stuff of the universe first became transparent. The conditions of earlier times are imprinted on this radiation; it also forms a backlight for later developments of the universe. Click image for larger view.

âThis property matches Albert Einstein's idea of a âcosmological constant,â which he inserted into his equations in 1917, and pretty much rules out the idea that the dark energy is some kind of "quintessence" existing in space that thins out as space expands.â Exactly.
The observed magnitude of dark energy, or âlambdaâ in Einstein's equations, can be found from the simple relation, lambda=k/R^2. See http://www.dark-energy.org/ for an explanation of k & R, and a derivation of this equation.

The following quote is taken from the NASA press release:

[T]he new WMAP data together with other data show that the effective number of neutrino-like species is 4.34 Â± 0.87.

Could someone clarify what exactly this sentence tells us?

A few decades ago, I never would have dreamed we'd ever get some of these results to such precision. Age of the universe to better than 1%! Flatness parameter to 1/2%! And CMBR temperature (from FIRAS on CoBE) to better than 1%! This is an astounding project! 50 years ago, cosmology was the very farthest thing from a precision science. If you could nail something down to within a factor of 2, you were doing exceptionally well. And now...just look at this!

There is no inflation. The universe WAS small then. The paths of light curve so that all directions get light from the same point.

This is a relativity effect, not a violation of the laws of physics.

It truly mystifies me that scientists & most everyone else still believe the universe is expanding, when it is actually revolving on a curved path around an axis. Reminds me when everyone looked at the horizon and declared the earth to be flat.