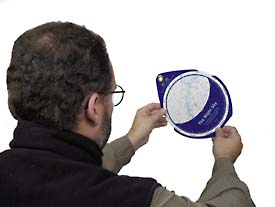 Using a planisphere, or 'star wheel,' soon becomes second nature for stargazers. Here an observer gazes at the eastern horizon with the guidance of The Night Sky, a planisphere designed by astronomer David Chandler.

The movements of the stars have taxed the human mind throughout the ages — from ancient Babylonians seeking to predict sky events, to Greek philosophers wrestling with the structure of the universe, to beginning skywatchers today trying to figure out where's the Andromeda Galaxy.

The turning of the celestial sphere perplexes everyone who takes up skywatching, but sooner or later the picture snaps into place and the whole setup becomes obvious. However, those who think the sky's motion is inherently simple should try explaining to a beginner why every star follows a different curved path across the sky at a different speed. And why do some stars move from west to east while most move east to west? Can you explain why some constellations turn somersaults during the night while others just tilt from side to side?

To bring the sky's motion down to Earth, astronomers for millennia have built little mechanisms that duplicate it. A working model not only illustrates how the sky turns but can help locate objects at any given time. The simplest sky model is a planisphere.

Untold numbers of these star finders have been designed and published in the last century. Even the most experienced observers rely on them, especially at unfamiliar hours of the night. The word "planisphere" simply means flat sphere. It has a map of the sky that pivots at the celestial pole. As the map revolves around the pivot, it slides under a mask that represents your horizon. Turning the map mimics the apparent daily motion of the sky, complete with risings and settings at the horizon edges. 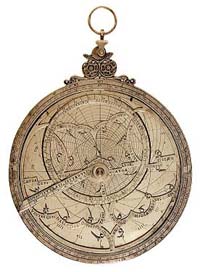 Modern planispheres are direct descendants of the astrolabe, such as this one made in Nuremberg, Germany, in 1532. The ornate scrollwork supports 27 points that form a rudimentary star map; each point is labeled with the name of a star or constellation. On the plate under them are lines marking the local horizon, altitude, and azimuth.

The basic idea behind the planisphere was used in ancient Rome. The architect and engineer Vitruvius, writing around 27 B.C., described a star map engraved on a solid plate and a horizon mask that rotated over it to show the risings and settings of celestial bodies. A water clock turned the mask once a day to keep up with the sky. Nearly two centuries later, Claudius Ptolemy analyzed the map projections used for such devices in his treatise Planisphaerium.

By the 4th century A.D. a version known as the planispheric astrolabe was in use. Its star map was a skeletal metal framework sliding over a solid plate engraved with the observer's horizon. Medieval Arabs and Persians refined the astrolabe to a peak of versatility and beauty. Some of these ornate "mathematical jewels" made their way to Europe, where they were prized as almost magical. "All the conclusions that have been found, or might be found in so noble an instrument as an astrolabe, are not known perfectly to any mortal man in this region," wrote Geoffrey Chaucer in 1391. By the end of the Middle Ages, astrolabes were the universally recognized trademark of astronomers and astrologers.

Astrolabes were commonly used to sight on the Sun and stars to tell time. The invention of accurate clocks allowed this procedure to be reversed. If you knew the time, you could use this kind of device to find stars. And that is how planispheres have been employed ever since.

In principle nothing could be simpler. You turn a wheel to put your time next to your date, and presto, there's a custom-made map of the stars that are above your horizon for that moment. The edge of the oval star map represents the horizon all around you, as you would see if you were standing in an open field and turned around in a complete circle. The part of the map at the oval's center represents the sky straight overhead — pretty much like the all-sky map in Sky & Telescope each month, or the interactive star chart on this site.

In practice, several complications can throw beginners off.

Setting the time and date. On January 1, this planisphere is set to show the sky at 9 p.m.

First, sadly, many planispheres on the market are so poorly designed that they would frustrate an expert. The worst problem is carelessly drawn star maps that make all stars, whether very bright or very faint, look too much alike. Planispheres with gimmicky glow-in-the-dark stars are the worst offenders in this regard; the glow paint can't be printed very accurately, so all stars come out looking more or less alike. The result is star patterns that look nothing like what you'll see in the sky.

Other issues are inherent to even well-designed planispheres. One is that the map is necessarily small and distorted. It compresses the entire celestial hemisphere above and around you into a little thing you hold in your hand. So be aware that star patterns will appear much bigger in real life than on the map.

Because the map is so small, moving your eyes just a little way across it corresponds to swinging your gaze across a huge sweep of sky. The east and west horizons may look close together on a planisphere, but of course when east is in front of you, west is behind your back! Glancing from the map's edge to center corresponds to craning your gaze all the way from horizontal to straight up.

There's only one way to get to know a map like this. Hold it out in front of you as you face the horizon. Twist it around so the map edge labeled with the direction you're facing is at the bottom. The correct horizon on the map will now be horizontal to match the horizon in front of you. Now you can compare stars above the horizon on the map with those you're facing in the sky. Ignore all the parts of the map above horizons you're not facing.

Then there's the distortion issue. On a planisphere designed for use in the Northern Hemisphere, constellations in the southern part of the sky are stretched sideways, taffy-like, making it hard to compare them with real star patterns. This problem doesn't exist on a well-designed map drawn for fixed dates and times — such as the one in the center of each month's Sky & Telescope or the interactive star chart on this site.

A further complication is that a planisphere works correctly for only one narrow range of latitudes on Earth. Fortunately, many models come in several editions, each for a particular latitude range. 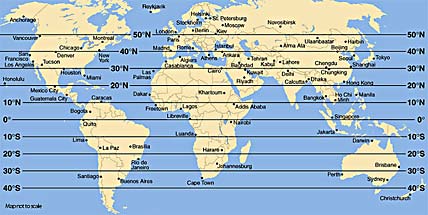 If you don't already know your latitude, you can use this map to estimate it accurately enough to choose an appropriate planisphere.

Then there's the matter of daylight saving time ("summer time"). When this is in effect, remember to "fall back" to standard time by subtracting an hour from what your clock says before you set the planisphere's dial.

Actually, planispheres don't work in standard time either, but rather in something called local mean time. The difference between the two, which depends on where you live in your time zone, can amount to 30 or 40 minutes or more. It results from the fact that the Earth is round — and that the curvature of the Earth's surface is noticeable even when you go a few miles east or west. On average, the Sun, Moon, and stars rise, transit, and set an hour later on the western side of your time zone than on the eastern side of it.

The local mean time correction (in minutes) for various U.S. cities is given in the following table. Apply the numbers in the table to your standard time to get local mean time, which is planisphere time. Fortunately, even a half hour one way or the other doesn't really matter for most star finding, so you can probably get away with ignoring this refinement if you want.

In fact, if you just want to know which constellations are up and where they are, a planisphere's limitations can largely be overlooked. It's remarkable that such a simple working model of the sky can work so well.