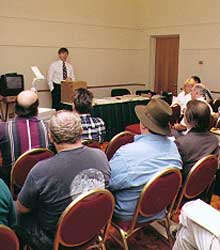 Pre-1980:
The International Union of Amateur Astronomers (IUAA) organizes observing commissions to collect data for use by professionals.

1988:
A two-day meeting leads to the passage of a resolution by the IAU General Assembly recognizing and encouraging further cooperation with the amateur community.

1991:
The Corporation for Research Amateur Astronomy holds a symposium in La Paz, Mexico, and its proceedings are later published.

October 1998:
A topical workshop at the annual meeting of the AAS's Division for Planetary Sciences in Madison, Wisconsin, explores avenues for collaboration using existing and proposed amateur organizations.

December 1998:
The Committee of the AAS Division for Planetary Sciences approves a resolution endorsing the furthering of professional-amateur cooperation.

A proposal for creating the Working Group on Professional-Amateur Collaboration (WGPAC) is submitted to the AAS Council.

May 2001:
Dirk Terrell conducts a workshop on observing eclipsing binaries at the AAVSO's annual meeting in Madison, Wisconsin.

July 2002:
A session at the annual convention of the Astronomical League (ALCON) in Salt Lake City, Utah, debuts the first WGPAC-sanctioned workshop on advanced observing techniques.