Move over Jupiter, it's time for Saturn to shine! At opposition this week, the ringed planet is at its brightest and closest for the year.

Saturn's back! It joins Jupiter in the southern sky at the end of dusk for a one-two punch of planetary pulchritude. Jupiter leads the way, shining brilliantly in Scorpius in the southern sky near the end of dusk. Saturn hangs its light three outstretched fists to Jupiter's lower left in the constellation Sagittarius. You'll immediately notice several little stars near the planet dubbed the Spoon. It's one of three asterisms — easily recognizable patterns of stars — in that constellation. The others include the main outline of Sagittarius, better known as the Teapot, and its handle, the Milk Dipper, suitable for dipping in the nearby Milky Way.

Saturn reached opposition on July 9th at 1.4 billion km from Earth. For Saturn, that's close, so we see it at its biggest and brightest for the next couple months. The tilt of its rings makes a big difference, too. They're well-presented with a cant of 24°, only 3° shy of maximum. Saturn struts around at magnitude +0.1 with a diameter of 18.4″ (arcseconds), similar to the apparent size of Mars at a modest opposition. The planet's diameter broadens to 42.9″ if you include the rings.

We view Saturn's northern hemisphere this year along with the north face of the rings. Like Jupiter, Saturn sits near the "bottom of the bowl" at the south end of the ecliptic, so it never climbs very high in the sky as viewed from mid-northern latitudes — only about 25° high from the central U.S. Because of atmospheric turbulence prevalent at low altitudes, the planet often looks soft and blurry, so it helps to observe it regularly in hopes of catching sharper views on nights of calm air.

In a quirky coordinate coincidence, both Jupiter and Saturn share the same declination of –22° 08′ on July 18, so observers with equatorially-mounted scopes can center Jupiter in the field of view and swing the scope across 30° of sky to find Saturn at nearly the same spot. Speaking of fun visuals, the full Moon will be in close conjunction with the planet overnight Tuesday, July 15th. The two will rise together shortly after sunset and reach a closest separation of just ¾° around 3 a.m. Central Daylight Time (8h UT) on the 16th.

Thus far this season I've succeeded in observing the planet on three nights of excellent seeing. Besides the raw beauty of Saturn's exceptionalism I've seen some nice details including the three primary rings, a pale gray north equatorial belt and the dusky gray north polar region. All were plainly visible in my 10-inch Dob at 180×.

Each ring varies in width and intensity from the narrow, outer A ring, to the wide and bright B ring, to the filmy, dusky character of the innermost C ring. I also discerned Cassini's Division, the narrow, black gap between the A and B rings, almost all the way around the planet. Composed of 99.9% water ice with sprinklings of impurities, the rings vary in thickness from as little as 10 meters to a kilometer! Enjoy them while you can. The recent Cassini discovery of ring rain coupled with the equatorial flow of ring material into the planet's atmosphere could mean they'll be gone in 100 million years.

The rings hide most of the planet's southern hemisphere, but the northern is in plain view. Check it routinely for unusual activity as it's famous for occasional outbreaks of "white spots," huge storms that well up from below the upper cloud deck. That last really big one occurred in late 2010–2011 and was plainly visible in amateur telescopes.

Being composed of water ice, the rings reflect light well and appear noticeably brighter than the planet's golden globe. The difference between rings and disk can be stark around the time of opposition due to the Seeliger Effect. At opposition, the Sun strikes the ring particles face-on from our perspective, so the shadows they cast are tucked out of view behind. Without shadows to partially cancel the light, the rings surge in brilliance. It's quite obvious at the moment. When you observe the planet, make a mental note of the rings' appearance and then compare the view to their appearance in a few weeks.

While Jupiter's primary moons are all easily visible in the smallest of telescopes, Saturn's are more diverse in terms in brightness and distance from the planet. And because Saturn's axis is tilted 26.7°, the moons describe orbits in looping ovals around the planet rather than the more familiar chorus line at Jupiter.

I've heard that Mimas (13.1) is visible in a 12.5-inch scope, but I've never seen it in either the 10- or 15-inch. Mimas orbits very close to the planet with a period of just 23 hours and is extremely difficult to coax from the glare of the rings. Would-be Mimas watchers would do well to to mark their observing calendars for May 2025 when the rings are next edgewise and disappear from sight for a time. Some things you just gotta wait for.

Let's return for a moment to Iapetus, arguably Saturn's most entertaining moon. When at western elongation in its 79-day orbit, it shines at magnitude 10, second only to Titan in brightness, but fades to 12th magnitude at eastern elongation. The variation is caused by which side of the moon we see. When east of the planet, we view the dark, rocky side; when west of Saturn, we see the ice-coated hemisphere.

This month we're in luck! Iapetus reaches western elongation on July 15th and will be bright and easy to spot west of Saturn through month's end. You can keep track of the Saturn's five brightest moons at Sky & Telescope's interactive Saturn's Moons site. To find these moons and the rest, download Stellarium, pick a date and time, zoom in on the planet, and prepare to be enthralled.

Bob, a timely and excellent report on Saturn 🙂 I was out last night during opposition and viewed Saturn using my 90-mm refractor (2200-2330 EDT). Saturn retrograding in Sagittarius near Albaldah star or Pi Sagittari. At 31x and about 1.6-degree true FOV, I could see Saturn, rings, Titan and the star in the same FOV. Both moved across the FOV at the same angular velocity - Earth is spinning :). I enjoyed looking at Saturn from 31x to 179x views, clear night, cool temps and the waxing gibbous Moon in Virgo just past First Quarter, bright moonlight on the fields and woods while I viewed. The Cassini division distinct, some cloud banding and shading in north polar region visible. Tracking and observing the planets through the weeks and months can teach much about the heliocentric solar system and the Earth rotating. Albaldah is some 3.5 million times farther away from Earth than Saturn (about 510 LY vs. a bit more than 9.0 au for Saturn). On July 01, I enjoyed viewing Saturn using my 10-inch telescope with low power, wide field view, 2-inch eyepiece during a previous, clear, cool night (temps in mid to low 60s). Great views with Saturn, rings, five moons, and plenty of stars all around in Sagittarius in the eyepiece. Observing Saturn does indeed, *Sweeten the Night*.

Hi Rod,
Thanks! And I appreciate you sharing your observations and personal reflections with our readers. I'm sure they enjoy reading them as much as I do.

Thanks Bob. Saturn is sweet.

It is an interesting coincidence that Jupiter and Saturn will be at the same southerly declination on July 18, but on opposite sides of the Sun's December solstice point. Saturn finally starting to climb northward along the ecliptic last October, and Jupiter will turn north this coming December and catch up to Saturn in a December 2020 conjunction. That will be something to see! Jupiter will appear highest in the northern hemisphere sky in 2026, and Saturn will keep climbing north from one year to the next until 2033.

I've mostly been catching naked eye and binocular views of Saturn. San Francisco was mostly cloudy on Monday and Tuesday night, but even through the occasional break in the clouds Saturn was exceptionally bright. Last night was clear and I stayed up late to look at Saturn through the little refractor. A blurry view at 75x was enough to show the rings and Titan, and I went to bed happy. Over the next couple of months Saturn will be higher in the evening sky, and I won't have to stay up so late.

Is the Iapetus diagram drawn with north up?

Hi Anthony,
I enjoy watching all planets climb north from the belly of the ecliptic and look forward to those times when Jupiter and Saturn are much higher up in northern skies. About the diagram — I didn't pick any particular north or south. It's for illustration purposes.

Thanks Bob. Maybe it's just my mental wiring, but the diagram only makes sense to me with north up. If south is up, celestial east and west would be reversed.

Hi Anthony,
I went back to it and yes, north is up. For clarity's sake I added that to the caption. Thanks for your comments!

It's not just me!

Saturn was a big hit at our monthly public astronomy night on Mount Tamalpais last night. Jupiter looked better through a telescope, but Saturn has rings!

Anthony, it sounds like you and others enjoyed some good views of Saturn at your observing site - great for you folks. Friday night on 12-July here in Maryland was some good observing weather. I used my little, 90-mm refractor and enjoyed Saturn at 129x views 🙂 I enjoyed excellent views of Saturn using the 14-mm eyepiece with 1.8x Barlow lens - no filters (near 11:30 PM before transit). Very good views of the Cassini division, some cloud bands, and shading in north polar region. Titan visible near 10:00 position, north up, mirror reverse image. The 90-mm refractor provided fine views of Saturn tonight with Cassini division very distinct. Saturn retrograding in Sagittarius and near 6:30 position of the star, Albaldah. I could see both with unaided eyes. Continue the good work of observing and showing folks the night sky 🙂

Thanks Rod. You had a good view of Saturn! 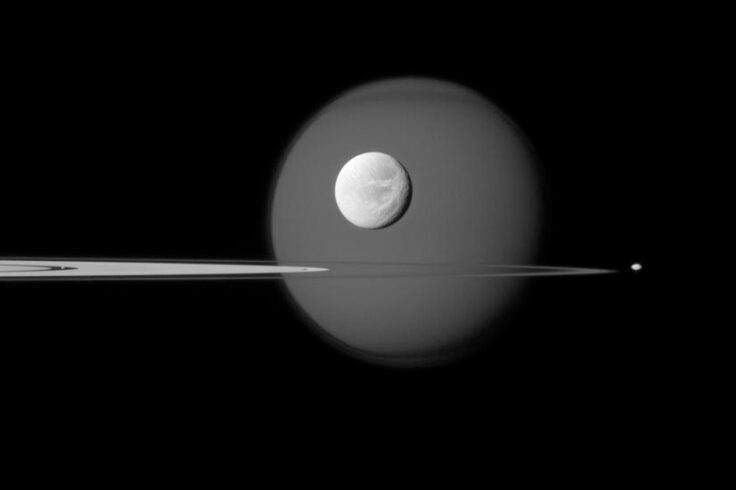