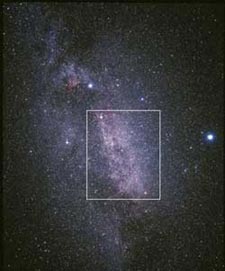 Thousands of stars crowd this image of the Northern Cross; the bright star Vega is visible to the right. The rectangle outlines the area covered by the star chart below.

Cygnus is usually considered a summer constellation, but early risers in March can get a preview of the Swan as it climbs into the northeastern sky before dawn. This month the Swan's neck contains an "extra" bright star -- the long-period variable Chi (c) Cygni, now reaching maximum brightness. Tracking its changes is a fine project for binocular skywatchers, but this year naked-eye observers can also get into the act.

Chi Cygni is one of the brightest and best-known of the red long-period variable stars (Mira stars) with a period of 408 days. But keep in mind that the behavior of variable stars is never entirely predictable. Maximum brightness is likely to occur sometime between March 5th American Association of Variable Star Observers prediction) and March 10th (according to the Variable Star Observers League in Japan). 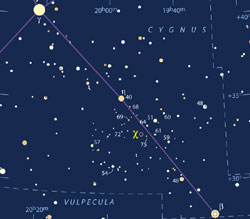 This chart shows the location of Chi Cygni within the neck of Cygnus, the Swan. The numbers near other stars are their visual magnitudes to the nearest tenth (with the decimal points omitted) for comparison. Use them to estimate Chi's magnitude each night you take a look. Click on the image for an enlarged view of the chart.

This year's maximum is shaping up to be very unusual. Normally Chi Cygni peaks out around magnitude 5.2, but as of late February it was already up to magnitude 4.1 and easily visible to the naked eye. Chi Cygni is in the long part of the Northern Cross, 3/5 of the way from Gamma (magnitude 2.2) to Beta (magnitude 3.0) Cygni. Use the chart on the right to find this star; Chi's strong orange color helps identify it.

After maximum Chi Cygni should remain visible for a few weeks as it slowly fades back toward its minimum brightness.