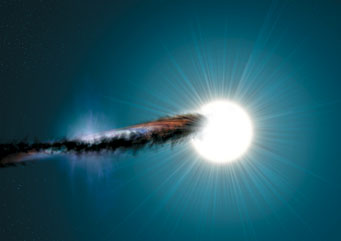 Robin Leadbeater of Wigton, UK, has reported spectroscopic signs that the long-awaited eclipse of Epsilon Aurigae is beginning.

Epsilon Aurigae is one of the most remarkable eclipsing variable stars in the sky. With most eclipsing variables, two orbiting stars periodically block each other's light as one star passes in front of the other. But in the case of Epsilon Aurigae, the eclipsing object appears to be a huge, elongated opaque disk. Presumably, there must be one or more stars in the disk's center to provide the known mass and keep the disk from flying apart. But then why are they invisible? In any case, Epsilon Aurigae is one of astronomy's great mysteries — and arguably the strangest star that's readily visible to the unaided eye. Astronomers are in urgent need of fresh detailed observations to help them characterize this extraordinary star system. 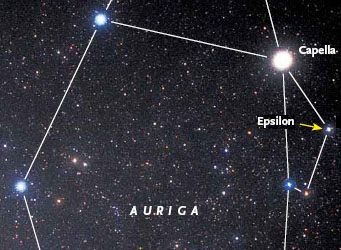 The eclipses come only every 27.1 years. Epsilon is predicted to fade from its current magnitude of 3.0 to 3.8 by the end of 2009, then remain near its minimum brightness until March 2011.

Leadbeater's announcement is based on his detection of a subtle shift in a spectroscopic absorption line, as the semitransparent fringe of the dark object begins to cross the face of the primary star. (Click here to see the details on Leadbeater's website.) The actual dimming is too small to detect so far. But if you're interested in variable-star observing, this is the time to start making systematic magnitude estimates. The American Association of Variable Star Observers (AAVSO) is coordinating a global campaign to observe this eclipse.

Click here to download a 1.8-megabyte PDF of Robert E. Stencel's article "The Very Long Mystery of Epsilon Aurigae" from the May 2009 issue of Sky & Telescope. 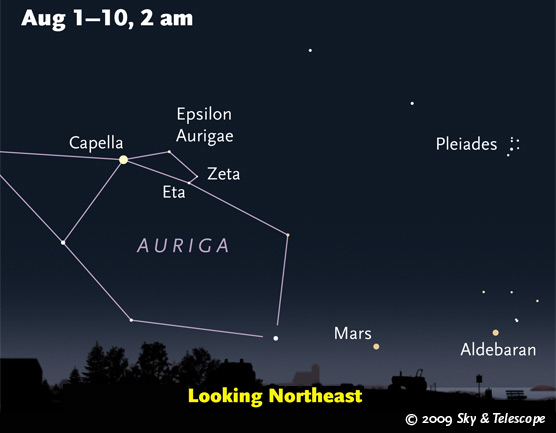 For now, Auriga doesn't rise in the northeast until very late at night. But after it does, here's where to spot Epsilon Aurigae (if you live in the mid-northern latitudes). It's currently a trace brighter than Eta Aurigae, which is magnitude 3.2. But by winter it should dim to match Zeta, magnitude 3.8.

You can find more information on this observation on my website here
http://www.threehillsobservatory.co.uk/astro/spectra_40.htm