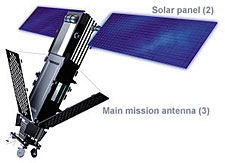 When deployed as intended, an Iridium communications satellite's axis points to the center of Earth, while three silvered Main Mission Antennas (MMAs) lean outward, peppering the Earth with data-bearing radio transmissions — and the occasional glint of sunlight. (The third MMA lies behind the triangular spacecraft in this depiction.)

You're out in your yard at night, observing the stars. Suddenly you notice an incredibly bright flare growing in the sky, one that outshines Venus 100 times over. It moves slowly and steadily, swelling in brilliance before fading away seconds later.

Have you just seen a burning airplane? Some kind of slow-motion meteor? Or perhaps a supernova? More than likely seen sunlight reflecting off an Iridium communications satellite. The satellites' antenna arrays are almost perfect mirrors. And when they catch the Sun just right — wow! 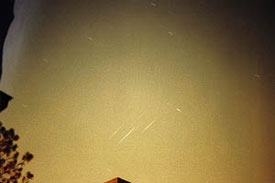 Looking southwest on August 26, 1997, from Houston, Texas, Paul Maley caught five Iridium spacecraft (from left to right, numbers 22 through 26) as they flared while crossing the southernmost reaches of Cetus. Maley took this 90-second photograph at 11:02 UT. Shown here shortly after launch, the spacecraft have since separated to occupy separate positions in a common orbital plane.

Iridium is the first of several anticipated "Big LEO" satellite constellations. Each will contain a large number of low-Earth-orbit (LEO) spacecraft. Several, like Iridium, will transmit digitized phone calls. Others are being designed with wireless electronic mail in mind. Iridium's shiny Main Mission Antennas (MMAs) are built to relay digital traffic at frequencies from 1616 to 1626.5 megahertz. The MMAs are made by Raytheon; the spacecraft are being assembled by Motorola Satellite Communications, Inc., in Chandler, Arizona.

The $5-billion project's 66 satellites orbit the Earth in six evenly spaced orbital planes, with 11 spacecraft in each. Originally there were supposed to be seven planes and 77 satellites. Hence the name Iridium, whose atomic number is 77. Appropriately, perhaps, drawings of the finished satellite array bear a superficial resemblance to the high-school model of electrons orbiting an atomic nucleus. (Understandably, when the constellation was reduced to 66 satellites Motorola chose not to rename it Dysprosium.)

The first five Iridium satellites were launched on May 5, 1997, aboard a Delta II rocket. Amateur satellite observers were anxious to see the quintet in its parking orbit because of the unusual sight they anticipated: several satellites in a row, looking like a line of dots traveling across the sky. They were not disappointed. Within a day of the May 5th launch, spacecraft sleuth Ronald Lee reported seeing all five satellites.

Since Iridium's inaugural launch, American Delta, Russian Proton, and Chinese Long March vehicles have been used to put the rest of its satellites in orbit. Seventy-nine of them now circle the Earth (including spares). Each launch vehicle's dispenser system ejected the satellites into 500-kilometer-high parking orbits, where they typically spent a couple of weeks being checked out by ground stations. The "birds" were then raised by their own onboard propulsion systems to their intended operating altitude of 792 km. In its 100-minute operational orbit, each satellite circles the Earth 14.34 times a day.

A Spark in the Dark

As skywatchers well know, many artificial satellites occasionally brighten as seen from the ground. Indeed, the Hubble Space Telescope is one of the most popular "variable-magnitude" satellites. As Hubble turns to aim at a new target, its solar arrays and highly reflective surfaces can appear to brighten by a couple of magnitudes. So it wasn't a complete surprise when bright Iridium flares were first reported in the summer of 1997 by Brian K. Hunter, a chemistry professor at Queen's University in Ontario, Canada.

On August 16, 1997, Hunter reported the following to fellow members of SeeSat, an electronic-mail group of satellite watchers: "I was observing on Thursday evening [August 14th] when my attention was drawn to a very bright object in the northeast.... It stayed very bright for several seconds and then faded slowly."

"As it faded," Hunter continued, "I picked it up in my 80-mm f/5 telescope at 32x. It faded to a bit less than 6th magnitude by the time it passed 2 degrees above Kappa Pegasi at 01:54:31 [Universal Time]. The timing is dead on for Iridium 4, and the [nonflare] brightness is typical of the Iridium satellites."

As numerous subsequent observers can attest, it's incredibly exciting to get "irradiated." A typical Iridium flare lasts 10 to 20 seconds and can range from "just visible" to "incredibly bright," depending on the Sun-satellite-observer angle. At its peak it's difficult to estimate a flare's magnitude because there's often nothing comparably bright in the night sky. During their brightest periods the spacecraft will typically cross 5° to 10° of sky.

Lee described one of his flare observations on an October 5th posting: "I set up my camera [in Falcon, Colorado]" and saw Iridium #6 appear, "dim at first...then it flared up quickly to [become] the brightest satellite I have ever seen. Sirius looked DIM in comparison."

By September 29, 1997, artificial-satellite followers Rob Matson and Randy John almost simultaneously announced that they had independently figured out how to predict when an Iridium "bird" would flare. Each generously made his program available for free on the Internet. Since then, sites like Heavens Above have taken on the role of prognosticator, and flare predictions for observers located almost anywhere on Earth can be easily acquired.

Mirror, Mirror, on the Sky 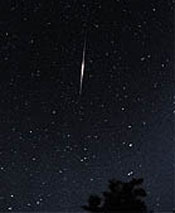 Meteor-like flares from the Iridium communications satellites can now be predicted with freely available software and orbital elements. This photograph of the north celestial pole, taken by Ronald Lee on October 5, 1997, caught sunlight glinting off Iridium satellite number 6.

You may find the brightness of an Iridium flare hard to comprehend until you actually see one. Observers have reported seeing flares as bright patches in the clouds when the sky has been thinly overcast. Many have seen flares in blue daytime skies. Finding daytime flares is similar to viewing Venus during the day: if you know exactly where to look (and in the case of satellites, when) then it can be done.

At first glance, it's rather amazing that each MMA is just a door-size 188 by 86 centimeters. It's hard to believe that what amounts to a full-length dressing mirror can cause such a bright glint from its 800-km orbit around the Earth. But it turns out that each MMA spans about 0.11 square arcsecond on the sky when nearly overhead. A patch of the Sun's surface this size shines at a magnitude of roughly -8 — comparable to a thick crescent Moon.

Brighter-than-Venus flares are visible only from a small area at any given time. A drive across town can convert a merely impressive flare into an incredibly bright one. Prediction programs assume that the MMAs are at their specified angles from the spacecraft's body, that the satellite's main axis is perfectly vertical, and that the Earth is smooth. None of these assumptions holds exactly, so a flare's predicted magnitude should be taken with a grain of salt. That being said, the predictions have often proved to be spot-on.

Statistically, the greater your latitude (north or south), the higher the chances that an Iridium satellite will be visible. The six highly inclined orbital planes converge nearly over the poles. At intermediate latitudes in the winter — poor viewing circumstances — you can expect an average of one or two modest flares per night. The odds of seeing a "monster" flare are much lower.

A Blessing or a Curse> 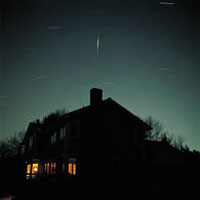 The good news is that the flares, while a potential nuisance for observational astronomers, are too brief to be a major source of light pollution. There are more than 8,000 artificial objects in space, and every one of them has the potential for leaving a streak on a long-duration photographic exposure. So in percentage terms, 72 additional objects and a handful of upper rocket stages do not add up to a very large addition.

In a narrow field of view, the odds that an Iridium flare will occur as you're observing are quite low. But with a wide field, especially a long-duration time exposure, it's certainly a concern. One obvious precaution is to obtain computer predictions before planning astrophotography. If a flare is anticipated within your target's field of view, you can either take the image another time or cover the lens with your hand when the flare is anticipated.

It's possible that a flare could affect dark-adapted eyes. But the flares certainly are not as harmful to night vision as a searchlight or car headlight seen head-on.

Admittedly, it's always regrettable when a new source of light pollution is created. But now that the flares are predictable with a fair amount of accuracy, they can be — depending on your attitude — exciting events in their own right.