The Moon is one celestial object that never fails to impress when seen in a telescope. It’s our nearest neighbor in space — big, bright, beautifully bleak, and just a quarter million miles away. That’s fewer miles than you may have ridden in cars, and 100 times closer than our next nearest major astronomical neighbor (Venus) ever gets. This makes the Moon a wonderful target for even the most humble astronomical instrument. You can spot and name at least a dozen of its surface features with the unaided eye. Binoculars show scores more, and a telescope can keep you busy on the Moon forever. Of course, just looking and not knowing what you’re seeing will grow old pretty fast. As in all of astronomy, the rewards come from recognizing and understanding what you find, and from planning neat things to seek out. Let’s get started with some moon facts.

Each month as the Moon circles the Earth, we see it go through its cycle of phases, one of the obvious moon facts. Starting from "new Moon," when it is nearly in our line of sight to the Sun, the Moon grows, or waxes, to a crescent, then to first quarter (half lit), gibbous (somewhat football-shaped), and full. Then the Moon wanes back through gibbous, last-quarter, and crescent phases to new again.

Near the terminator, the lunar landscape stands out in stark relief. Mountains, craters and valleys here look especially steep and rugged, because the low Sun makes every low hill cast a long, dramatic shadow. As you look away from the terminator onto the Moon’s day side, the surface appears smoother because it’s lit by a higher Sun that casts few shadows.

Additional Resources:
Why does the Moon pass through different phases?
Find the phase of the Moon tonight with our online tool!

The Moon’s biggest and most obvious features — visible even to the naked eye — are its large, flat, gray patches called maria (MAH-ree-a). This is the Latin plural of mare (MAH-ray), which means "sea." Early telescope users thought these markings might be similar to Earth’s bodies of water. In 1651, the Italian astronomer Giambattista Riccioli gave them fanciful names such as Mare Tranquillitatis (“Sea of Tranquillity”) and Oceanus Procellarum (“Ocean of Storms”), generally for the imagined astrological influences of the Moon’s phases on the weather.

Astronomers soon realized, however, that the Moon has no water — but the names stuck. In fact, the “seas” are ancient lava flows that flooded most of the Moon’s lowlands between 3.8 and 3.1 billion years ago. The Moon map here identifies the major maria. These are the Moon’s most important geographical features, and even the smallest binoculars are enough for learning them. Make a point of memorizing a couple more of their names each night, and soon the geography of this new world will become as familiar as the continents of Earth.

Getting to know the lunar surface is especially easy to do because the Moon always shows us the same face. It does so because, long ago, the Moon’s rotation period became locked to its orbital period around Earth. (Earth’s gravity got hold of the Moon’s most massive hemisphere and keeps it facing us all the time.) This “spin-orbit locking” is common among moons throughout the solar system. The downside of this situation is that we never get to see the Moon’s far side, unless we send spacecraft around back to look.

The Moon's most famous landforms, of course, are its craters. Practically all of these are the scars of titanic impacts by asteroids or comet heads. Most occurred more than 3.9 billion years ago during the “era of heavy bombardment” early in the solar system’s history.

Earth was bombarded just as heavily, but Earth’s wind, water, and geologic activity have erased almost all trace of its early craters. The Moon, on the other hand, is geologically dead. We see on the Moon a record of what happened in the extremely ancient past, right there in stark view.

The era of lava flooding that created the maria came later, so the maria bear fewer craters — only those caused by straggler asteroids and comets. In fact, your telescope will show many places around the edges of the maria where the lava partially flooded preexisting craters. Sometimes the flooding was so nearly complete that only a “ghost crater” remains. The Moon’s large bright areas — the lunar highlands — are the oldest terrain, as you can see from the thick cratering still preserved there.

Craters come in every possible size, from dozens or even hundreds of miles wide, down to tiny craterlets as small as your telescope can show, typically a mile or two across. You can often tell the sequence in which several craters formed by how they overlap. A large crater often shows a central peak — a mountainous pile created when the surface rebounded after a giant impact. Other big craters, sometimes called walled plains, have very flat bottoms because they became flooded with lava, like small maria.

The youngest craters are surrounded by bright rays that extend far across the surrounding landscape. These are great splashes of rock ejected by the impacts. Unlike most lunar features, rays are best seen when they are illuminated by a high Sun far from the terminator. At full Moon, bright rays from the large, young Tycho Crater (only about 110 million years old) can be seen extending far around the Moon’s face.

Among the Moon’s other features are mountain ranges and individual peaks. Canyon-like cracks, or rilles, are sometimes visible, especially around mare edges. Look carefully near the terminator, and you’ll see low wrinkle ridges winding across the maria.

How to Use a Moon Map

Every one of these moon facts and features takes on its own individuality and meaning if you know its name. To do that, you'll need a Moon map and a flashlight to read it by. Many astronomy books include Moon maps, or you can buy one on our online store. But you’ll need to know a trick or two to compare the map with what you see in the eyepiece — so read on with these moon facts and moon-viewing techniques.

Most maps show the Moon oriented more or less how you’ll see it with the unaided eye or binoculars: with its north side up. But here’s the tricky part. Many telescopes give an upside-down view, and many give a mirror-image view. Some telescopes do both. These two effects are entirely separate from each other, and you need to deal with them separately.

If you have a reflector telescope, or a refractor that you’re viewing “straight through” (in a straight line from end to end), you’ll see an ordinary, non-mirror image: a correct image. If you’re using a telescope where the eyepiece fits into a right-angle attachment (a star diagonal), a mirror image is probably what you’ll see. To check, aim the telescope at a billboard or street sign during the daytime. Twist your head around so the sign appears more or less right-side up, and you’ll see right away whether you’re looking at correct writing or mirror writing.

If you have a correct image, simply turn the Moon map around until its mare patterns match the patterns you see. (Never mind if the printing is upside down or at some weird angle.) You can now compare the map directly to the view in the telescope.

If you have a mirror image, you’ll have to mentally flip the Moon in your eyepiece right-for-left to match the Moon on paper. Alternatively, you can buy a mirror-image Moon map. Small maps like these identify only a few of the thousands of lunar features revealed in an amateur telescope.

The next step is Antonín Rükl’s larger Field Map of the Moon or — for true lunar enthusiasts — our highly detailed and beautiful Moon globe, a three-dimensional representation of the moon created with 15,000 actual images from NASA's Lunar Reconnaissance Orbiter.

And because you've read these moon facts so far, here's a special treat: NASA's animation of the entire 4.5-billion-year history of the moon boiled down into 2.6 minutes:

I am very impressed about this article on the moon,and the video is a great pointer. I have just started to study the heavens(I am 70) latte starter, but still get pleasure with my telescope. Alan makes it so interesting for any stage of the heavenly hobby. 10/10

I too watch the stars and wondered if you could spare me your findings so far. I would like to study the stars and hoping you have some info. Thank you! P.S I decided to name myself this because this comment is the only reason I here. 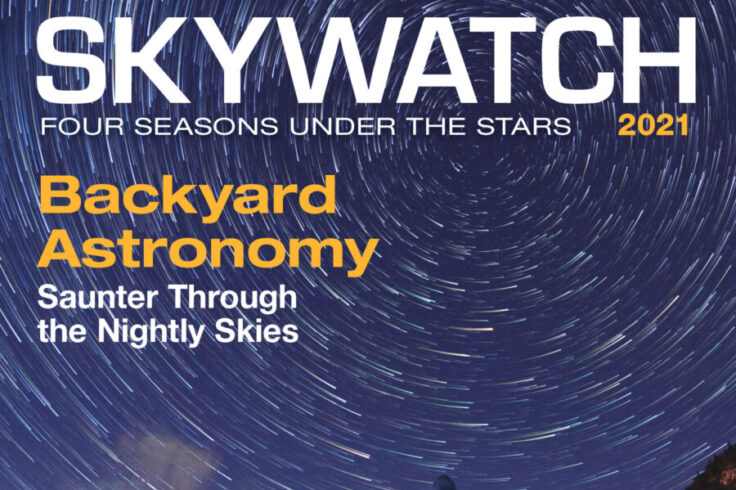 SkyWatch 2021 — Four Seasons Under the Stars

New Telescope? Learn How to Use a Telescope and See Amazing Sights

How to See All Six Apollo Moon Landing Sites