Viewing Mercury at Its Best 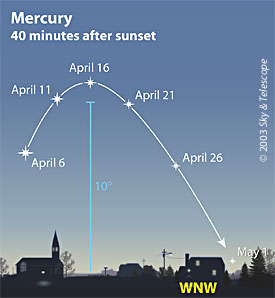 For observers in the Northern Hemisphere, April offers the best showing for Mercury all year. The planet is highest during twilight on April 16th; after that it appears to sink and fade rapidly.

Flowers aren't the only things coming up this April: the planet Mercury has climbed out of the twilight glow and right now is making its best showing for 2003. To find this often-elusive object, look low in the west-northwest about 45 minutes to an hour after sunset. Mercury will be sparkling and unmistakable; no other bright stars or planets are anywhere near it in that part of the sky.

Over the next few days Mercury's position will change rapidly and perceptibly from night to night against the starry background. Its brightness will change as well, fading from an easy-to-spot –0.1 magnitude on April 14th to a duller +1.1 (only one-third as bright) just a week later.

Watch Mercury go through its paces by using our interactive

The chart is set for April 16th at 40° north latitude, suitable for central North America. Click on the "change" button to alter either the date and time or viewing location displayed by the chart. To follow Mercury as it climbs and descends in the west during April, highlight the date (under "Date & Time"), and then click "+" or "-" to go forward or backward in time.

Usually hidden in the bright glow of twilight, Mercury often plays hide and seek with observers. The innermost planet zooms around the Sun in just 88 days, completing an orbit four times faster than Earth, which causes it to change position rapidly in the night sky. Peeping out from behind the Sun only six times a year — three times shortly before dawn in the east and three times shortly after dusk in the west — Mercury can be a real challenge to spot. 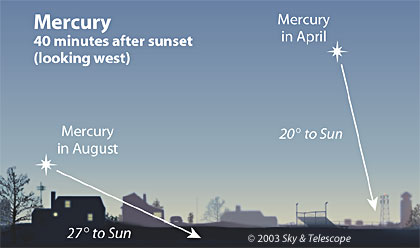 The visibility of Mercury in twilight depends both on its elongation (angular separation) from the Sun and its orbital plane's orientation in the sky. This week Mercury is sparklingly apparent in deep twilight 40 minutes after sunset (right). But in August (left), despite a greater elongation, the planet will be harder to spot.

The key is to look at the times of its greatest elongation, when the apparent angle between the planet and the Sun is largest. This angle can be as much as 28°, depending on orbital geometry. For example, Mercury's elongation peaks at 20° east of the Sun on April 16th. And because the planet's orbital plane is tilted steeply with respect to the horizon for northern observers, Mercury will linger relatively high in the sky after dusk. This August the elongation will be even greater, 27°, but as seen from north of the equator the orbital plane is angled less steeply Mercury will be harder to spot in the dark sky. The circumstances are reversed in the Southern Hemisphere, so the planet's appearance in August should be spectacular as seen from Johannesburg or Sydney.

When Mercury is west of the Sun, we see it near the eastern horizon before dawn. During 2003 the planet's best early-morning showing for Northern Hemisphere observers happens in late September.

Like neighboring Venus, Mercury mimics the phases of the Moon as it rounds the Sun. In order to see these phases, however, you'll need a telescope. Right now the planet's phase is thinning from fat and gibbous to a slender crescent. Unfortunately, even with a scope, surface features won't be visible. Still, Mercury's graceful arcing crescent makes it a worthwhile look. A telescope will also be essential for observing the planet on May 7th, when it transits (crosses the face of) the Sun. This event will be viewable for observers in Asia, Europe, Canada, and the eastern U.S.