Nothing symbolizes unreachable goals so much as a star. To astronomers, stars are inscrutable, featureless pinpoints that yield their secrets only indirectly. All stars, that is, but one: even a 3-inch refractor lays bare the dramatic detail on the face of the Sun. Learn how to safely look at the sun below. 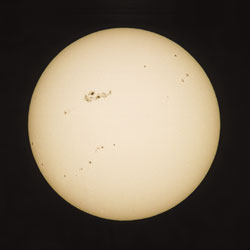 The face of the Sun in 2001 during sunspot maximum.

The Sun in a telescope is an awesome sight, a dynamic, living body, changing unpredictably from day to day. The Sun is also the only celestial object hazardous to the observer. Without proper protection, even a glimpse of it through a telescope or binoculars can burn the eye’s retina and leave a permanent blind spot.

There are two ways to look at the Sun safely: by direct viewing, with a proper filter over the front of the telescope, or by projecting the Sun’s image onto a piece of paper.

They protect the eye against both visible and invisible radiations and the telescope itself against heat. These aperture filters have made every other light-reducing device obsolete as far as the ordinary amateur is concerned.

Aperture filters come in two kinds. The most economical is made of metallized Mylar plastic, which usually turns the Sun blue. (Do not stretch the Mylar to remove wrinkles.) Metal-on-glass filters leave the Sun with a more natural tint, are more durable, and cost more.

In either case, the best filters have both sides of the Mylar or glass metallized allowing you to look at the sun. This keeps the inevitable tiny scratches and pinholes in a single coating from letting sunlight into the telescope, where it would reduce image contrast and possibly threaten the eye when you look at the sun. Hold the filter up to the Sun. If bright pinpoints show through, they should be touched out with opaque paint. If the flaws are many or large, the filter should be rejected.

Be sure to attach the filter securely to the front of the telescope so wind or a careless finger can’t dislodge it when you look at the Sun! 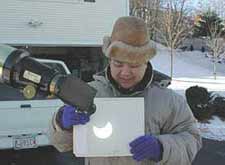 Sky & Telescope image archivist Imelda Joson shows how to safely view a partial eclipse of the Sun on Christmas day, 2000. She demonstrates the projection method of solar viewing by projecting the eyepiece image onto a white card.

The projection method is preferred by many solar observers — see "Sketching Sunspots" for an example of the method’s advantages.

For a quick first look at the sun by this technique, hold a white card or paper a foot or two behind the eyepiece of a telescope or a pair of binoculars on a tripod. The card must be shaded from direct sunlight. Focus until the Sun’s limb appears sharpest. Almost as much detail will be visible in the projected image as when the Sun is viewed directly through an aperture filter.

For more than a quick look at the sun, you’ll need a projection screen attached to the telescope to hold the paper. Such screens are sometimes supplied with small refractors. You can make your own (or better yet a projection box, to improve contrast by keeping daylight off the paper) by experimenting with cardboard, wooden dowels, bolts, and plywood. Plan the distance from eyepiece to screen to be 107d/(m – 1), where m is the telescope’s magnification and d is the diameter you want the Sun’s image to be. 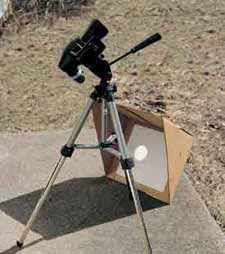 Small telescopes are especially suited to the solar-projection method. Seen here is a simple projection system made from a cardboard box with a piece of white paper as a projection surface. A surprising amount of detail on the solar surface can be seen.

When viewing the Sun via the projection method, follow these precautions for safe viewing:

One advantage of the projection method is that sunspot positions can be marked right on the paper. A circle is drawn in advance, the Sun’s image is fitted to it and focused, and a few touches of the pencil does the rest.

To record the orientation of such a drawing, mark the position of a sunspot, turn off the telescope’s drive and let the image drift, then mark the spot again; a line from the first dot to the second runs east to west. Nudge the instrument north; the Sun’s north edge is the trailing edge. Once a spot’s position is recorded, its solar latitude and longitude (heliographic coordinates) can be calculated using data from an astronomical almanac.

When examining the image, try flicking the paper rapidly back and forth. low-contrast detail that was lost in the paper’s surface irregularities will pop into view.

A close view of the large sunspot group visible in the solar image above.

Sunspots are cooler, relatively dark areas on the Sun’s bright surface (the photosphere). Most have a central dark umbra and a lighter gray penumbra. At high resolution the penumbra is seen to have thin fibrils radiating from the umbra. Only the smallest of sunspots, called pores, lack penumbras.

Spots tend to form in pairs, marking the “feet” of magnetic-field loops that arch above the surface. A pore appearing in a clear area is a sign that a spot group may soon be born. Pores often die out in a day or two, but sometimes one grows and develops a penumbra. More spots may appear nearby, and within about 10 days a complex active region is in full bloom, strung out between two major spots lined up east-west.

The eastern spot is usually the first to die out; the western one becomes round and smaller, sometimes persisting alone for weeks. The end of a sunspot is often signaled by a large light bridge, a finger of the photosphere that intrudes into the spot and appears to split it apart.

The Sun’s rotation quickly becomes evident with several sunspot drawings, allowing two weeks for a group to travel across the disk. Different regions of the Sun rotate at different rates. The synodic rotation period (apparent period as seen from the moving Earth) is 27¼ days at the Sun’s equator but about 30 days at solar latitude 40°. If you get a good run of daily drawings, you can align them and flip through the stack with your thumb to watch the Sun rotate in an animated cartoon.

A standard index of solar activity is the relative sunspot number. Naturally this number depends heavily on the instrument, seeing conditions, and on observer judgment. Standardized daily sunspot numbers range from zero on some days near the time of minimum activity to more than 200 near solar maximum. (For more on sunspot numbers, see S&T: November 1984, page 475.)

Solar limb darkening, where the edge of the Sun's disk is darker than the center, is another feature readily observed. Here is proof that the Sun has an atmosphere. At the center of the disk our vision extends straight down into a deeper, hotter layer of the photosphere, while near the limb our line of sight enters obliquely and penetrates only to a higher, cooler layer.

Often seen near the limb are faculae, large bright patches that near active areas. Faculae in an unspotted region mean either that spots will break out within about a day, or, more likely, that a spot group has died there sometime in the past few weeks. Keep an eye especially on the eastern limb. Faculae rotating into view often mean sunspots will follow. 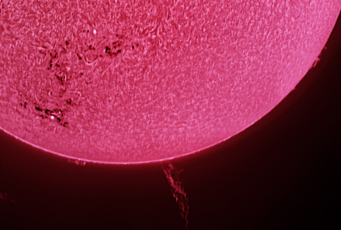 A prominence dances along the solar limb in this image through a solar H-alpha filter. Granulation is easily visible across the surface.

Granulation is visible only in excellent seeing with high power and at least a 4-inch aperture. Sometimes called rice grain or lemon peel, this textured appearance is due to hot gas continually boiling up to the Sun’s surface, cooling, and sinking down again. Each granule is a convection cell of upwelling gas about an arc second (500 miles) across and persisting 5 or 10 minutes.

A very rare but dramatic event is a white-light flare, a small but brilliantly incandescent eruption that lasts just a few minutes. Flares are believed to result from a sudden release of energy in the tangled magnetic fields above a sunspot group.

The first ever witnessed was in 1859 by the English solar observers Richard Carrington and Richard Hodgson. The latter described “a very brilliant star of light, much brighter than the Sun’s surface, most dazzling to the protected eye” that hugged the adjacent spot formations like “the edging of the clouds at sunset.”

Other rare sightings include dark faculae, which are occasionally reported toward the middle of the Sun’s disk, and ill-defined spots, sunspots that are unaccountably vaguer than normal ones visible at the same time. The nature and significance of these features remains obscure.

Follow the Sun’s many changes, become familiar with the habits of sunspots and the slow pulse of the solar cycle, and the time will come when every view will be filled with meaning.

The Solar Section of the Association of Lunar and Planetary Observers (ALPO) welcomes inquiries from novices as well as experienced observers. It also publishes a guide to making useful drawings and photographs.