Would you like to learn your way around the night sky in just 10 minutes? This month’s Sky Tour astronomy podcast helps you to navigate all across the late-spring sky like a stargazing veteran. No experience or equipment needed!

As told in this month’s Sky Tour, soon after sunset dazzling Venus hangs above the western horizon about a third of the way to overhead. This planet outshines all the others, and all the nighttime stars too. How soon after sunset can you pick it out as the twilight dims? Venus is going to sink dramatically this month. By the end of May it will be just a few degrees up at sunset, so enjoy it while you can.

Planet-wise, Venus has had the evening sky to itself for some time. But during May it’ll be joined by fast-moving Mercury. Knowing when to look for this little planet is always tricky, so our Sky Tour offers tips for viewing it. Mercury will be rising as Venus sinks, and on the evening of the 21st they’ll be just 1° apart.

The evening skies of May don’t feature any slam-dunk constellations like big, beefy Orion. But there is one obvious pattern that just about everyone knows: the Big Dipper. To find it, all you have to do is look up — way up. You should see the Big Dipper looming over you, with its curved handle bent upward and its four-sided bowl apparently overturned as if dumping soup into some imaginary pot.

Even though it’s so well known, the Big Dipper isn’t truly a constellation. It’s what astronomers call an asterism, which is simply any group of stars that make a pattern. The dipper is part of a larger constellation called Ursa Major, the Big Bear. Right now this woolly beast is on its back, with the stars in the Dipper’s handle serving as the bear’s tail, the bowl marking its back, and its head off to the left.

I think of the Big Dipper as the “Swiss Army Knife of the sky,” because it helps you find so many other key springtime stars. For starters, find the two stars at the left end, forming one side of the bowl. Skywatchers call these the Pointer stars, and here’s why. Draw an imaginary line through the pointers, and follow that line downward by the width of three fists. You’ll come to Polaris, the North Star. You can use this little trick anytime you want — just remember that those two stars Point to Polaris.

But wait, there’s more! To learn other ways to find your way using the Big Dipper, check out this month’s Sky Tour astronomy podcast!

You’ll have to get up pretty darn early, at least 45 minutes before the Sun, to spot the ongoing dance involving three planets before sunrise. Two of them are pretty obvious: Jupiter is almost due south as twilight begins, and somewhat dimmer Saturn is about a half fist to its left. Now slide your gaze eastward, about three fists farther left, and you’ll find Mars. The podcast tells you when to expect the waning Moon to glide through this part of the sky in mid-month, passing just below Jupiter and not far from Mars.

And if you find yourself up well before dawn early in the month, poke your head outside to catch one or two “shooting stars” from the annual Eta Aquariid meteor shower. Conditions aren’t great when this year’s show peaks on the morning of May 5th — but, hey, these are bits of debris shed by a Very Famous Comet. Which one? Well, listen to this month's Sky Tour to find out! 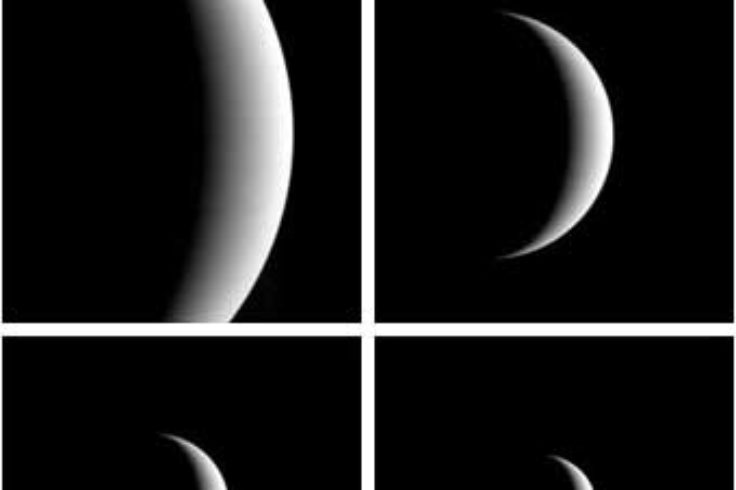