• Full Moon (exactly so at 7:33 p.m. EST). A very deep penumbral eclipse of the Moon happens  around sunset or in early evening for most of the Americas. See our article with timetable, February’s Deep Penumbral Lunar Eclipse, and the February Sky & Telescope, page 48.

Look for Regulus 6° or 7° to the Moon's lower left as darkness comes on for North America, as shown here. By midnight, Regulus is directly to the Moon's left.

• Now the Moon shines below Regulus and the Sickle of Leo after dark, as shown here.

• Zenith star: sometime around 7 or 8 p.m. (depending on how far east or west you live in your time zone), zero-magnitude Capella passes closest to your zenith. At almost the same minute, zero-magnitude Rigel, the leading foot of Orion, crosses the meridian due south.

• The sky's biggest asterism (informal star pattern) is the Winter Hexagon, filling the southern sky after dinnertime. Start with brilliant Sirius at the Hexagon's bottom. Going clockwise from there, march through Procyon, Pollux and Castor, Menkalinan and Capella nearly overhead, then down to Aldebaran, Rigel in Orion's foot, and back to Sirius. Betelgeuse sparkles inside the Hexagon, off center.

• The Moon rises around 9 or 10 p.m., with Jupiter following up below it 30 or 40 minutes later. Then only 10 or 15 minutes later, fainter Spica follows Jupiter (look to Jupiter's lower right). By dawn on the 15th the trio has moved over to the high southwest, as shown here.

• Orion is now high in the southeast at nightfall. Left of Orion's upper part is Gemini, headed by Castor and Pollux at far left. The stick-figure Twins are still lying on their sides. Well below their legs is bright Procyon in little Canis Minor: the doglet whose top is barely visible in profile in a dark sky. He's currently vertical. Procyon marks his rump.

• The inside of the Winter Triangle (Betelgeuse, Sirius, and Procyon) looks pretty empty. But of course it's not. It's full of dim Monoceros, the Unicorn, with the winter Milky Way and telescopic deep-sky sights — as told in Fred Schaaf's "Under The Stars" column in the February Sky & Telescope, page 45.

• By 9 p.m. or so, the Big Dipper stands on its handle in the northeast. In the northwest, Cassiopeia also stands on end at about the same height. As spring approaches, the Dipper will rise higher and Cassiopeia will move lower.

• Last-quarter Moon (exact at 2:33 p.m.). Before dawn on Sunday the 19th, look for it in the south-southeast. Antares and upper Scorpius are below and lower right of it. Saturn is farther to its lower left.

Mercury has sunk away deep into the glow of sunrise.

Venus dazzles high in the west-southwest during twilight, then lower in the west after dark until setting around 9 p.m.  Venus is at its peak brightness, magnitude –4.8, all February. Upper left of it, spot tiny orange Mars, only 0.4% as bright.

In a telescope Venus is a thick crescent. It's growing larger as it approaches us, now about 37 arcseconds from cusp to cusp. For the rest of the winter Venus will continue to enlarge as its phase wanes down to a super-thin crescent.

Venus in a telescope is least glary when viewed in bright twilight. So get your scope on it as soon as you can see it naked-eye, even before sunset.

Mars (magnitude +1.2) is the faint "star" upper left of Venus. They're 6° to 7° apart this week, starting to widen. In a telescope Mars is just a tiny fuzzblob 5 arcseconds wide.

Vesta, the brightest asteroid, is visible in binoculars at magnitude 6.8 as it moves through Gemini near Pollux and Castor. Article and finder chart.

Jupiter (magnitude –2.2, in Virgo) rises around 10 p.m. and blazes high in the south in the hours before dawn. Spica dangles 3½° lower right of it after they rise, and more directly below it before dawn. Jupiter is creamy white; Spica is an icier shade of white with a trace of blue (once it's fairly high).

In a telescope Jupiter is 40 arcseconds across its equator, on its way to 44 arcseconds in late March and April. It will reach opposition on April 7th.

Saturn (magnitude +0.5, in southern Ophiuchus) rises in the early morning hours and stands in the southeast before and during dawn. Redder Antares, magnitude +1.0, twinkles 17° to Saturn's right.

Uranus (magnitude 5.8, in Pisces) is still well up in the southwest right after dark, to the upper left of Venus and Mars. Finder chart showing its background stars.

Neptune is lost in evening twilight.

"Objective reality exists. Facts are often determinable. Science and reason are no political conspiracy; they are how we discover objective reality. Civilization's survival depends on our ability, and willingness, to do this."
— Alan MacRobert, your Sky at a Glance editor

March For Science on April 22nd, to “champion publicly funded and publicly communicated science as a pillar of human freedom and prosperity.” 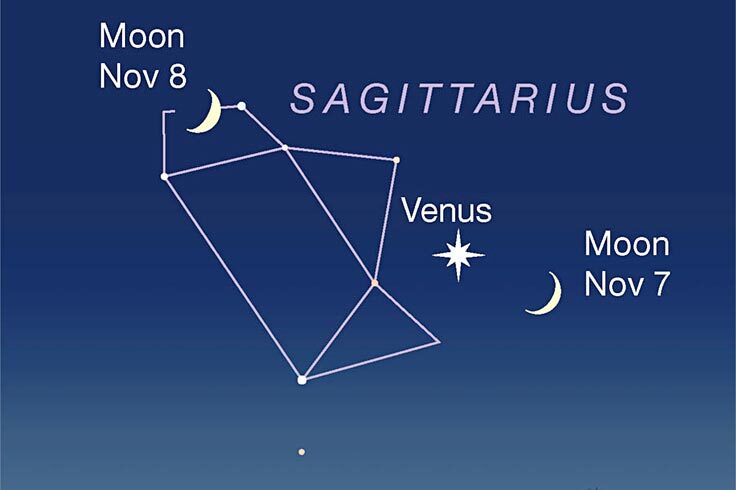 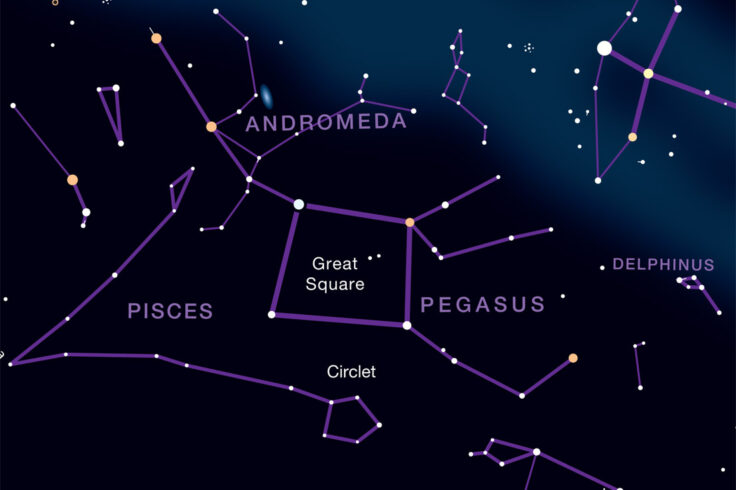 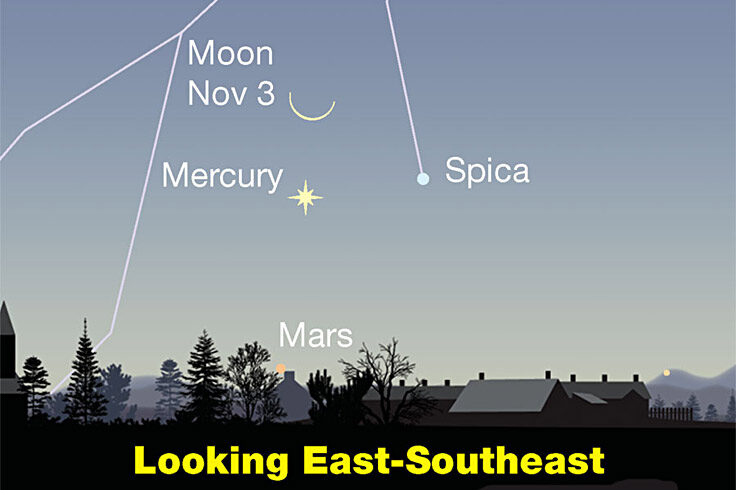