• Before dawn on Saturday morning the 6th, spot bright Jupiter in the south-southeast. Fainter Mars is barely to its right, by just 1/3° — less than the width of a chopstick at arm’s length. The two planets will fit in a medium-power telescopic view, but both are near their maximum distances from Earth and about as small as they ever look. Mars is especially tiny.

• Before dawn on Sunday the 7th, again spot bright Jupiter in the south-southeast. Mars is now 1/3° below it (at the times of dawn for North America). To their right is 3rd-magnitude Alpha (α) Librae, a very wide double star for binoculars.

• The Northern Cross in Cygnus, with Deneb at its top, plants itself nearly upright on the northwest horizon around 7 or 8 p.m. at this time of year.

By the time dawn begins to brighten on Tuesday the 9th they're all high in the south, and the line they form is more nearly vertical.

• After dinnertime now, the enormous Andromeda-Pegasus complex runs from near the zenith down toward the western horizon.

• Both Venus and Pluto pass through conjunction with the Sun today, just 3 hours apart (although they're 1.6° apart on the sky).

• Before dawn on Thursday morning the 11th, spot the waning crescent Moon in the southeast with Jupiter and fainter Mars to its lower right.

• After dinnertime at this coldest time of the year (on average, for many places), the dim Little Dipper hangs straight down from Polaris, the end of its long handle — as if from a nail on the cold north wall of the sky. In warm June, by contrast, the Little Dipper's bowl floats up from Polaris, like a helium balloon escaped from a summer party, trailing its string.

• In the early dawn of Friday the 12th, the waning crescent Moon hangs to the lower left of Jupiter and Mars. It's above Antares by a fairly similar distance.

Very far to their lower left, near the southeast horizon, use binoculars to help find Mercury and Saturn as dawn brightens. They're only about 1° apart. Mercury, on the right, is the brighter of the two.

• Sirius, the Dog Star, rises in the east-southeast around the end of twilight now, if you're near latitude 40° north (New York, Denver, Madrid, Athens). From such latitudes, Procyon — 2½ fists at arm's length to Sirius's left — precedes it up; "Procyon" is from the ancient Greek for "before the dog."

But if you're as far south as San Diego, the Gulf Coast, Jacksonville, or Cairo, Egypt, they rise almost at the same time.

• In early dawn of Saturday the 13th, the waning crescent Moon hangs far to the lower left of Jupiter and Mars and upper left of Antares.

Far lower left of the Moon, near the southeast horizon, use binoculars to help find Mercury and Saturn as dawn brightens. They're still roughly 1° apart, but now Mercury is below Saturn.

• Vega still twinkles quite low in the northwest after dusk. It’s sometimes called the Summer Star, but it’s certainly out of season now. It’ll soon be gone, to return to the evening sky next spring.

Mercury (magnitude –0.3) is having a fine morning apparition. Look for it low in the southeast in early dawn, very far lower left of Jupiter and Mars. (Don't confuse Mercury with twinklier Antares, which is about 15° or 20° to Mercury's upper right.)

Venus remains hidden in conjunction with the Sun.

Mars and Jupiter (magnitudes +1.5, and –1.8, respectively) rise in the east-southeast around 3 a.m. and are high in the south-southeast by early dawn. Jupiter is the brightest point in the sky. Mars and Jupiter begin the week in a close conjunction, just 0.3° apart on the mornings of January 6th and 7th. Then Jupiter pulls away to the upper right, widening their separation to 3° by January 13th.

Saturn (magnitude +0.5) begins the week very deep in the dawn, 8° lower left of brighter Mercury on the morning of the 6th. But they close in on each other by more than 1° per day, and are only about 3/4° apart (for North America) on their morning of conjunction, January 13th.

Uranus (magnitude 5.8, in Pisces) and Neptune (magnitude 7.9, in Aquarius) are best hunted right after dark — when Uranus is high in the south and Neptune hasn't yet sunk too low in the southwest. Use our finder charts online or in the October Sky & Telescope, page 50.

"Objective reality exists. Facts are often determinable. Vaccines save lives. Carbon dioxide warms the globe. Bacteria evolve to thwart antibiotics, because evolution. Science and reason are not fake news, not a liberal conspiracy. Civilization's survival depends on our ability, and willingness, to use them."
— Alan MacRobert, your Sky at a Glance editor 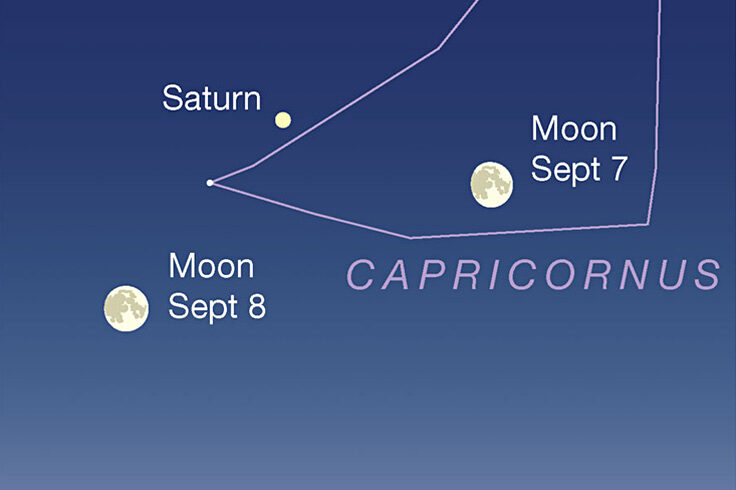