• The Moon, Jupiter, and Spica form a gently curving arc in the southwest this evening.

• You may know the naked-eye Head of Serpens asterism, but what about the binocular Serpent's Fang jutting to its west? It's rich in optical double stars for binoculars — as Matt Wedel describes in his Binocular Highlight column and chart in the June Sky & Telescope, page 43.

• Jupiter is the bright "star" with the Moon, as seen at right. They're only a couple degrees apart as viewed at dusk from North America. But Jupiter this evening is 1,860 times farther away.

• Lower left of them is Spica. Much closer to them in the opposite direction is fainter Gamma (γ) Virginis, a close double star for telescopes (separation 2.6 arcseconds this year).

• And, a double shadow-transit occurs on Jupiter tonight. From 10:22 p.m. to 12:22 a.m. EDT, both Io and larger Ganymede are casting their tiny black shadows onto Jupiter's face.

• And then, Jupiter's Great Red Spot transits the planet's central meridian around 12:55 a.m. EDT (9:55 p.m. PDT). Quite a telescopic night for this little group of objects.

• Now the Moon stands closer to Spica than to Jupiter.

• Arcturus shines 30° to the upper left of Jupiter after dark. The brightest star in the northeast, very far lower left from Arcturus, is Vega. Look a third of the way from Arcturus to Vega for the delicate semicircle of Corona Borealis, the Northern Crown, with its brighter gem star Alphecca.

Two thirds of the way from Arcturus to Vega is the dim Keystone of Hercules.

• Do you sometimes like to watch the stars come out, one by one and then in great numbers? After sunset this evening, how soon you can spot Jupiter, the brightest point of all? It's about 25° (2½ fist-widths at arm's length) upper right of the Moon, as seen in twilight for North America.

Next, watch for Arcturus to appear 30° above the Moon.

And then comes Spica. Find the midpoint between the Moon and Jupiter, and watch just below or lower right of there for Spica to appear.

• After dark, Vega is the brightest star very high in the east. Just a little lower left of it is 4th-magnitude Epsilon Lyrae, the Double-Double. Epsilon forms one corner of a roughly equilateral triangle with Vega and Zeta Lyrae. The triangle is less than 2° on a side, hardly the width of your thumb at arm's length.

Zeta Lyrae is also a double star for binoculars; much tougher, but plainly resolved in any telescope.

Delta Lyrae, below Zeta, is a much wider and easier pair.

• With June well under way, the Big Dipper has swung around to hang down by its handle high in the northwest during evening. The middle star of its handle is Mizar, with tiny little Alcor right next to it. On which side of Mizar should you look for Alcor? As always, on the side toward Vega! Which is now shining in the east-northeast.

• The Moon after dark forms a neat triangle with Antares to its lower right and Saturn to its lower left. Watch the triangle rotate clockwise as it crosses the sky through the night.

• As twilight deepens, look for Saturn just a few degrees to the right of the just-past-full Moon. Watch the Moon pull a little farther from Saturn as the hours pass.

• With summer just 11 days away, the Summer Triangle stands high and proud in the east after dark. Its top star is bright Vega. Deneb is the brightest star to Vega's lower left (by 2 or 3 fists at arm's length). Look for Altair a greater distance to Vega's lower right.

Mercury (about magnitude –0.6) is very deep in the glow of sunrise, sinking deeper each day. Early in the week, try to find it almost 30° lower left of Venus as shown here. Bring binoculars.

Venus (magnitude –4.4) shines in the east during dawn. A telescope shows it very close to dichotomy (half-lit phase).

Jupiter (magnitude –2.2, in Virgo) shines high and bright in the south to southwest during evening. No other point in the evening sky is so bright. Spica, magnitude +1.0 and noticeably bluer, glitters 11° left or lower left of it. In a telescope, Jupiter has shrunk to 40 arcseconds wide.

Saturn (magnitude +0.1, at the Ophiuchus-Sagittarius border) glows low in the southeast at nightfall. It's 16° left or lower left of twinklier Antares. Not until after midnight is Saturn highest in the south. It will reach opposition on the night of June 14th.

Uranus (magnitude 5.9, in Pisces) is low in the glow of dawn, in the vicinity of Venus this week.

Neptune (magnitude 7.9, in Aquarius) is up in the southeast before the first light of dawn.

Last night was the first night I was able to see Antares over a high tree line before 10pm. Always love the first sighting of my favorite star! Summer is here!! Hoping for many nights of clear skies for everyone! I especially love Scorpius when it's paired with a planet, so I'm excited to see Saturn nearby.

You accidentally used image of Sagittarius for "Week at a Glance" entry point, but inside the article you correctly show Moon and Jupiter moving through Virgo. Just thought I'd point that out! Otherwise, keep up the great work!

The image of Sagittarius is just the logo for the Week at a Glance column - check in every week for what's up in the sky tonight. 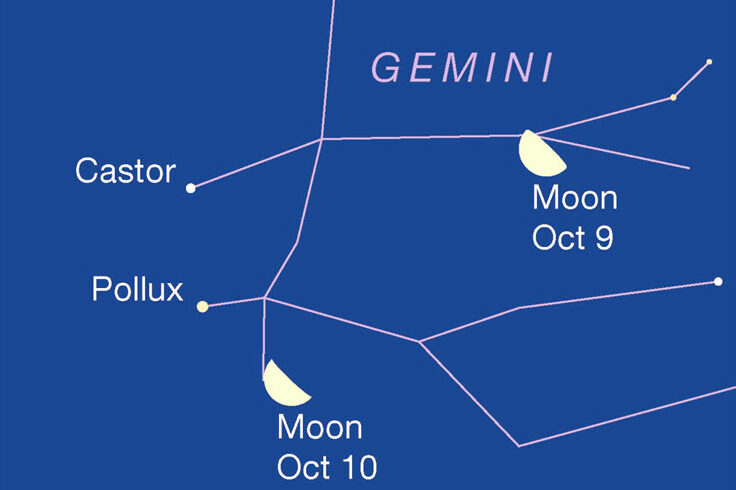