Supernova for amateur scopes in a northern galaxy. On May 14th amateur Patrick Wiggins discovered a fresh supernova at magnitude 12.8 in NGC 6946, a showpiece galaxy at the Cepheus-Cygnus border. Story and charts: Bright Supernova Discovered in ‘Fireworks Galaxy’ NGC 6946. Update May 26th: Supernova 2017eaw, as it's now named, brightened by just 0.2 magnitude in the next three days, leveled off, and now is starting to fade slightly.

• With the Moon gone from the evening sky, can you see the big Coma Berenices star cluster? Does your light pollution really hide it, or do you just not know exactly where to look? It's 2/5 of the way from Denebola (Leo's tail) to the end of the Big Dipper's handle (Ursa Major's tail).

The cluster's brightest members form an inverted Y. The whole group Is about 5° wide — a big, dim glow to the unaided eye when seen in a dark sky. It nearly fills a binocular view.

• With summer still a month away (astronomically speaking), the last star of the Summer Triangle rises above the eastern horizon around 10 or 11 p.m. That's Altair, the Triangle's lower right corner. The highest and brightest corner is Vega. The third star is Deneb, less far to Vega's lower left.

• Arcturus, 30° to the upper left of Jupiter after dusk this week, is the second-brightest point of light on the southern side of the sky. The brightest star in the northeast is Vega.

Look a third of the way from Arcturus to Vega for the delicate semicircle of Corona Borealis, the Northern Crown, with its brighter gem star Alphecca.

Two thirds of the way from Arcturus to Vega is the dim Keystone of Hercules.

• Telescope challenge: Catch the fast-pulsing star VX Herculis, an old RR-Lyrae-type variable, rising from 11th to 10th magnitude tonight in the course of about an hour (roughly 3:30 May 22nd UT). See our article, comparison-star chart, and timetable in the June Sky & Telescope, page 48.

• Look east in early dawn Tuesday morning for Venus with the waning crescent Moon, as shown above. And can you make out Mercury yet? (In these scenes, the Moon is always shown three times its actual apparent size.)

• Jupiter stands smack on the meridian (i.e. due south) in late twilight this week. Twilight can be an excellent time for observing a planet telescopically. Most of them are bright enough to show all the detail that your scope can resolve even through the deep blue of late twilight, when the planet's glare will be less dazzling. And in bright twilight after sunset or before sunrise, the atmospheric seeing sometimes steadies down markedly.

That also makes this a good time to observe the binary star Gamma Virginis, now just 3½° to Jupiter's upper right. The pair's separation this season is a pretty easy 2.6 arcseconds.

• Summer Milky Way preview: For much of every spring at mid-northern latitudes, the Milky Way lies right down all around the horizon after dark, completely out of sight. But as evening grows late, watch low in the east to northeast. There the rich Cygnus stretch of the Milky Way now starts rising into view by around 10 or 11 p.m.  It will rise earlier and higher every week.

• A double shadow transit on Jupiter is visible tonight from 10:47 p.m. to 12:19 a.m. Pacific Daylight Time, when both Io and Europa are casting their slightly unequal little shadows onto the planet.

• While twilight is still bright, can you catch the thin crescent Moon just above the west-northwest horizon about to set? The Moon is only about 1 1/4 days after new as seen at the time of dusk for North America; see the time of new Moon yesterday above. And how about little Mars to its upper right?

• The thickening crescent Moon, now below the heads of the Gemini twins, shines near Gamma (γ) Geminorum: the brightest star in the twins' feet.

Meanwhile, far to the Moon's lower right, Mars is passing between the horn-tips of Taurus (Beta and Zeta Tauri, magnitudes 1.6 and 3.0). The three form a diagonal line 8° long from upper right to lower left. Binoculars will help!

Mercury (about magnitude +0.2) is deep in the glow of sunrise, even though is was at greatest elongation on May 17th. Look for it about 20° lower left of Venus. If you spot Mercury, you've succeeded in seeing it during its poorest apparition of the year!

Venus (magnitude –4.6) shines low in the east as dawn brightens. In a telescope, it's a very thick crescent nearing dichotomy.

Mars (magnitude +1.7, in Taurus) glimmers very low in evening twilight. Look for it just above the west-northwest horizon, 22° (two fists at arm's length) lower left of Capella. Mars passes between the horn-tips of Taurus (Beta and Zeta Tauri, magnitudes 1.6 and 3.0) on May 27th. The three will form a diagonal line 8° long from upper right to lower left. Binoculars will help.

Jupiter (magnitude –2.3, in Virgo) glares high and bright in the southern sky during evening. No other point is nearly so bright. Spica, noticeably bluer, glitters 11° lower left of it. In a telescope, Jupiter is starting to shrink as Earth pulls ahead of it in our faster orbit around the Sun. It appears 42 arcseconds wide this week.

Saturn (magnitude +0.1, at the Ophiuchus-Sagittarius border) rises around the end of twilight and glows highest in the south in the early-morning hours. Redder Antares (magnitude +1.0) twinkles 17° to Saturn's right or lower right. Saturn will reach opposition on the night of June 14th.

Uranus (magnitude 5.9, in Pisces) is still hidden in the glow of dawn.

Neptune (magnitude 7.9, in Aquarius) is low in the east-southeast before the first light of dawn. 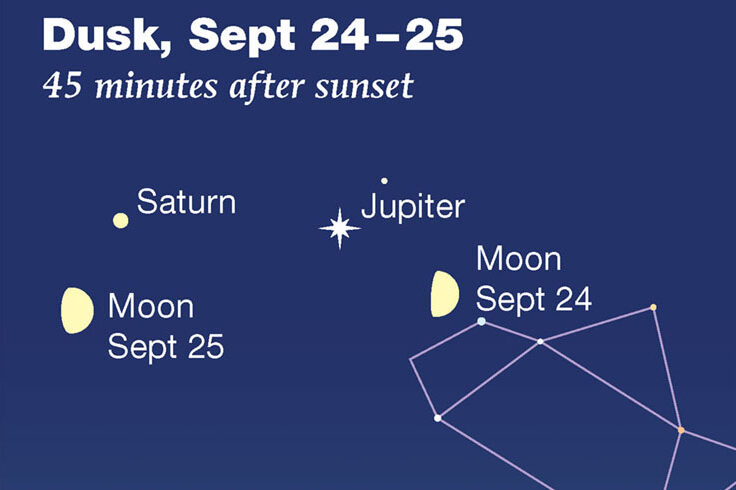