Last Wednesday a white-dwarf star erupted in the constellation Delphinus, producing the brightest nova since 2007. Currently shining at magnitude 4.9, the nova is visible to the naked eye from dark locations far from city lights, and might remain so for weeks to come. 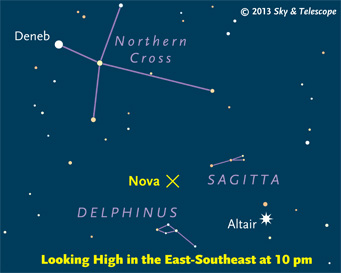 Sky & Telescope sky chart showing the location of the newly discovered nova. Click on the image for a print-resolution file. Click here for a negative black-on-white version.

“The nova is easy to locate north of the lovely star pattern of Delphinus. And the constellation Sagitta, the Arrow, points right toward it,” says Tony Flanders, associate editor of Sky & Telescope and host of S&T’s PBS TV show SkyWeek.

“A second advantage is the nova's location. It’s easily visible in the eastern sky in the early evening, so it can be followed for many hours. This means that amateur skygazers and professional scientists alike can continue monitoring it for months to come,” adds Arne Henden, director of the American Association of Variable Star Observers (AAVSO). “The nova can be seen with binoculars even from light-polluted metropolitan areas. Hundreds of observers, many for the first time, have submitted brightness estimates of the nova to the AAVSO.”

Nova Delphini 2013 was discovered by Koichi Itagaki of Yamagata, Japan, in an image taken at 14 hours Universal Time (2 p.m. EDT) on August 14th. It was not present in a photo that he took the previous day. The star was apparently 17th magnitude before erupting, so it brightened roughly 100,000-fold to its peak of magnitude 4.5 on August 16th. The nova declined slightly after that, but has held remarkably steady at magnitude 4.9 for the past three days.

“As for what it will do in the days ahead, your guess is as good as mine! It could remain at this brightness for many more days, it could rebrighten, or it could fade rapidly. That is what’s fun about novae,” says Henden.

A classical nova occurs in a special kind of tightly orbiting binary star system: one where a relatively normal star pours a stream of hydrogen onto the surface of a companion white dwarf. When the layer of fresh hydrogen on the white dwarf's surface grows thick and dense enough, the bottom of the layer explodes in a runaway hydrogen-fusion reaction — a hydrogen bomb in the shape of a thin shell roughly the size of Earth. The underlying white dwarf remains intact, and as new hydrogen builds up, the process may repeat in a few years to tens of thousands of years.

“Nova Delphini 2013 is among the 30 brightest novae ever recorded,” says S&T editor in chief Robert Naeye. “It’s a wonderful target for backyard observers, given that it’s visible to the naked eye and relatively easy to find. But it’s also attracting the intense interest of scientists, who are using a wide assortment of telescopes and astronomical satellites to better understand these enigmatic explosions.”

For more information, a star map, images, and discussion, visit http://skypub.com/novadel and http://www.aavso.org/nova-del-2013.

For more skywatching information and astronomy news, visit SkyandTelescope.com or pick up Sky & Telescope, the essential guide to astronomy since 1941 with subscribers in more than 100 nations.

The American Association of Variable Star Observers is an international organization of amateur and professional astronomers with the common interest of studying variable stars. It provides finding charts, observation archives, forums, software, collaborative opportunities, tutorials, and workshops regarding this field of astronomy.

Sky Publishing (a New Track Media company) was founded in 1941 by Charles A. Federer Jr. and Helen Spence Federer, the original editors of Sky & Telescope magazine. In addition to Sky & Telescope and SkyandTelescope.com, the company publishes two annuals (Beautiful Universe and SkyWatch), as well as books, star atlases, posters, prints, globes, and other fine astronomy products found in our online ShopAtSky store.