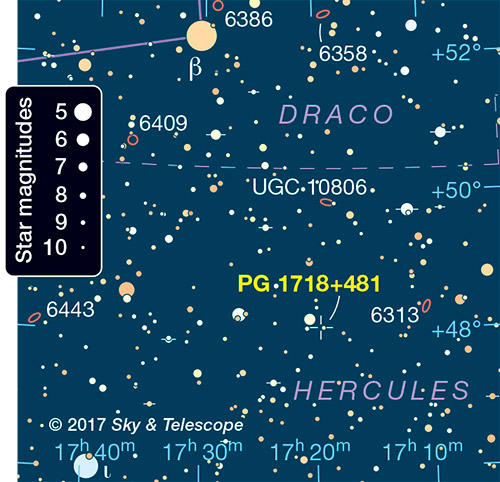 Three classes of active galactic nuclei (AGN) are discussed in Al Lamperti’s article “Ancient Photons from AGNs” that appears in the March 2018 issue of the magazine: Seyfert galaxies, BL Lacertae objects, and quasars. AGNs are extremely energetic objects powered by supermassive black holes, and lie at vast distances. Of the nine targets discussed in the article (3 Seyferts, 2 BL Lac objects, and 5 quasars), the closest one lies at 43 million light-years while the farthest is at a whopping 11 billion light-years.

When you set out to observe these sources, I would urge you to do as the author suggests: Write down the distances of these AGNs as you start your observing session, and after you have seen these objects with your own eyes in your eyepiece, take another look at the number you wrote down … and marvel at the fact that you are seeing photons that have traveled through space for billions of years. In some cases, these photons embarked on their journey only a few billion years after the Big Bang.