Inside the April 2017 Issue 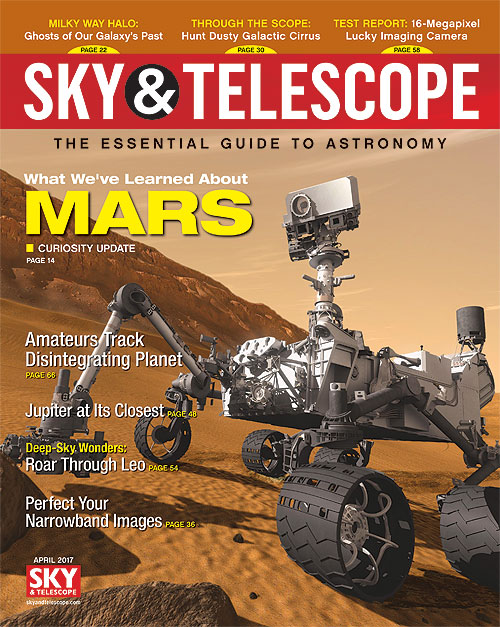 Exploring the Past: Curiosity's Geology, Stellar Spirits, and Dusty Wraiths

It has been almost five years since Curiosity landed on Mars, and boy look at how far the intrepid rover has come! Contributing Editor Emily Lakdawalla takes us along for the journey through valleys, around dunes and hills, and on up toward Mount Sharp as Curiosity continues to uncover evidence of a more habitable history on the Red Planet. S&T editor Monica Young takes a deeper look at our galaxy's past with the aid of galactic ghosts — stellar streams that are all that remain from dwarf galaxies that have been torn to shreds in the Milky Way's gravity well. And don't miss the opportunity to take another step back into years gone by with the rediscovery of Herschel's ghosts, an ethereal phenomenon visible from your backyard telescope. Plus, find viewing advice for Jupiter at opposition, double-rimmed lunar craters, deep-sky targets in Leo, and much more.

Curiosity's Discoveries on Mars
After four Earth years on the Red Planet, the intrepid rover has found evidence of long-gone water and habitable environments.
By Emily Lakdawalla

Spirits of Our Galaxy's Past
Ephemeral streams of stars are helping astronomers probe our galaxy's dark matter halo and its history.
By Monica Young

Herschel's Ghosts
With the right small scope, you can track down these dusty wraiths first observed in the late 18th century.
By Mel Bartels

Narrowband Color in PixInsight
Create your own colorful nebulae images with this helpful technique.
By Warren A. Keller

Amateurs Track a Disintegrating Planet
As we watch, a world that came too close to its dead star is falling to pieces
By Mario Motta

Stellar Streams in Galaxy Halos (A Gallery)
Streams of stars abound in the Milky Way halo, as discussed in the April 2017 issue of Sky & Telescope. We showcase here additional stunning images to illustrate the elusive nature of these galactic ghosts.

A Modern Standing-Stone Calendar
Learn more about Russ Erganbright's story on the creation of a modern-day Stonehenge.

A Fix for Sky & Telescope's DVDs and CDs with Adobe Flash
It has come to the attention of our staff that some users have had problems lately accessing data on Sky & Telescope products on DVDs/CDs that use the Adobe Flash player. While there is nothing wrong with the products themselves, the problem seems to be caused by a recent update to the Flash player, and it can be fixed by making a small adjustment.

Mercury Maxes Out
The tiny planet climbs to its highest altitude of the year in April, while Jupiter reaches opposition.
By Fred Schaaf

The Curious Case of Concentric Craters
Why do some small lunar craters display a remarkable ring-and-rim structure? Researchers might finally have the answer.
By Charles Wood

The Lion-Guarded Gate
You'll need to brave a ferocious beast to find these deep-sky treasures in Leo.
By Sue French