Inside the February 2018 Issue 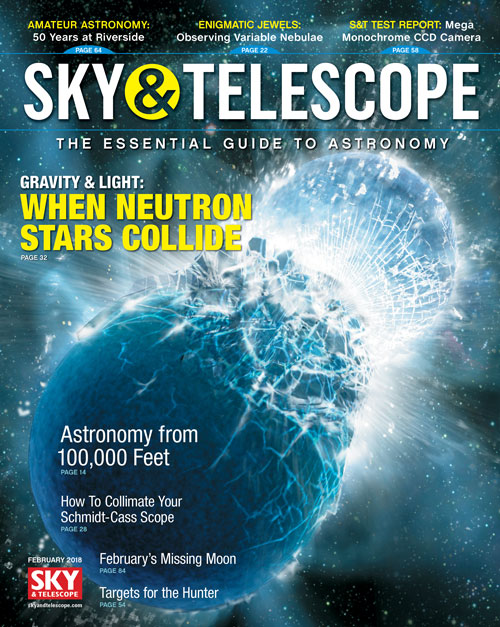 This issue covers one of the most astounding discoveries of modern astronomy — the detection of gravitational waves from colliding neutron stars AND corresponding detections in the electromagnetic spectrum. Also learn how taking to the stratosphere in a balloon changed astronomy starting in the late 1800s and advancing to Hubble-level imagery in the future. Explore the mysteries and histories of inconstant nebulae. Learn how to improve viewing through a Schmidt-Cassegrain by collimating it in a few easy steps with only one tool and a bright star. In this issue, we also take a look back on the rich history of Riverside Telescope Maker's Conference-Astronomy Expo before its 50th anniversary this May. Check out our observing picks for the month, including early morning planets, Orion's treasures, sites of water on the Moon, and more! Enjoy these and other stories in the February 2018 issue of Sky & Telescope.

Science in the Stratosphere
Balloon-borne instruments give astronomers a taste of space without the need for rockets or satellites.
By Laura Fissel

The Inconstancy of Nebulae
Variable nebulae have intrigued observers for centuries. Grab your telescope and see if you can spot any changes.
By Ted Forte

Collimating a Schmidt-Cassegrain
Follow these steps to get your telescope into perfect alignment.
By Rod Mollise

When Neutron Stars Collide
After decades of hard work, astronomers have caught their first spacetime ripples from the smash-up of two dead stars.
By Govert Schilling

Balloon Astronomy: From Launch to Landing
Watch astronomical balloons in action: see launches from the ground, take in the stunning views from the balloon itself via GoPro cameras, and watch NASA's short documentary on how the space agency is conquering the stratosphere.

Ice Giants: Neptune and Uranus
Read the history of the discoveries of Uranus and Neptune and learn how to observe them. Includes finder charts good through March 2018.

ʻOumuamua
Read the original report (read all the updates, too!) on our interstellar visitor, as highlighted in this month's Spectrum.

The Great Overdog
Sirius isn't the only star that shines brightly in Canis Major.
By Fred Schaaf

Fast Times in the Charioteer
AE Aurigae may appear modest, but it's really a troubled, hot star, trying to outrun its past.
By S. N. Johnson-Roehr

Dry No More
Look closely, and you can spot places where water exists on the lunar surface.
By Charles Wood

Winter's Mighty Hunter
Look to Orion, the embodiment of the season's night sky, to discover a diverse collection of celestial wonders.
By Sue French