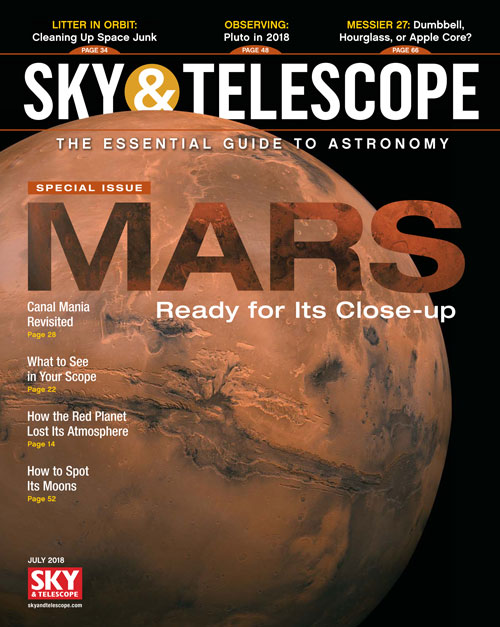 Mars: Ready for Its Close-Up

In the July 2018 special issue of Sky & Telescope, explore Mars, past, present, and future. Learn about the science MAVEN is doing to understand how the once liquid water-supporting Mars lost its atmosphere. Mars will be at its biggest and brightest this July — discover recommendations of what features to observe and what filters could help you on your quest. Dive in to the history of Mars' canal mania — why might Percival Lowell have thought the canali were built by an intelligent civilization? Plus, read about how scientists and engineers are tackling the problem of "space junk". Get observing tips for hunting Phobos and Deimos. Then, explore the complex planetary nebula M27 with the help of detailed sketches. In this issue, we also share our test report on a high-tech polar alignment camera and software. Check out our observing picks for the month, catch Pluto if you can, and spot the season's top ten globulars! Enjoy these and other stories in the July 2018 issue of Sky & Telescope.

Mars the Mighty Returns
Wonder what to see now that the Red Planet is at its biggest and brightest? Read on for the best tips.
By Bob King

Litter in Orbit: How to Clean Up Space Junk
Thousands of pieces of debris orbit Earth, and it's going to take a coordinated effort to solve the problem.
By Jonathan McDowell

Messier 27: The First Planetary Nebula
Explore this complex object through your telescope with the help of an experienced observer's ever-so-elaborate sketches.
By Howard Banich

Meet Steve, Your Friendly Neighborhood Aurora
The story of Steve, the mysterious pink-ribbon aurora, shows how citizen scientists are making important contributions to research and discovery.

Uranus and Neptune
Some history on the ice giants with handy finder charts at the end.

Download Maximal Elongations Table
While you're observing Mars, check out its moons Phobos and Deimos at their maximal elongations using this handy table.

All My Mars at Once
The author shares a lifetime of encounters with the Red Planet.
By Fred Schaaf

Mars and Its Supporting Cast
July is all about Mars, but the other planets put on a pretty good show, too.
By Fred Schaaf

Hunting Phobos and Deimos
Spitting these diminutive moons is a daunting challenge for dedicated observers.
By Thomas A. Dobbins

The Season's Top 10 Globulars
Even small scopes can track down these striking summer star balls.
By Sue French