Inside the November 2019 Issue 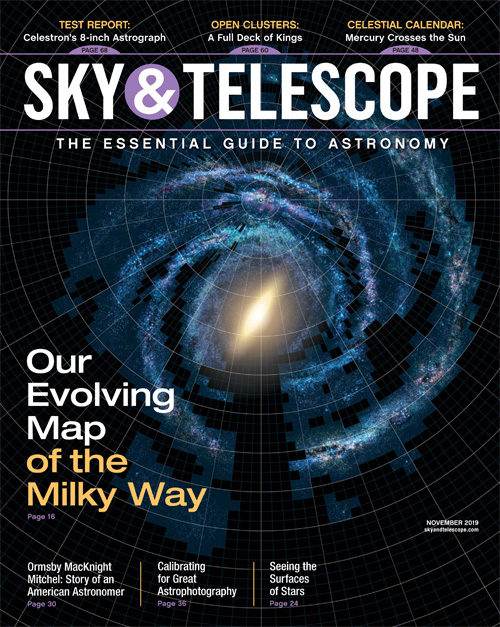 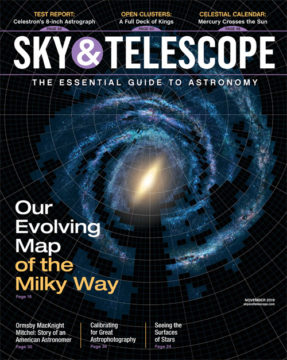 In November's issue of Sky & Telescope, take a tour of the evolving map of the Milky Way. Until the middle of the 20th century, we didn't even know we lived in a spiral galaxy. Now, as described in our cover story, astronomers have established that we live in one of the largest, and arguably most beautiful galaxies. Innovative techniques have led to the astounding results described in a second article on how we're imaging the surfaces of stars. For most of history, and still for most of us, any star other than the Sun has been a mere pinprick of light. But new instruments are enabling astronomers to actually resolve stellar surfaces. Soon we'll be seeing a spot on our own star's surface when Mercury transits the Sun on November 11th. You'll need a telescope to see this historic event. Even without a telescope, though, November offers evening and morning planet showings. Or, if you have a telescope and are ready for a challenge, Dave Tosteson shows you how to see the farthest star visible from Earth. Plus, see Veil Nebula sights, find Neptune and Uranus, and learn about the man who was the Carl Sagan of the 19th century.

Seeing Stars
Astronomers are linking arrays of telescopes together to reveal the long-hidden visages of faraway suns.
By Christopher Crockett

A Full Deck of Kings
Open clusters can be pleasing to behold but tend to be elusive. Join the authors on their foray into the world of King open clusters.
By Al Lamperti & Frank Colosimo

How to See the Transit of Mercury
Use a low-tech solar projector to see the innermost planet cross the face of the Sun.

View the King Clusters
We provide a table of data on the 27 King clusters discussed in the November issue.

Hubble Constant Tension
Read the full story of the ongoing debate about the true current expansion rate of the universe.

A Transit and a Close Conjunction
The big event this month is the passage of Mercury across the face of the Sun, but the other planets put on a fine show, too.
By Fred Schaaf

Transit of Mercury
The mighty mite of planets gets between us and our star this month.
By S. N. Johnson-Roehr

Monitoring the Sun with Neptune
A long campaign to measure the variability of our star produced unexpected results.
By William Sheehan

Come the Night
Explore the sky northeast of the Veil Nebula.
By Sue French