Inside the October 2016 Issue 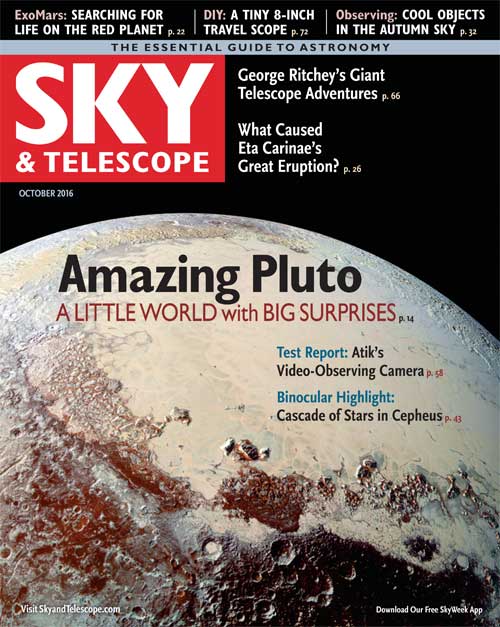 New Horizons' flight past Pluto last year revealed a stunning world we couldn't have dreamed up — now scientists are sifting through the data, trying to make sense of this frozen wonderland. A little closer to home, ExoMars is due to arrive at the Red Planet by September. It will be the first probe to carry instruments specifically designed to search for signs of life on a world that still holds its own fair share of secrets. And a bit farther afield (7,500 light-years or so from Earth), astronomers are finally beginning to get a handle on Eta Carinae, the supernova that wasn't. Meanwhile, while Pluto and Mars may not be at their best this October, the others beckon: Saturn, Venus, Uranus, and Neptune, to name a few, as well as treasures held in the celestial Swan.

Looking for Life on Mars
The first phase of the ExoMars mission arrives at the Red Planet this month to search for evidence of past or present life.
By Camille M. Carlisle

What Caused the Great Eruption?
New theories and observations are helping astronomers solve the mystery of Eta Carinae's 19th-century explosion.
By Keith Cooper

The Backyard Sky: Fall
Say goodbye to summer with these seasonal sights.
By Rod Mollise

Eta Carinae
Watch the newest ideas about how this star exploded unfold in 3D.

Light Pollution Report
Read the latest on the status of light pollution around the globe.

Lunar Librations
Librations and other lunar data for October 2016.

Tower of Light
Saturn, Venus, and Antares fall into line near the end of October.
By Fred Schaaf