Inside the October 2018 Issue 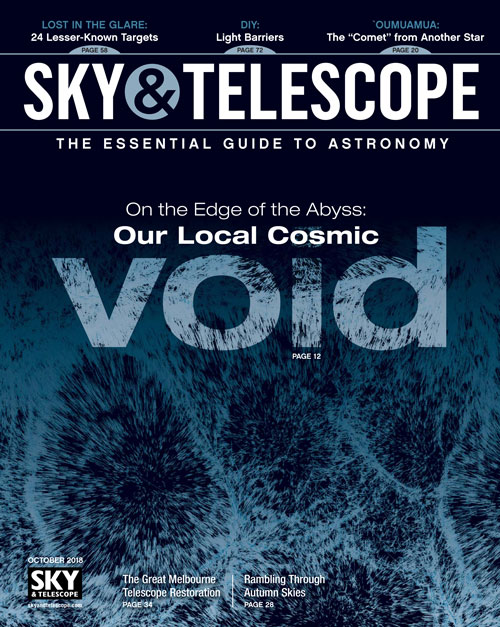 In the October 2018 issue of Sky & Telescope, we explore our galactic neighborhood. Learn about the cosmic void next door that acts like a gravitational hill, helping galaxies to slide together. Hear the whole story about ʻOumuamua — how did scientists find it, what is it, and why are we sure that it came from interstellar space? Our tourist's guide to the autumn sky selects several excellent objects to observe on your nightly journey. And, for the astrophotographers out there, we have a selection of lesser known imaging targets near showpiece objects. Discover the story of the Great Melbourne Telescope and how a team of amateur astronomers are working with museum conservators to restore the telescope using many of its original parts. Check out our observing picks for the month, learn about the hole in the Moon's magnetic field, and spot some beautiful planetaries! Make your own easy and effective light barriers. Plus, we review Meade's new mini astrograph. Enjoy these and other stories in the October 2018 issue of Sky & Telescope.

The Void Next Door
An enormous region of near-emptiness starts on our doorstep, giving astronomers their best chance to probe one of these gigantic cosmic structures.
By Ken Croswell

ʻOumuamua’s Dramatic Visit
The space rock from beyond the solar system has left us amazed and perplexed.
By Greg Laughlin

A Tourist’s Guide to the Autumn Highlights
Ramble through the skies of fall and check in on some favorite targets.
By Jerry Oltion

New Life for the Great Melbourne Telescope
Australian groups are restoring what was once the world’s largest equatorially mounted telescope.
By Trudy E. Bell

Lost in the Glare
Some interesting objects await imagers who can tear their cameras away from the showpieces of the night skies.
By Ron Brecher

10 New Moons for Jupiter
Read the original article in full about Jupiter's 10 tiny new moons researchers found over 18 months, bringing the total to 79.

Organics Inside Enceladus
Want to learn more about the organic molecules found on Enceladus and whether they're complex enough for life? Read the full story here.

NASA’s Dawn Probe Reaches Its Low, Final Orbit
NASA's Dawn spacecraft has entered a new and final orbit that will take it less than 30 miles above the surface of asteroid Ceres.

The Sea Goat in the Skies
The ancient constellation Capricornus bears an interesting history.
By Fred Schaaf

Another Bright Comet?
Comet 38P/Stephan-Oterma is ideally placed in the northern skies this month.
By S. N. Johnson-Roehr

A Hole in the Moon's Magnetic Field
Astronomers propose a new origin for this mysterious magnetic void.
By Charles Wood

I Love Planetaries
How do I love these deep-sky wonders? Let me count the ways.
By Sue French