Inside the September 2019 Issue 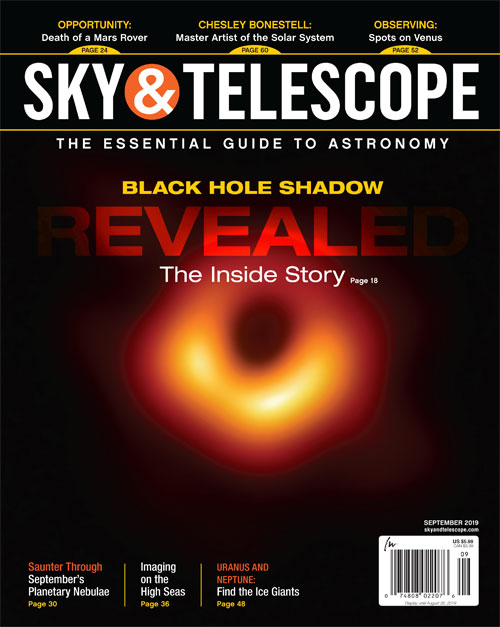 Black Hole Revealed, Postcards from the Future, and Ice Giants on the Rise

We live in exciting times. After more than a decade of coordination, observing, and analysis, the team behind the Event Horizon Telescope has captured a black hole's silhouette — and Science Editor Camille Carlisle shares the inside story of how they did it. This is one postcard from the future that Chesley Bonestell didn't paint, but he thought of almost everything else in his futuristic artwork that defined the genre of space art. That future contains ends as well as beginnings, and we pay tribute to Oppie, the long-surviving rover on Mars. Even as we career headlong into that future, though, some things never change. Uranus and Neptune rise to prime observing season and Venus provides a tantalizing view. The arch of the Milky Way provides contributing editor Fred Schaaf with musings on eternity. In this issue, you'll also find a binocular guide to an open cluster in Cepheus, the timing of the full harvest Moon, a lunar occultation for southwest America, and for those who want to go really deep: microquasars.

The Face of a Black Hole
Here's how a worldwide team of scientists detected the "shadow" of an event horizon.
By Camille M. Carlisle

Favorite September Sights
Join the author on a saunter to admire some of his favorite planetary nebulae.
By Ted Forte

Imaging on the High Seas
Take advantage of dark skies on your next luxury cruise.
By Greg Redfern

Postcards from the Future
Groundbreaking space artist Chesley Bonestell painted the future that we live in today.
By Donald Vaughan

How Does the Event Horizon Telescope Work?
Coordinating telescopes across the globe to create an image of a black hole's "shadow" isn't easy. Here's how they did it.

NASA's Artemis Budget: The Full Story
The budget to fund NASA's Artemis program received a boost — but will it be enough? Read the full story here.

The Month of the Harvest Moon
The smaller planets are largely missing from September's skies, but the two gas giants are joined by the two ice giants — and the full Moon heralds the harvest.
By Fred Schaaf

Cool Hunting
You've seen Uranus and Neptune — but have you found their moons?
By S. N. Johnson-Roehr

The Mysterious "Star Spots" of Venus
Could these bright patches be related to volcanism?
By Thomas A. Dobbins

Foxfire Nights
Vulpecula's dearth of bright stars is offset by its wealth of deep-sky objects.
By Sue French

a great mag going to waste

If you are having trouble accessing your digital issue, you can contact customer service at [email protected].

For what it's worth, I subscribed for the first time yesterday, received an introductory email and still have zero idea how to access my digital subscription. Following the Magazine -> Your Digital Issues link takes me to the zinio site, which I registered for, but the subscription isn't showing up.

Hunting around in help, I find references to [email protected], which I've tried, but that's different than the email you list.

I now have three separate logins for one service, one for this website, one for zinio, one for subscription management.

All of this is to say that the on-boarding experience should be better. At the very least, if there are multiple things to do (logins to create), the initial email should provide some guidance, or links to guidance, or there ought to be something searchable under the Help heading that makes this clear.

Dear dswager, I apologize first of all for the outdated link in our navigation. I've updated this link. We have just moved our digital issue provider back to Nxtbook Media. You can visit this link for the most recent issue: http://www.nxtbook.com/nxtbooks/aas/st_201911/. You will need to enter your email to access the issue. As long as you have a digital or print+digital subscription, you should be able to access the publication. If you have any problems with subscriptions, please contact subscriber customer service at [email protected].

Note that we are working on overhauling the website, and single sign-on is a priority to reduce the confusion associated with multiple log-ins. I apologize for the confusion you experienced yesterday.