One of the reasons that I postponed purchasing 15x70 binoculars so long is that I already owned a 70-mm refractor that I routinely use at 16X for wide-field browsing. Would the binoculars duplicate a capability that I already have? Or would the benefits of using two eyes make binocular viewing an entirely different experience? 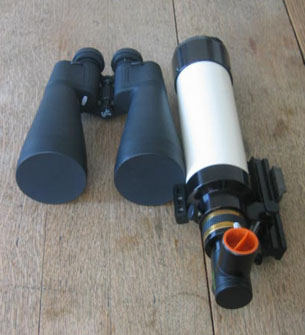 A short-focus 70-mm refractor is a close match for 70-mm binoculars in size and weight, and has overlapping capabilities.

The answers, not surprisingly, are yes and yes. There's a huge amount in common between 15x70 binoculars and a 70-mm telescope operating at 16X. And the telescope's ability to achieve different magnifications by interchanging eyepieces makes it a far more versatile instrument. Even so, there are some aspects of binocular astronomy that cannot be duplicated by any instrument with a single main lens or mirror.

My first impression on comparing views between the two instruments was how much brighter everything appeared in the binoculars — both the targets I was viewing and the sky background. To verify this, I tried covering each of the binoculars' main lenses in turn. And sure enough, as soon as I restricted my binoculars to single-eyed use, the sensation of brightness was greatly reduced.

At some level, this is an illusion. The image formed on one retina doesn't change when the other retina is taken out of service. But somehow things seem brighter when the brain combines the images from the two eyes. You can see if this is true for you with any set of binoculars; covering one lens of 7x35 binoculars should have exactly the same effect as covering one lens of 15x70 binoculars. I find the change in apparent brightness is smallest in an urban environment, where everything seems bright even with one eye, and greatest under dark skies. 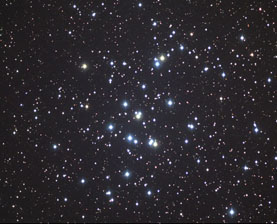 The Beehive Cluster, Messier 44, is one of the few celestial objects that's more spectacular through binoculars than through large telescopes.

That was the general pattern. I viewed dozens of objects with both instruments, and for the vast majority, the improvement yielded by using two eyes paled in comparison with the improvement from increasing the magnification. But there were two exceptions, which I found quite instructive.

The Beehive Cluster, M44, contains several stars that are strikingly orange or reddish when viewed through large instruments. (In most other respects, a large telescope fails to do this cluster justice, because its field of view is to big to fit and frame the cluster well.) I could make out just a hint of these hues through my 70-mm refractor, and boosting the magnification made little difference. But through the binoculars, the colors stood out well on first glance. Apparently using two eyes is a big help for seeing color in faint objects. 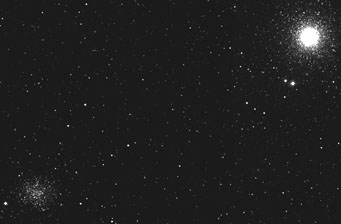 The globular star clusters NGC 5053 (lower left) and M53 fit easily into a single binocular field of view, but the fainter cluster's glow is hard to see through small instruments.

The other case was the globular cluster NGC 5053 in Coma Berenices. It's quite large — nearly as big as neighboring M53 — but it's just one-fifth as bright, giving it very low surface brightness. And its borders are vague. That's exactly the kind of object where extra magnification is least useful. Indeed, I could not see NGC 5053 through my 70-mm refractor at any magnification. But there it was in my 15x70 — extremely subtle and hard to see, but visible nonetheless.

That replicates the common experience with other large, diffuse, low-surface-brightness objects such as the Triangulum Galaxy, M33. This galaxy is readily visible under dark skies, but novices usually have great difficulty spotting it under suburban conditions. And it's famously easier to see through binoculars, even quite small ones, than through telescopes with much larger apertures. The single situation where two-eyed vision is most helpful is for viewing large features with very subtle contrast. That's my experience, anyway.

Still, working better on two objects out of several dozen isn't a lot. And in many ways, my 70-mm refractor is much easier to use than the 70-mm binoculars. There's no practical way to hand-hold it, but it's designed to fit easily on a photo tripod, whereas photo tripods and binoculars are an awkward match at best.

In binoculars, you look directly toward your target, but the telescope is equipped with a "star diagonal" to let you look at right angles to the way the scope is pointed. This cuts both ways. As I said in an earlier article, the connection with the unaided-eye view that's so strong in 7X or 10X binoculars is beginning to stretch thin at 15X — but it's still there. The right-angle view pretty much destroys that connection as far as I'm concerned. On the other hand, viewing objects high in the sky is vastly more comfortable with the star diagonal.

If I really wanted, I could buy a straight-through erecting prism that would let me look through my telescope exactly as I look through binoculars. The fact that I've never so much as considered doing so indicates that the benefits of the star diagonal far outweigh the disadvantages for me.

So what are big binoculars good for? The answer is really pretty simple. Yes, I can see almost every object better through my 70-mm scope than through the 15x70 binoculars. And yes, it gives me an equally large field of view. But I have to switch back and forth between low magnification for the wide-field view and high power for the detailed view. To see both a wide field and detail at the same time, binoculars do better than any monocular telescope possibly can.

That's the bottom line. It's no accident that almost all conventional binoculars deliver extremely low magnifications relative to their apertures — it's because that's where two-eyed viewing helps the most. Binoculars are specialized for bright, ultrawide, low-power views. They're one-trick ponies. But it happens to be a very good trick.

Read the earlier posts in the binocular stargazing series:

I enjoyed your comparisons and you bring up something I have recently wondered about. Do you think a 70mm scope with binoviewers would be comparable to the view with the 15 x 70 binos, i.e. wide field and detail? Or are binoviewers just not as effective as pure bino viewing?

Brent's question comes up quite frequently. The answer is that for low-power, wide-field viewing, binoviewers actually make things worse, not better. A binoviewer splits the light from a single objective into two beams, so that each eye can see one beam. The problem is that each beam ends up just half as bright as the original — in this case, half as bright as the beam from 70-mm binoculars. Some of that brightness is regained when the brain recombines the images from the two eyes, but not all of it. So you actually end up seeing less faint detail than you would using the same scope without the binoviewer — let alone using 70-mm binoculars.

Binoviewers are mainly useful at the opposite end of the spectrum, for viewing bright objects like the Moon and the planets at medium-to-high magnifications.

There's also a practical issue to consider. Binoviewers require a huge amount of in-focus — much more than most conventional telescopes can provide. This is usually solved by putting a Barlow lens (or equivalent) ahead of the binoviewer. That effectively increases the telescope's focal length, making it impossible for it to deliver genuinely low magnifications.

Great series of blog entries on binoculars. I wish you had been writing these and similar entries 6 years ago when I started pursuing amateur astronomy. I currently have 6 pairs of binoculars and find that just 3 of them are perfectly adequate for all my uses. Please don't ask about telescopes, lol.

Thanks for your blog -- I am a beginner, but an ancient stargazer... just like looking and don't know many constellations. I don't have a telescope, so when I really want to check out something, I use my Swarovski's. Not as good, but better than my naked eye. I was checking the sky tonight -- Monday night, while I was driving from MD to PA, I was watching the sky -- saw a very intense light surrounded by dust, the only really bright light in a cloud that night. At first, I thought it might be a comet, but hadn't heard any news about one. I finally went online tonight, and of many, many I have visited, your site is the first to mention the Vesta Asteroid. I'm in PA, it's hanging in the West/Southwest sky, about two hands above the horizon. Couldn't see much with the binocs, and said "I need a telescope." Came in, found your site, and your blog about this subject. I look forward to learning more. Thank you!

The bright light that you saw couldn't have been Vesta, because Vesta is only visible to the unaided eye under superb sky conditions, and even then it appears quite faint. If you were driving west in the early-to-mid evening, what you saw was almost certainly Venus, which outshines everything in the sky except for the Sun and the Moon by a huge margin.

enjoyed your comparison between binocs and scope of same aperture. I built a 60 mm refracting binoc which accepts various oculars and works best about 25 to 35x which is just about right for the aperture - max magnification with still enough light to see what is going on - it absolutely leaves a 60 mm refractor behind in terms of 1. aparent image scale, 2. low light contrast 3. image detail. Your internal image processing delivers free of charge about 20% larger image, 40% improved contrast and about 40% increased fine detail - if you use both eyes. take a look at my "why binocular" page posted at http://nitelite.info, it you have a minute. You are absolutely right about the poor ergonomics of regular binocs - looking up and straight through hurts the neck! I expect, were you to tear down the big binocs you have, use a two tube scheme similar to my 60 mm binocs, use 90 degree diagonals and more magnification, you would never use the 70 mm "telescope" again. The things the guys say about the big binocs (see my pages on my 6,12 and 17.5 inch binocs) are true and hold tru for binocsw of all sizes - when a guy is looking at ngc whatever and admiring spiral arms, if we cover one secondary mirror he promptly inquires as to what happened "where's the light gone, where did the arms go?" He just lost the free image processing. Hope I can turn you to the "bright side."

Hey Tony, got to tell you man it was a fantastic of your experience you shared here with us! Could stop myself to share it with my readers! 🙂