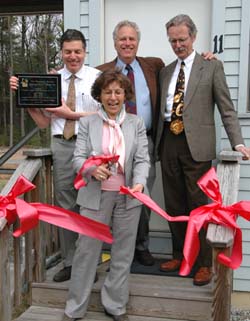 Under a sunny blue sky this afternoon [April 11, 2006], a crowd of 75 scientists, engineers, distinguished officials, and space enthusiasts cheered and raised champaign glasses as Harvard engineer Paul Horowitz and his wife cut a big red ribbon on the steps of a squat wooden building. Poking skyward from behind the building's roll-off roof was an unrecognizable structure wrapped in reflective gold fabric. It was the newest and largest optical telescope east of the Mississippi. And it represents the next step in what could be humanity's grandest scientific quest, though perhaps the one with the slimmest odds of success.

The telescope, at Harvard University's Oak Ridge Observatory site in the rural town of Harvard, Massachusetts, is the world's first large telescope designed solely for optical SETI: searching for light signals that might be sent across interstellar space by civilizations as far as several thousand light-years away. 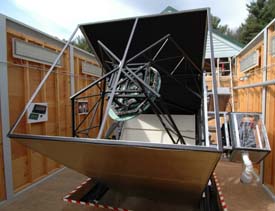 This 1.8-meter f/2.5 reflector has been optimized for detecting pulses of laser light transmitted by alien civilizations. The system's cluster of ultra-high-speed photoelectric detectors is in the clear box mounted on the right side. The primary mirror is in the bottom behind the large white cover. The tilted secondary mirror, in the foreground, directs the telescope's light to the camera.

Horowitz is an electronics professor and, for the last 20 years, one of the world's leading radio and optical SETI engineers. "While this search is undoubtedly a long shot," he told the crowd, "the payoff would be profound. It would be without doubt the greatest discovery in human history," one that would "end 4½ billion years of Earth's cultural isolation."

Laser signals, scientists are convinced, could be as efficient and economical as radio for sending messages between the stars. Several optical SETI experiments are already under way, but the Harvard All-Sky Optical SETI Survey inaugurated today is much more ambitious. It will scan not just a few thousand chosen stars, but more than half of the entire celestial sphere, including tens of millions of stars. In terms of sky coverage, it marks a 100,000-times improvement over Horowitz's previous optical SETI project: a search for laser signals in the light of stars that were having their radial velocities measured with a 61-inch Harvard telescope just a few yards away. 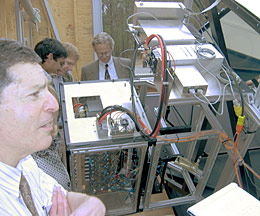 Paul Horowitz (left) stands with the world's best optical SETI camera (box at center), which he and his students designed and built.

The $400,000 project has been funded mostly by The Planetary Society. The 72-inch (1.8-meter) telescope could be built so cheaply because it uses a low-precision "light bucket" mirror that forms images with only 2-arcminute resolution, no sharper than views seen with the human eye. But this is fine for the intended purpose: looking for spots in space that flash with even just a few photons for as briefly as a billionth of a second.

Any alien signalers would have two reasons to choose such brief laser pulses. The pulses would be plainly artificial; nothing in nature can do anything like this. And at such a high time resolution, they would stand out like a sore thumb from the background light of the civilization's host star. In fact, using today's largest pulsed laser on today's largest telescope, we ourselves could send pulses that, for a nanosecond, would outshine our Sun by a factor of 10,000 for viewers thousands of light-years away. 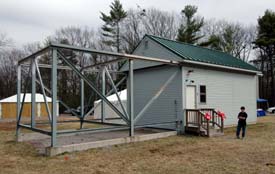 Harvard's new telescope for optical SETI research is housed in this observatory in Harvard, Massachusetts. Featuring a roll-off roof, the building, telescope, and all search functions can be controlled remotely.

To detect such signals, Horowitz and his students custom-engineered a 200-pound camera containing 1,024 state-of-the-art photon detectors that will each make 1 billion measurements per second. This is about the equivalent, Horowitz noted, of reading all of the world's books in print once every second.

The detectors form grids in the telescope's focal plane covering a patch of sky 1.6° tall by by 0.2° wide. This patch will scan a strip of declination continuously around the sky as the Earth's rotation sweeps the telescope in right ascension. The telescope always points to the sky's north-south meridian; it can aim up and down but not side to side. 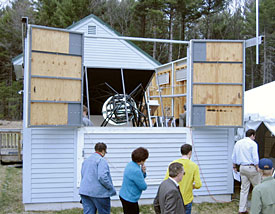 The telescope open to the sky. The bright tilted disk is the flat, 36-inch secondary mirror.

It should take about 200 clear nights to scan the entire sky between declination +60° and –20°, with each spot on the sky getting about 1 minute of scrutiny. Given New England's weather, that will take 1 to 2 years. After that, says Horowitz, the plan is to repeat the sky scan several times — to add more minutes of search time for each sky spot.

Horowitz also hopes to build an identical second copy of the telescope and camera at another site so the two can observe in parallel. This should reduce the expected false-alarm rate to zero, allowing observations to be done at greater sensitivity and quickly nailing as genuine even the weakest actual signal from the stars.

For more on all the world's SETI projects, both optical and radio, see our article SETI Searches Today. Or go directly to its optical SETI page. More on optical versus radio searches is in Seth Shostak's article The Future of SETI.

Alan MacRobert, who read Carl Sagan's Intelligent Life in the Universe at age 15 (and had him as a professor at 17), has maintained Sky & Telescope's SETI Section on the web since 1999.