Like many of us, neutron stars sometimes pack on more pounds than they should. We all know how humans get fat: by eating too much and exercising too little. But nobody knows how a handful of neutron stars end up heavier than the rest. So the apparent discovery of two new examples left astronomers scratching their heads at last week's meeting of the American Astronomical Society in Austin, Texas. 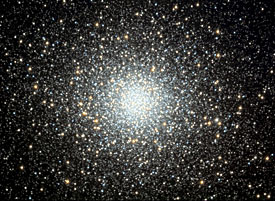 Globular cluster Messier 5 is about 25,000 light-years away in Serpens. Among its hundreds of thousands of stars is at least one millisecond pulsar — possibly one of the most massive neutron stars in our galaxy.

A neutron star is the remnant core of an intermediate-mass star, one that began its life with 8 to 20 or 30 times the mass of the Sun. As such a star evolves, it fuses light atomic nuclei into heavier and heavier ones. Eventually an iron core begins to build up at the star's center. Under the incredible pressure of the star's overlying layers, the core gets so highly compressed that the electrons in its constituent atoms pack down as tightly as the laws of quantum mechanics allow — a state termed electron degeneracy. If the core's mass grows to 1.44 Suns, the so-called Chandrasekhar limit, not even electron degeneracy can hold it up. The core suddenly collapses; its protons and electrons merge to form neutrons, and the sudden release of energy blows the rest of the star to smithereens in a supernova explosion. What's left is a 5- to 10-mile-wide neutron star — now held up by neutron degeneracy — surrounded by a glowing cloud of gas filaments.

That's the theory, anyway. It explains why nearly every neutron star discovered so far weighs less than 1.4 solar masses. It also explains why astronomers are puzzled by what Paulo Freire (Arecibo Observatory) and his colleagues think they've found in the globular clusters Messier 5 in Serpens and NGC 6440 in Sagittarius: neutron stars with masses of about 1.9 and 2.7 Suns, respectively.

The objects in question are millisecond pulsars: highly magnetic neutron stars spinning hundreds of times per second and spewing streams of particles and radiation that sweep past Earth with every turn. These objects are members of binary systems. Isolated neutron stars spin "only" a few times per second, but those in binaries can spin up to much higher rotation rates by accreting matter and angular momentum from their companions. Globular clusters are particularly rich hunting grounds for millisecond pulsars, because their high stellar density leads to an abundance of multiple-star systems. 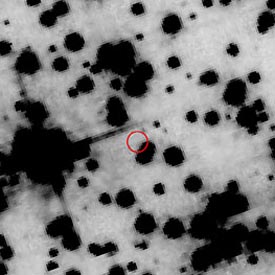 This close-up from the Hubble Space Telescope shows the position within globular cluster M5 of the millisecond pulsar known as M5 B. Astronomers are 95% certain that M5 B's radio pulses come from within the red circle, which is 0.4 arcsecond wide. Both the pulsar and its low-mass companion are too faint to show up in this exposure.

M5 B is the more compelling of the two new discoveries. Using the giant radio telescope at Arecibo, Puerto Rico, Freire and his colleagues have monitored its pulses over a period of 18 years, leading to an extremely precise characterization of the binary. They derive masses of 1.94 ± 0.18 Suns for the pulsar and 0.16 ± 0.10 Sun for the companion. They can even detect the slow wander of the system's orbital axis predicted by Einstein's general theory of relativity. The millisecond pulsar in NGC 6440 was first detected only last year, so it'll be a while before Freire's team has enough timing measurements to confidently claim that it's even more massive than the one in M5 — though that's what they're guessing based on the observations they've made so far.

Our understanding of neutron-star interiors is still in its infancy. "Nobody really knows how matter behaves deep inside such an object," says Freire. To permit masses as high as that of M5 B, astronomers' models will have to be modified to treat neutron-star matter as more incompressible ("harder") than theorists expected.

The existence of such heavy neutron stars also argues that their inner material does not get squeezed into a sea of exotic "quark matter" rather than remaining as discrete neutrons (each of which consists of three quarks bound together in a package). An undifferentiated sea of free quarks should be (physicists think) more compressible than a sea of neutrons.

There's also the question of where the extra mass comes from. Perhaps a bit of stellar flotsam falls back onto the neutron star after its supernova blast. Or maybe there's a mechanism we haven't hit upon by which neutron stars form with masses above the Chandrasekhar limit. If that's the case, then neutron stars may be more prevalent than we thought — and, by extension, it may take more mass than we thought to overcome neutron degeneracy and produce a black hole.

You can learn more by reading these two technical papers by Freire and his colleagues: "A Massive Neutron Star in the Globular Cluster M5" and "Eight New Millisecond Pulsars in NGC 6440 and NGC 6441."

Thought you would be interested in this.
How dense can matter get? Does a new
kind of physiscs take over?

Having waited years for an overweight neutron star now found, thanks Paulo Freire et al, besides nonexisting gravity waves, Higgs particle etc. I have developed a Radiation Coupled theory of gravitation which leads to Top-Down element evolution in one of the two Eon Cycles of the Universe placing us at present in the hot one where fission rules the day. Previously during the below absolute xero K Cold Eon Cycle any of the larger size neutron stars with c+ polar emission would trace rings, now observed! Fred Hoyle's accretion of the H-clouds took place in the previous cold Eon-Cycle, now here and now cold neutron core stars, planets and the moons fuse and eject elements in the interface causing plate tectonics and emission of smaller neutron 'embryos' like the core of our moon, and evidenced by the circular orbit. This is now occurring with Io, the turn-over of Uranus and the magnetic neutron core near the surface of Neptune which is evidence of the new physics.