A Root of Amateur Astronomy Unearthed 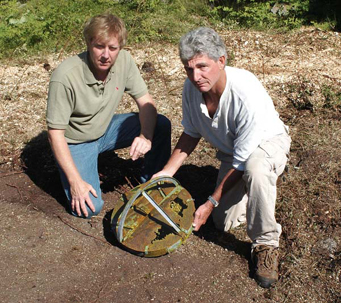 If you found this odd item in the woods near your house, you'd toss it in the nearest dumpster — right? Not Greg Mort (left) and Walter DeVault. When they unearthed it last July, they already knew that telescope-making pioneer Russell W. Porter had once owned DeVault's house in Port Clyde, Maine. And Mort, his next-door neighbor, is a renowned artist and telescope maker.

A rare piece of optical history has surfaced — literally — in the woods of Port Clyde, Maine. Two neighbors in that coastal town, Walter DeVault and Greg Mort, made the find in July, but it took some checking before Mort realized just what they had: It can only be the rusting cell of a 16-inch flat mirror that telescope-making pioneer Russell W. Porter mounted, 92 years ago, on the roof of his Port Clyde home (which the DeVault family now owns).

"The mirror cell was sticking out of the undergrowth and was probably seen by others over the years," says Mort, "but it would be a meaningless gadget to anyone not familiar with telescopes and mirror mounts." 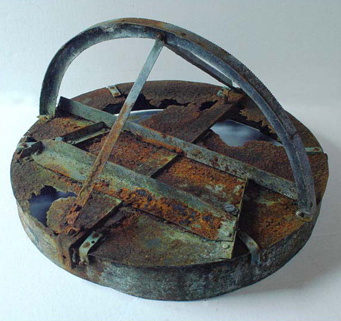 The mirror cell (here face down) is backed with a toothed sector that let Porter control its tilt from within the den of his house.

For Mort, who is a widely acclaimed artist and a telescope maker himself, the discovery gives a rare peek at the hobby's origins in America and the craftsmanship of Porter, its famous prime mover. "The cell is totally scratch built — the angle irons, rivets, and tabs of metal all show hand work and cutting. Adjustment screws on the rear of the mount are whatever he had in the shop at the time. The toothed arc seems, to my eye, to be made from a heavy band-saw blade!"

As far back as 1906, following many restless years as an arctic explorer and struggling artist, Porter had settled in Port Clyde to try his hand at pursuits like farming and building rental cottages. He also took up astronomy and telescope making. At first he made and used smaller instruments, but in 1914 he drafted plans for a unique 16-inch "polar reflector" on the roof of his house. The flat mirror and matching concave primary fed starlight to an eyepiece down in the warm den below. There, in cozy comfort, Porter watched the stars and planets during the bitter Maine winters. 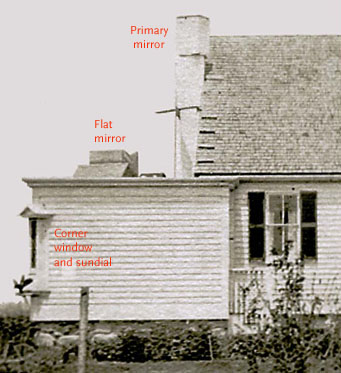 The polar telescope's main parts are visible (but covered) in this circa-1915 photograph of Porter's home in Port Clyde. The tiltable flat mirror directed starlight from various parts of the sky up along an imaginary polar axis to a 16-inch f/12 primary mirror on the taller pier in back (note the access steps on the roof). After reflection, the light returned to the flat's vicinity where a much smaller diagonal mirror redirected the beam to its final focus in the heated den.

Porter was so pleased with his indoor-eyepiece design that he wrote it up for the May 1916 issue of Popular Astronomy magazine. After a few years he moved to Springfield, Vermont, where he encouraged a group of local craftspeople to take up telescope making for themselves. On a hilltop site there, which he named Stellafane, Porter helped organize the annual star parties that continue to this day. He later relocated to California and lent his architectural and drafting know-how to the Palomar 200-inch reflector project. His life is the subject of Berton C. Willard's 1976 book-length biography, Russell W. Porter: Arctic Explorer, Artist, Telescope Maker, which provided the key details Mort needed to identify the old mirror cell.

DeVault and Mort plan to donate the cell to the telescope-making museum at Hartness House in Springfield, where it will join many other exhibits relating to Porter and the hobby. The museum is open to visitors during each year's Stellafane convention.

A piece of urban lore continues to perpetuate the idea that Russell Porter came up with the name "Stellafane."
Springfield Telescope Makers records say that Oscar Marshall proposed the name starting as Stellar Fane, then contracted and Porter merely popularized it. No one in the STM knew that Walter DeVault, a doctor, was the owner of the farmhouse. When I was there the same time that Kelly happened to visit, Bob Ensor implied in a detailed interview that Greg Mort owned it. The 16-inch mount is quite a find after so many years. I discovered the 7-inch telescope pier and surrounding observatory foundation at that time. It was buried in brush and lilac bushes. Bert Willard's book about Porter's life confirms the construction.