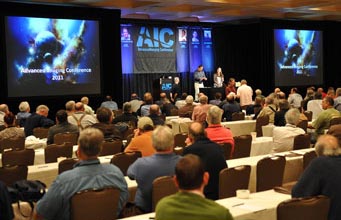 A well-attended session during the 2011 Advanced Imaging Conference in Santa Clara, California.

The 2012 Advance Imaging Conference in Santa Clara, California, this past October continued the trend of recent years with a growing number of participants attending the three-day meeting, which was highlighted by astro-imaging workshops and lectures by some of today’s best astrophotographers. Of special interest was the large vendor area where people could get a firsthand look at the latest imaging equipment and software.

I spent some time speaking with Apogee Imaging Systems’ president Wayne Brown. The company’s unveiling of the new Aspen camera line at the show generated a lot of interest among participants.